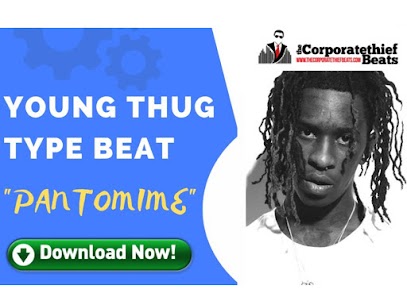 This is my latest melodic type beat called "Pantomime" which has a similar style and sound to that of a Young Thug type beat. It's very whimsical and has a lot of movement in the beat. There isn't really a definitive structure here it's more of a freestyle trap beat with middle 8's that remove the main 808 Drum pattern.

You cloud even label this A Migos Type Beat too because of all the movement of the 808 drum pattern and all the additional ad lips.

Even though the main structure of the beat is quite simplistic the nature of the instrumental is quite busy. You can hear various minuscule adlib sounds that both are very familiar with rappers like Young Thug and The Migos.

The 808 baseline and core drums drive the beat forward. While this weird piano chord structure also acts like a robotic stationary sound. All the additional sounds and effects are what brings this beat to life.

It's clear that there is a whimsical nature to this Young Thug style instrumental it's quite melodic and commercial considering that it has these very weird elements.

There is no real defined structure like verse chorus verse in this instrumental. It's open and free for any hip hop artist to shape it to the position that makes sence to them.

Reading this article on the daily free they described Young Thugs music as....

Young Thug is a godly entity beyond the understanding of us mere mortals. He is an icon and an innovator in every genre that he creates and introduces the world to. The genre would not exist without Young Thug. Before him, there were sounds that hoped to one day be coherent and enjoyable for audiences. He has nearly transcended genre, living within its confines only to please the earthly audience that is ourselves.

It’s an understatement to say that Thugger is a rapper. Those with little knowledge of any aspects of the world like to say he “isn’t a good artist,” his “music is bad” or that “you can’t even hear what he’s saying.” That’s not the point of his music — he is music. His words melt together, creating far more beautiful sounds than anyone before him. He creates new words and sings in a magical fashion incomprehensible to the ear. Source Here

When I was creating the beat I was thinking about creating music that he would rap over, but something I could still see other artists collaborating with him.

I also wanted an instrumental where freestyle trap rappers could use to collaborate with other up and coming artists. I feel that this beat is perfect for rappers that like freestyle rap but want something more commercial and modern with what is popular today.

Over 200+ hip hop beats in various different genres from trap beats to hip hop beats, rnb beats and pop beats we have it all. Make sure that you are subscribed using the link above to get discounts on beats and future products.

About Daniel Hartnett - The Corporatethief Beats

Daniel Hartnett is a beatmaker, audio engineer, music marketer, blogger, and founder of The Corporatethief Beats. His professional music production started at Galway Technical Institute, where he studied live sound engineering and music production. At Galway, Hartnett got the first taste of Logic Pro X, which he now uses for 95 percent of the hip-hop beats he produces.

Moving on, Hartnett continued his music production education at The Academy of Sound Dublin, where he graduated with a Higher Diploma in Music Production and Sound Engineering. He started The Corporatethief Beats website back in 2010 to showcase his beats and music marketing expertise.

For more information on The CorporateThief Beats, visit his website: