Rumours of the signing began when the musician, whose full name is Jermaine Lamarr Cole, was seen in the Rwandan capital, Kigali, at the weekend.

The team’s coach, Alan Major, then confirmed the news to state broadcaster Rwanda TV on Monday.

According to sports news site The Undefeated, Cole arrived in Kigali on Saturday and is currently in quarantine ahead of Sunday’s game.

Rwandan paper The New Times also tweeted a video of Cole wearing a Patriots jersey, adding that he “could feature” in the NBA-backed league. 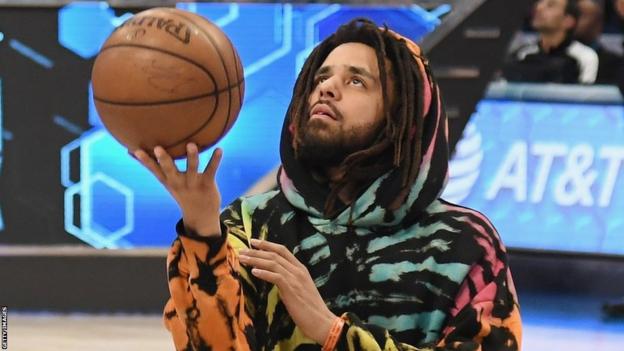 J Cole is known to be a huge basketball fan and has referenced Lebron James and Michael Jordan in his music, but he has no professional basketball experience

In 2012 he appeared in the NBA’s Celebrity All Star game which is held during the league’s annual All Star Weekend.

At the 2019 All Stars game he performed during the half-time show.

‘I believe in him’

J Cole has previously expressed interest in professional basketball, according to some reports. Fellow rapper and basketball player Master P told TMZ last August that Cole was hoping to make it into the NBA.

“I believe in him and I believe that he’s a youngster that has a lot of desire,” Master P said at the time.

The NBA-backed BAL tips off this weekend and the signing of J Cole, although unorthodox, has shone the spotlight on this fledgling basketball league.

If he does make his debut on Sunday, J Cole could come up against former NBA player Ben Uzoh who signed for Rivers Hoppers last month.

The 33-year-old had stints with the then New Jersey Nets, the Cleveland Cavaliers, and the Toronto Raptors as well as playing in Europe.

He was part of Nigeria’s 2015 Afrobasket winning squad in Tunisia and member of D’Tigers team which competed at the 2016 Olympic Games in Rio de Janeiro and the 2019 Men’s Basketball World Cup in China.

Twelve countries from across the continent will have teams in the BAL: Tunisia, Egypt, Angola, Morocco, Senegal, Nigeria, Algeria, Cameroon, Mali, Mozambique, Madagascar and Rwanda.

Christian Eriksen to have heart-starting device fitted after collapse

I Spoke to a Top Virologist in China

Why Ghostbusters: Afterlife’s Jason Reitman Is The Right Director For The Film, According To Dan...