Facebook wants to inspire, apparently. The company announced changes to its News Feed today that are supposed to fill feeds with things users like, rather than the content that annoys them. At the end of March, Facebook began introducing filters to allow users to customize their feed, and now, the company is hoping to learn more about what users like and dislike, with what seems like a special focus on moving away from political content and toward “inspirational posts.”

The company has been under intense scrutiny for helping fan the flames of political division in the US and even playing an outsized role in elections. Facebook’s influence on both issues has largely stemmed from the misinformation that’s been spread on the platform. It’s an issue that seems directly connected to Facebook CEO Mark Zuckerberg taking an aggressive stance in support of replacing Section 230 of the Communications Decency Act in 2020. Facebook hasn’t named a specific alternative it supports, but it generally favors the government having more control (and receiving more blame) for moderating inflammatory speech online.

Facebook’s new survey questions will include gauging whether a post is inspiring.

I’m not sure inspiring posts are the News Feed cure the company should be hoping for, though. Facebook is planning to survey users on what posts they find inspiring to adjust how News Feed ranks content. According to Facebook, users want inspirational content because it “motivates them and can be useful to them outside of Facebook.” It’s certainly a nice idea, but who or what people find inspiring could vary wildly. Per a statement Facebook provided The Verge:

For the purposes of our surveys, we’ll ask people how inspiring they find a given post on their News Feeds, so we’re leaving it up to them as to what they find inspirational. According to feedback sessions we’ve conducted, though, people have told us they find content to be “inspiring” if:

It gives them positive, new ideas to do something different

It’s information that changes their thinking or perceptions

It provokes uplifting and creative thinking

As Facebook suggests in its original blog post, “a photo of a national park can inspire someone to spend more time in nature,” but it’s not hard to imagine other photos and posts that are much more controversial earning a similar rating of “inspiring” from some users. 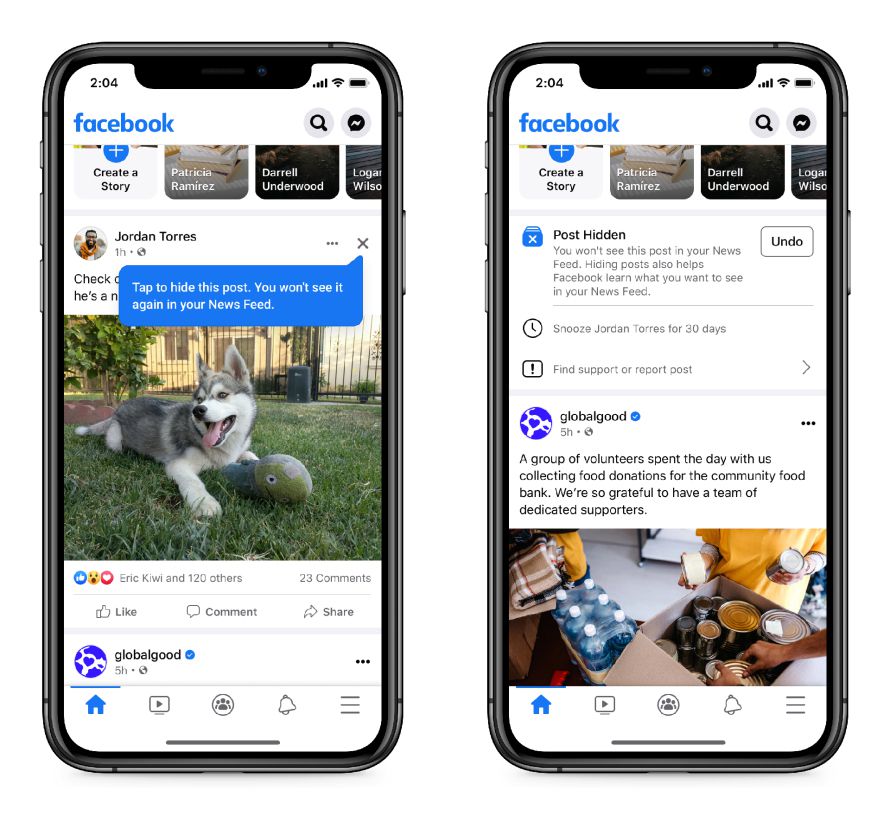 Facebook is testing a new method for hiding psots in the News Feed.

Facebook also says it will ask users what topics they are not interested in, like cooking, sports, or politics (the three types of people) so that it can show them other posts that are relevant to their interests. The company says it’s also testing an easier way to prune posts you might not want to see in your feed via a small “X” in the top-right corner of a post.

Neither of these changes sounds like they would actually help with Facebook’s habit of radicalizing users. If anything, depending on how heavily News Feed weighs those answers, it could lead people further down whatever potentially dangerous rabbit holes they’re already exploring.

While the plan seems vague, engaging with users over their News Feed likes and dislikes is broadly good. Facebook has long seemed focused on maintaining and increasing engagement, at the cost of providing people a healthy environment to talk to family and friends. This survey approach is a small step in the right direction, but it is dependent on people actually participating in the first place, which isn’t guaranteed.

Despite this measure of progress, Facebook still seems slow and reluctant to make big positive changes on its platforms. The company made a drastic change to the News Feed after the US election, boosting authoritative news sources but only temporarily. Relying on surveys and hiding its division problem rather than directly addressing it feel like steps back.

Apple shares a look inside its first ever ‘floating’ store