I’m not old enough to have ever encountered an original IBM Model M in an office. But in my second year of university, after hearing about how amazing these old keyboards were to type on, I sought out an old model on eBay. For the next two years, every essay I wrote was hammered out on a vintage keyboard from 1985. I never took it to libraries or lectures (I’m not a monster), but my second-year roommate must have been pretty happy to see the back of me that summer.

As of this writing, you can still find plenty of decades-old IBM Model M keyboards for sale online, or you could buy a $104 New Model M from Unicomp, a company with its roots in the Lexington-based keyboard factory that produced many of the original Model Ms. The New Model M is big, bulky, and it’s got the same buckling spring switch mechanism that made its predecessor such a treat to type on. It’s not hard to imagine this board soaking up cigarette smoke and coffee on the desk of a 1980s office worker.

When people ask me what it is I like about mechanical keyboards, I usually respond by saying something about how timeless their designs are. IBM keyboards produced in the 1980s still feel great to type on today, and there’s a good chance many mechanical keyboards made nowadays will outlast the computers they’re plugged into. But feeling great to type on isn’t the only thing a modern keyboard needs to do, and that’s where the New Model M falls short.

The New Model M is available in a variety of different configurations. Although its case only comes in black, its keys are available in either gray or, like we have here, white and gray. It’s available with an old-fashioned PS2 connector or more modern USB. (The cable, unfortunately, isn’t detachable like many modern mechanical keyboards.) It’s available with layouts suitable for a variety of countries, including US, UK, Denmark, Finland / Sweden, France, Germany, Norway, and Spain. If you go for a US layout, there’s the option of getting the keyboard with a slightly longer space bar, and Unicomp will also ship the keyboard with a Mac layout. Some of these options come with customization fees. Unsurprisingly, there’s no option for wireless connectivity, just like there wouldn’t have been in the mid-1980s.

Even for a full-size keyboard, the New Model M is large. There’s a border of at least 2cm (0.78in) of plastic around the four sides of the keyboard, and even between the sections of keys themselves, there’s more empty space than you’ll find with most modern keyboards. It’s a tad narrower and shorter than my ’80s Model M, though not by much. It’s also a lot lighter and doesn’t feel quite as sturdy as my original model. It’s not flimsy; it’s just not built like a tank in the same way the old keyboards were. 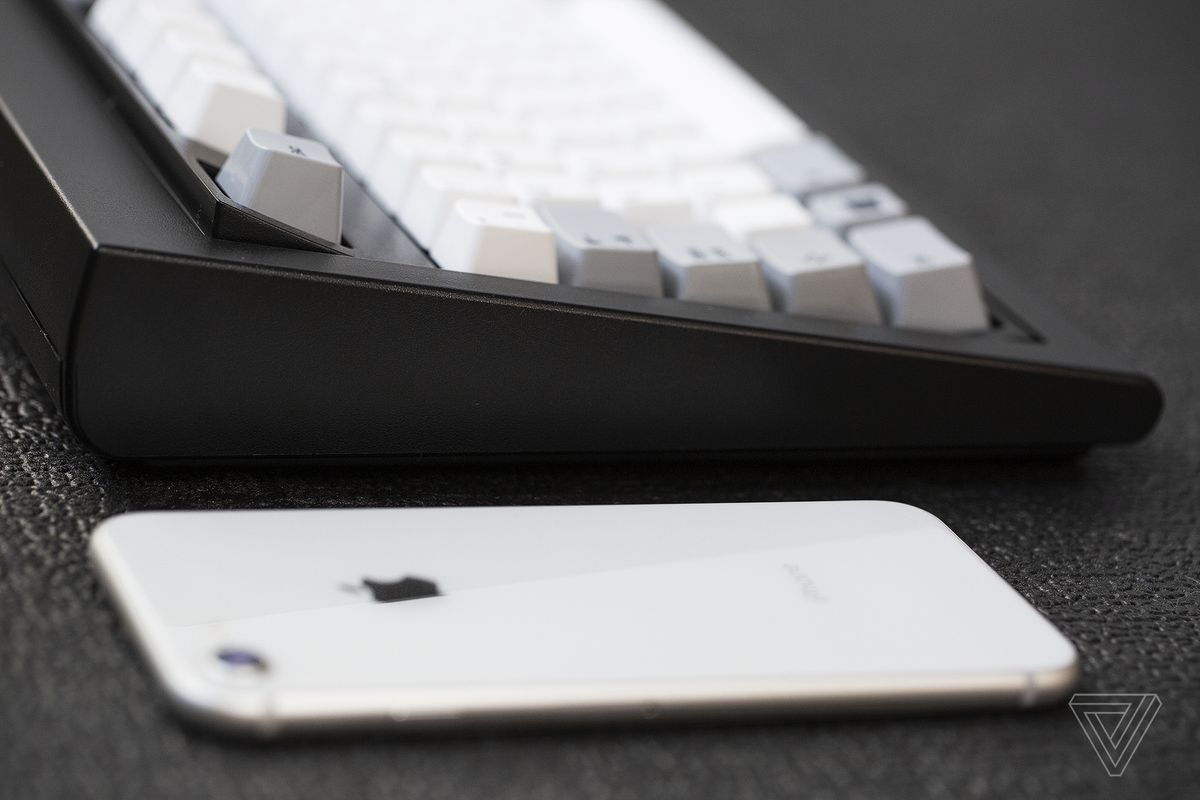 The New Model M is a bulky keyboard. 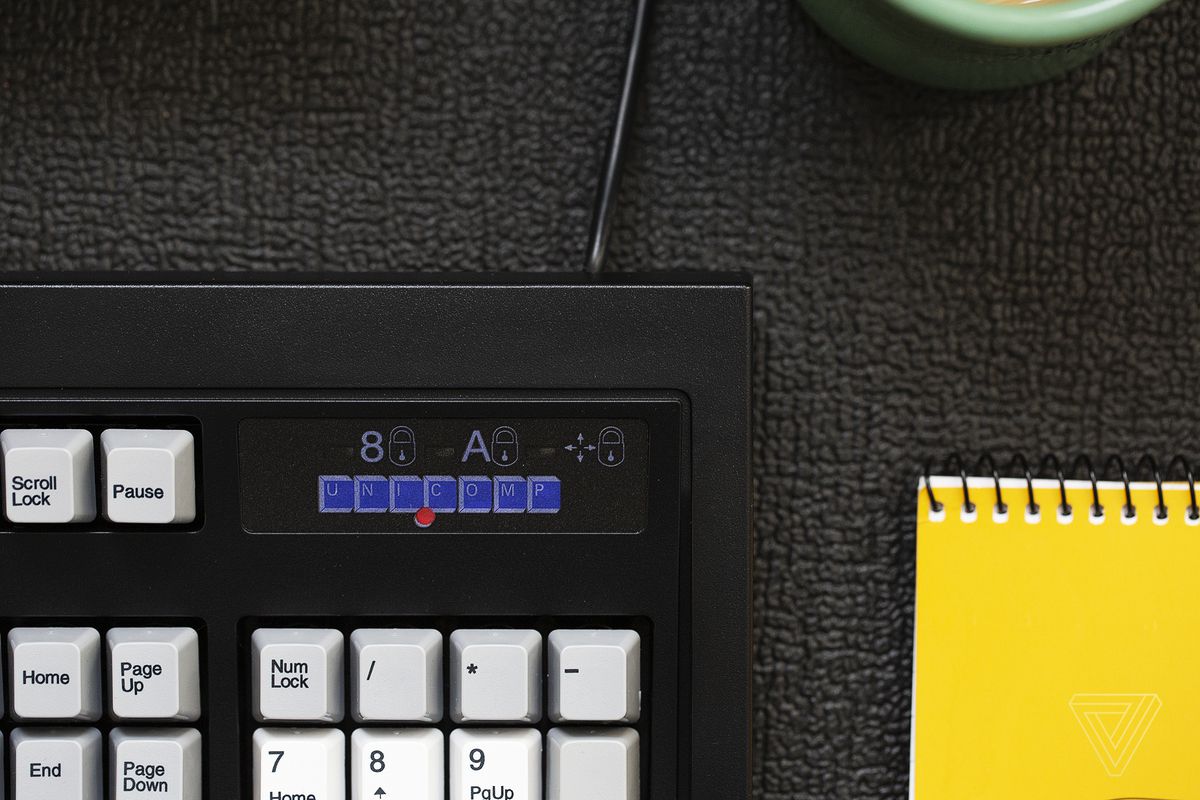 There are obvious practical downsides to a keyboard this big, and space-constrained typists should look elsewhere (or perhaps at Unicomp’s more recent Mini M if you’re prepared to give up the Numpad and could use a detachable USB cable). But if you need a full-size keyboard and you’re even slightly space-constrained, then the New Model M isn’t a great choice.

The overall design of the New Model M I could take or leave. It has a kind of retro charm to it, but the Unicomp logo emblazoned on the top right is dated in an ugly way rather than a charming way, and the blue LEDs that light up when you’ve got caps lock or num lock turned on are an eyesore.

Overall, although build quality isn’t quite as good as an original Model M, Unicomp’s keyboard feels solidly built by modern standards. Its keycap legends are printed on using dye-sublimation, so they’re not going to wear away anytime soon, and they’ve got a slightly rough matte texture that feels nice under the fingers. They’re fairly tall and gradually increase in height from front to the back of the keyboard, with squared-off edges and a slight curvature from left to right. (I’d say they’re closer to OEM than Cherry profile keycaps overall.) There’s a pair of raised bars on the J and F keys to help touch typists find their home row, but they’re subtle and take a little getting used to. 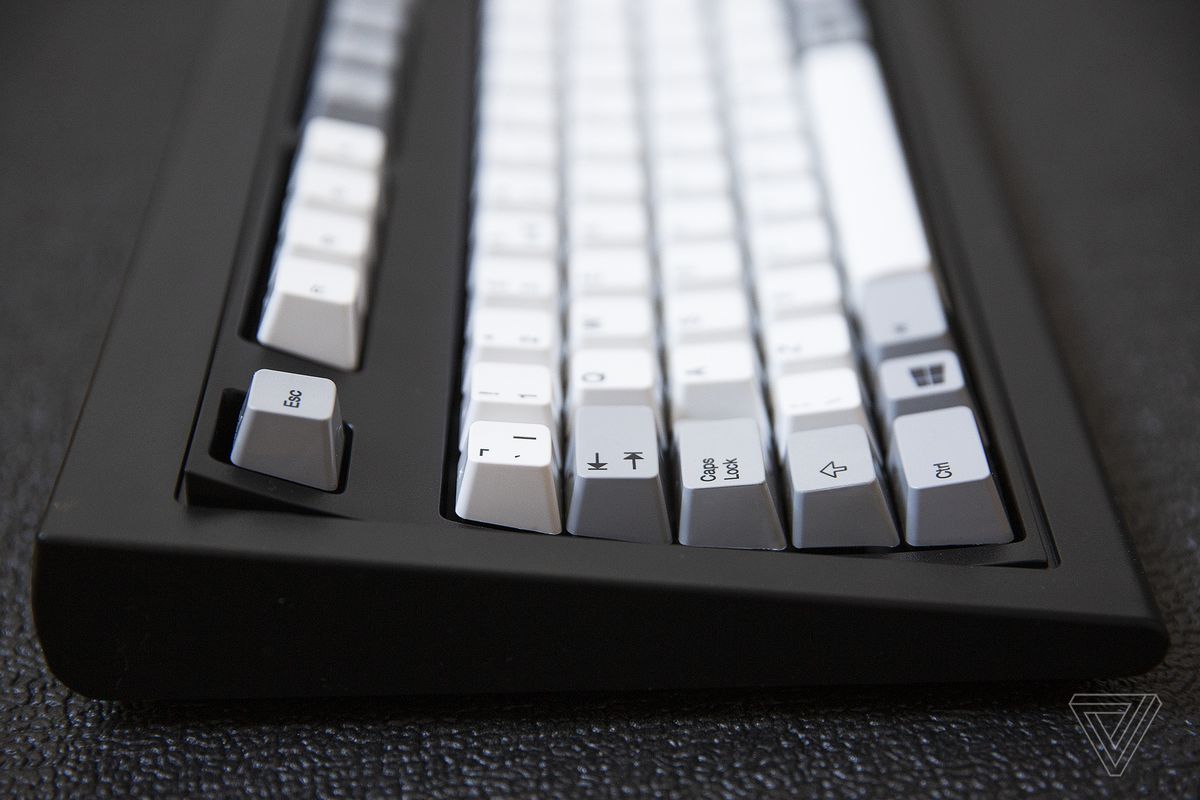 Its keycaps are made of PBT plastic and have a slightly rough texture to them.

The quality and style of the keyboard’s PBT keycaps are important because alternatives aren’t nearly as easy to come by as they are for keyboards for Cherry-style switches. Unicomp does sell replacements via its online store, but if you’re someone who’s interested in buying any of the wildly designed keycaps available across the internet, then be aware that vanishingly few of them are compatible with the New Model M. I also found the keycaps weren’t as easy to remove and replace as the keycaps on Cherry MX-style switches.

It all means the New Model M isn’t the best keyboard for tinkerers. There are no Cherry MX-style switches for you to desolder and swap out, and you won’t be tempted by a seemingly never-ending supply of new keycaps to buy online. That won’t matter for the vast majority of typists, but it’s worth bearing in mind if you’re curious about the weird and wonderful world of custom keyboards. 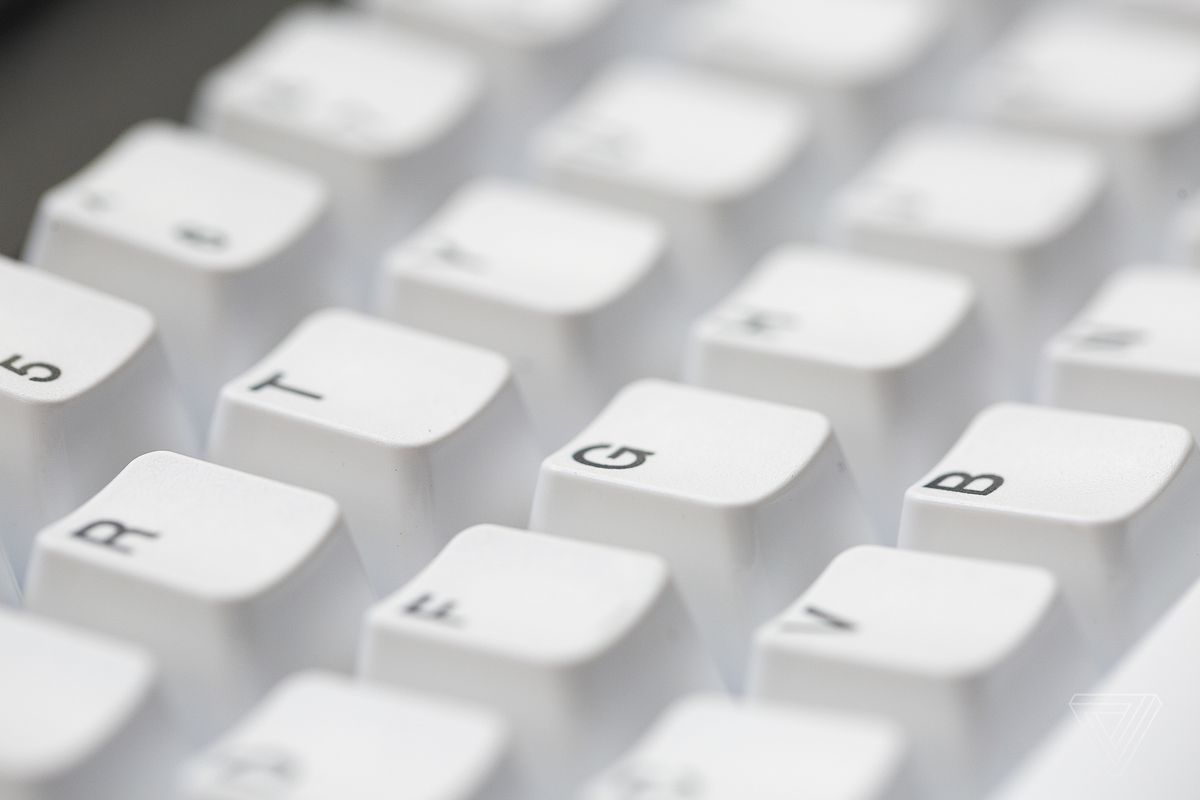 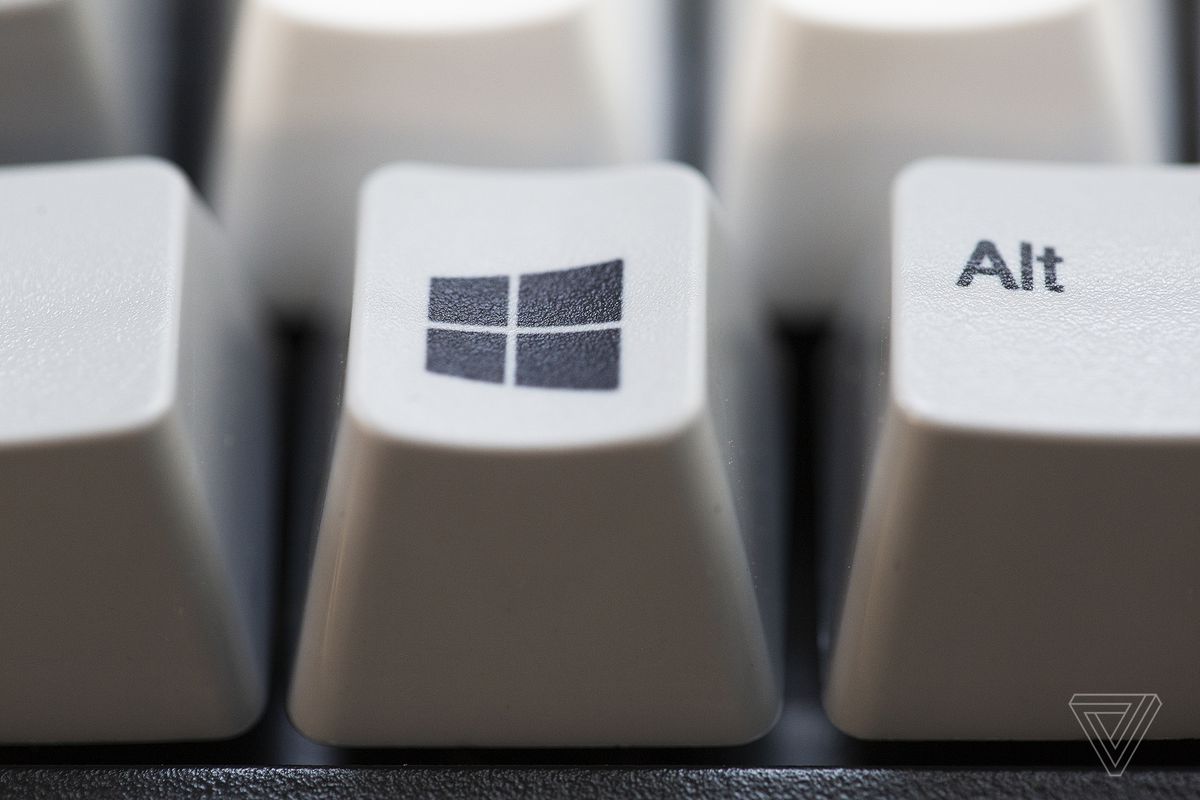 If you’re buying a New Model M, you’re buying it for the typing experience it offers out of the box. Thankfully, that experience is one of the best around. The keyboard’s heavy keys take a little bit of getting used to (I find that typing with my wrists held in the air rather than resting on my desk helps a lot), and pretty soon, the tactile clack of each keypress guides you into a reassuring rhythm. The fact that each key is that little bit harder to press than most other keyboards meant that I mistyped less frequently, making it easy for me to get into a good flow and just enjoy the process. At its best, the New Model M sounds like a glorious cacophony of key-clacking, and it feels every bit as good as it sounds.

People like to give advice about what kind of switches you should buy a keyboard with based on what you’re going to use it for. If you’re a typist, Cherry MX Blues are said to be a good choice, while gamers might be better off with Cherry MX Reds. MX Browns are considered a mix of the two. For the most part, I think advice like this can be a little prescriptive. I know people who game on Blues and type on Reds. 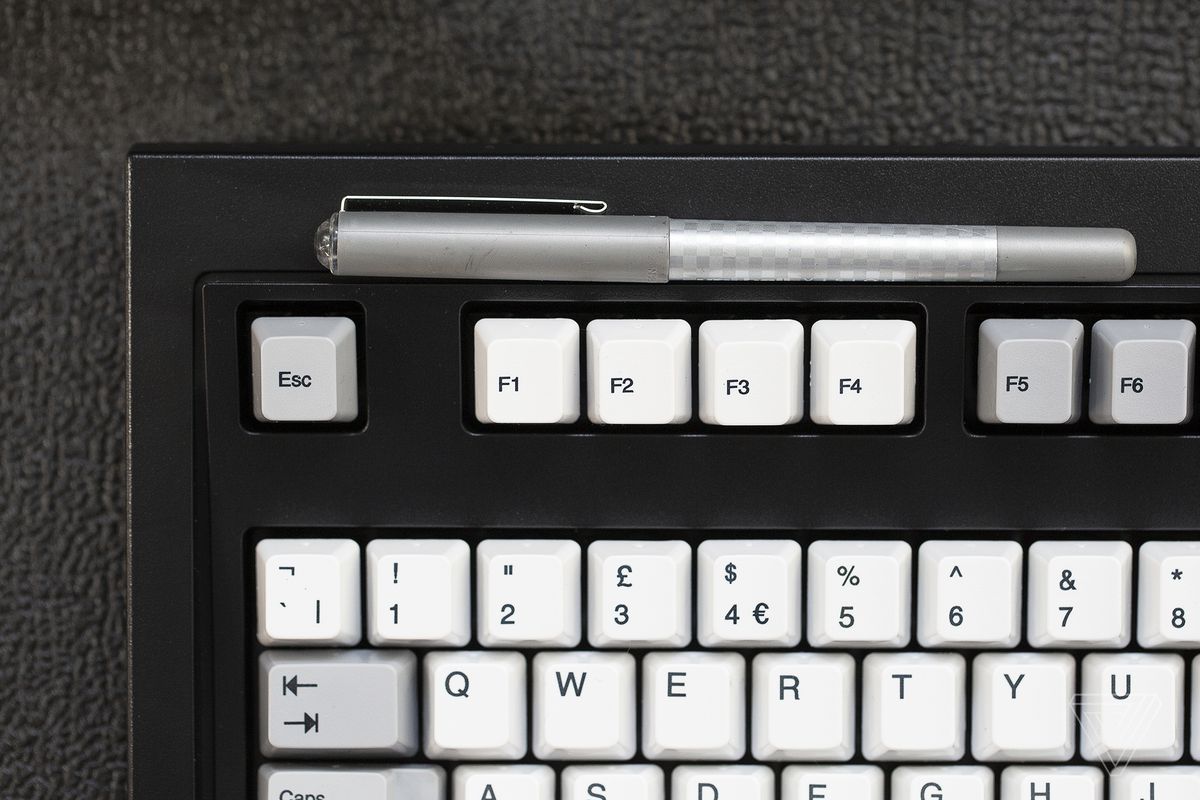 The board is available with white and gray or just white keycaps.

But when it comes to buckling springs, I really do think these are switches for typing and typing alone. That pressure you have to use to press each key is fine when you’re typing, but it can get tiring if you’re holding down a key while playing a game.

Another downside to consider is their volume: buckling springs are loud. They’re so loud that it’s not just an issue if you’re planning on using the keyboard in a shared dorm or office, but their loudness also caused problems for me on Zoom calls. I had to mute myself while on a recent call to avoid disturbing everyone else with my clacking, and I had to turn up my speakers’ volume on other occasions to be able to hear a press conference while I typed up notes. Another time, I managed to completely ruin a recording of an interview because all you could hear was the sound of me clacking away while an interviewee spoke.

If all you do on your computer is type, then the New Model M does that brilliantly. But when you need to use your computer for other things, like playing games or making calls, the keyboard’s lack of versatility becomes obvious. 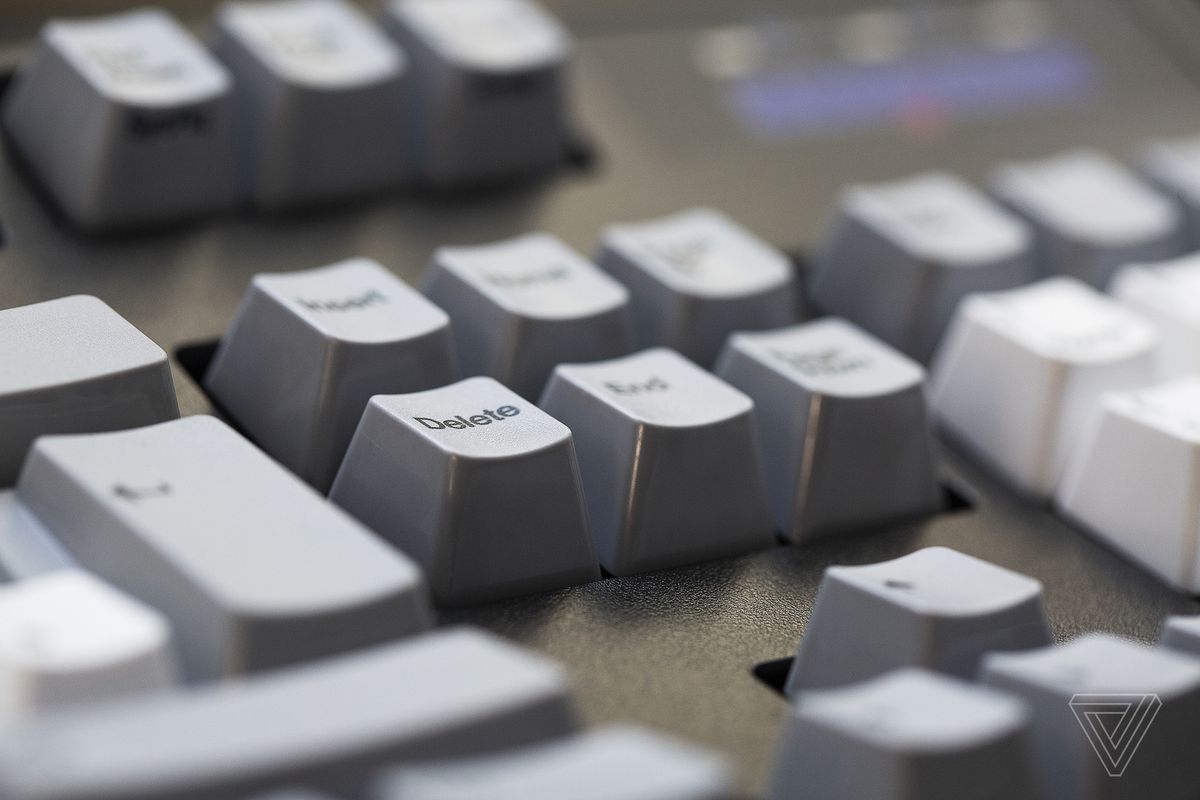 Our model has a UK layout, but it’s also available with a US layout. 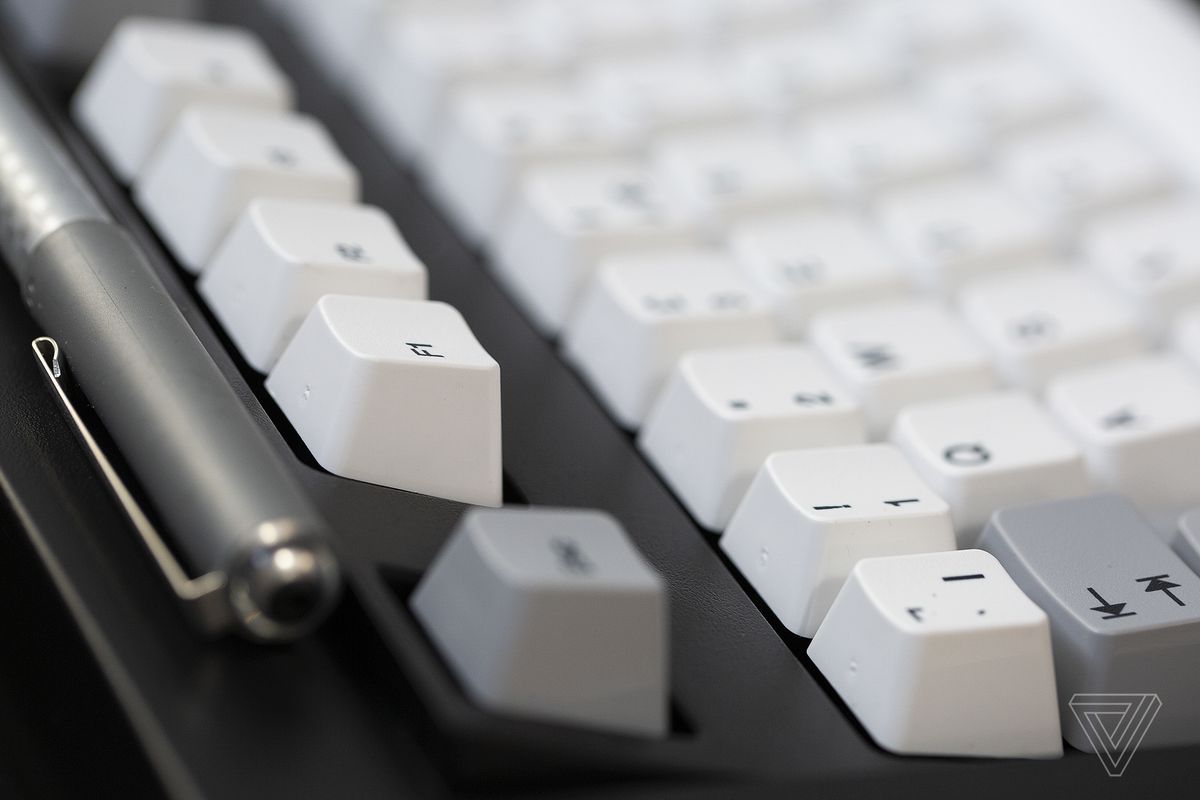 Buckling spring switches feel great to type on, but their loudness can be an issue.

I loved using my IBM Model M, and there’s no way I’m going to part ways with it anytime soon. But soon after I was done with school, I switched to a more modern keyboard with much quieter Cherry MX Brown switches. Ultimately, I needed my computer’s main control peripheral to be good at things that weren’t just typing.

Like its predecessors, when you’re using the New Model M for what it’s designed for, typing, there are few other keyboards around that do it quite as well. People have been clacking away on buckling spring keyboards for decades for good reason. But Unicomp’s keyboard is just as uncompromising as any Model M from the ’80s. It’s too loud for any modern office or video calls, and its stiff switches aren’t great for gaming.

Still, if you’re after the best typing experience around at whatever cost, then the Unicomp New Model M is one of your best options. You just need to understand exactly what “whatever cost” is.

European Super League a ‘spit in the face of all football lovers’, says Uefa president...