But this ThinkPad has a unique feature you don’t see every day: an OLED screen. That, combined with its discrete GPU, puts the X1 Extreme Gen 3 out of the business laptop space that ThinkPads traditionally dominate and into the crowded market for ultraportable content-creation machines. Among those competitors, the X1 Extreme has some significant drawbacks that keep it from reaching the top of the pack. But it still includes the features that have made ThinkPads so dominant across the board, and that means there’s certainly an audience for it.

This model has two absolutely standout features. The first is the keyboard. ThinkPads usually have great keyboards, and this one is no exception. It’s one of my favorite keyboards that I’ve tried on a workstation laptop this year, with the possible exception of the Dell XPS 15. The keys have a comfortable texture and a heck of a lot of travel, without being too loud. The typing experience feels closer to that of a mechanical keyboard than to that of flatter laptop keys. I actually found myself eschewing my personal laptop during my testing period in favor of the ThinkPad because of how much I love typing on it.

There’s a row of useful hotkeys on the top of the deck. New to the X1 Extreme are three buttons tailored to remote work: F9 brings up the notification center, F10 answers calls, and F11 ends calls. There are also keys to cut the volume and microphone, toggle airplane mode, and adjust volume and brightness. 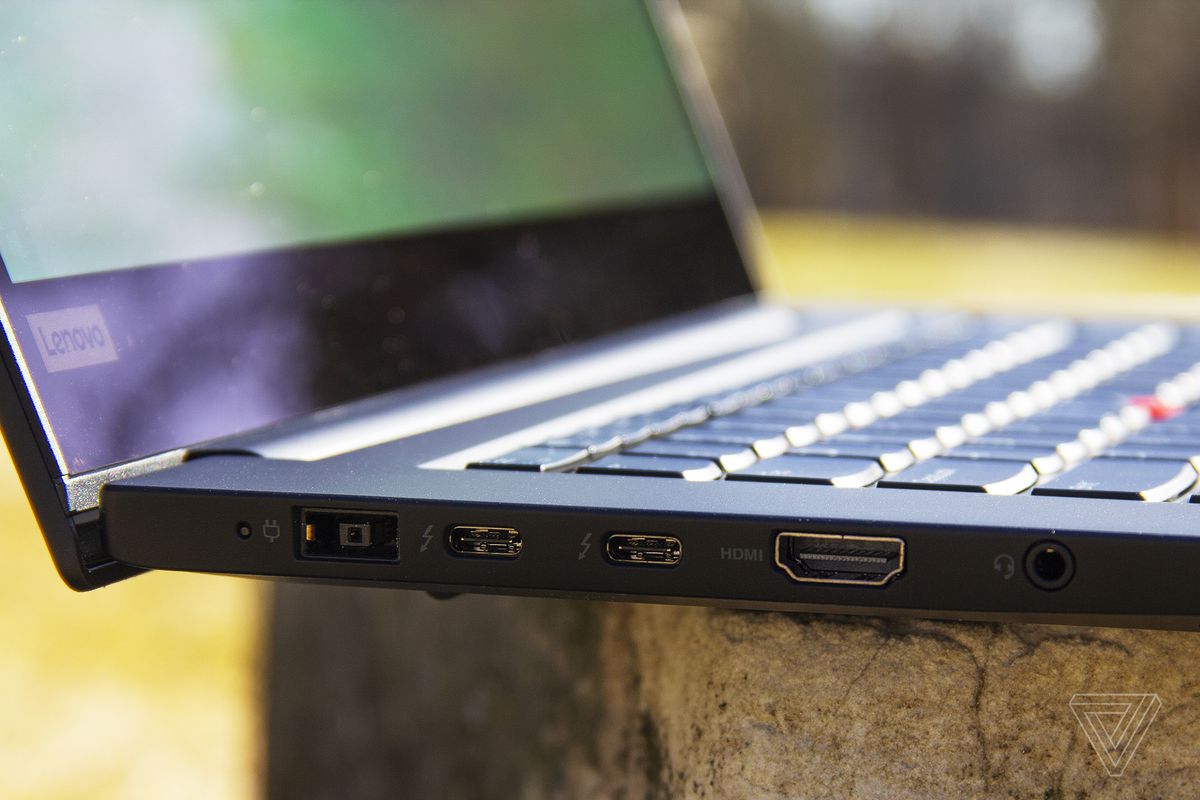 One quick thing about the keyboard: the Fn and Ctrl keys are swapped from the locations where you’ll find them on most keyboards. This is how ThinkPad keyboards have been laid out since forever, and you can remap the keys through the BIOS or with Lenovo’s utility app if you prefer. But if you’re not a regular ThinkPad user, or you’ll be swapping between this machine and a personal laptop, it’s worth noting that it’ll take time to adjust (or you’ll be using mislabeled keys). I’ve been using the X1 Extreme for almost a week, and I’m still accidentally hitting Fn all the time.

The second standout feature is the 15.6-inch 4K OLED panel. It covers 100 percent of the sRGB spectrum, 100 percent of Adobe RGB, and 100 percent of P3. (Basically, it maxed out our colorimeter.) The panel is sharp and vibrant with great contrast. You can watch streaming content that supports HDR and swap between various color profiles with Lenovo’s Display Optimizer.

Build quality is another strength. Like most of its ThinkPad siblings, the X1 Extreme feels quite durable. There’s no flex in the keyboard or lid, and Lenovo says it’s been tested against “12 military-grade certification methods and over 20 procedures” for resistance to vibrations, shocks, extreme temperatures, humidity, and the like. The laptop achieves this without sacrificing much portability. It’s on the thick side at 0.74 inches — but at four pounds, it’s lighter than many competitors including the Dell XPS 15 and the MacBook Pro 16. 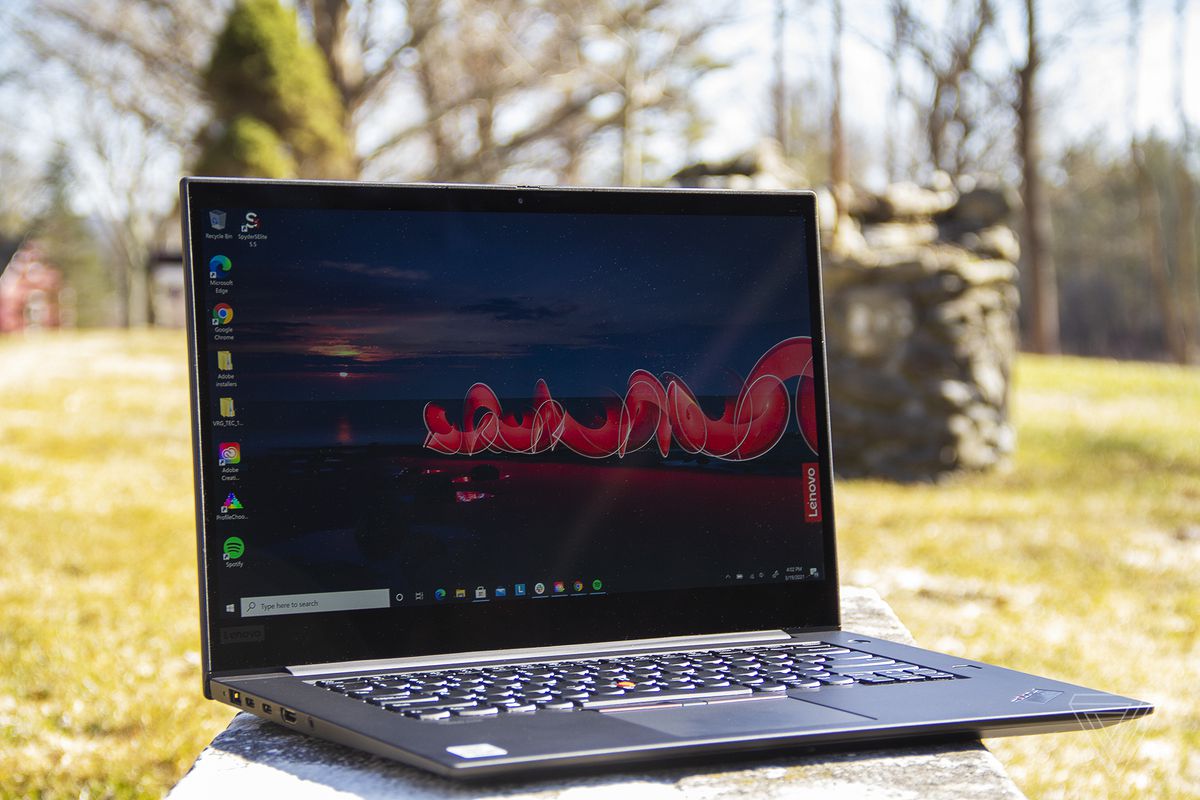 The chassis has a black finish with a nice texture. The ThinkPad logo on the right palm rest and the X1 logo on the top cover add splashes of red. The lid has a unique carbon-fiber weave pattern, which looks and feels similar to the carbon-fiber palm rests on the Dell XPS 15. (This is only available on UHD models). Lenovo says this material is lighter and more durable than aluminum and other common chassis materials. It’s also likely part of the reason for the X1 Extreme’s lofty price tag. 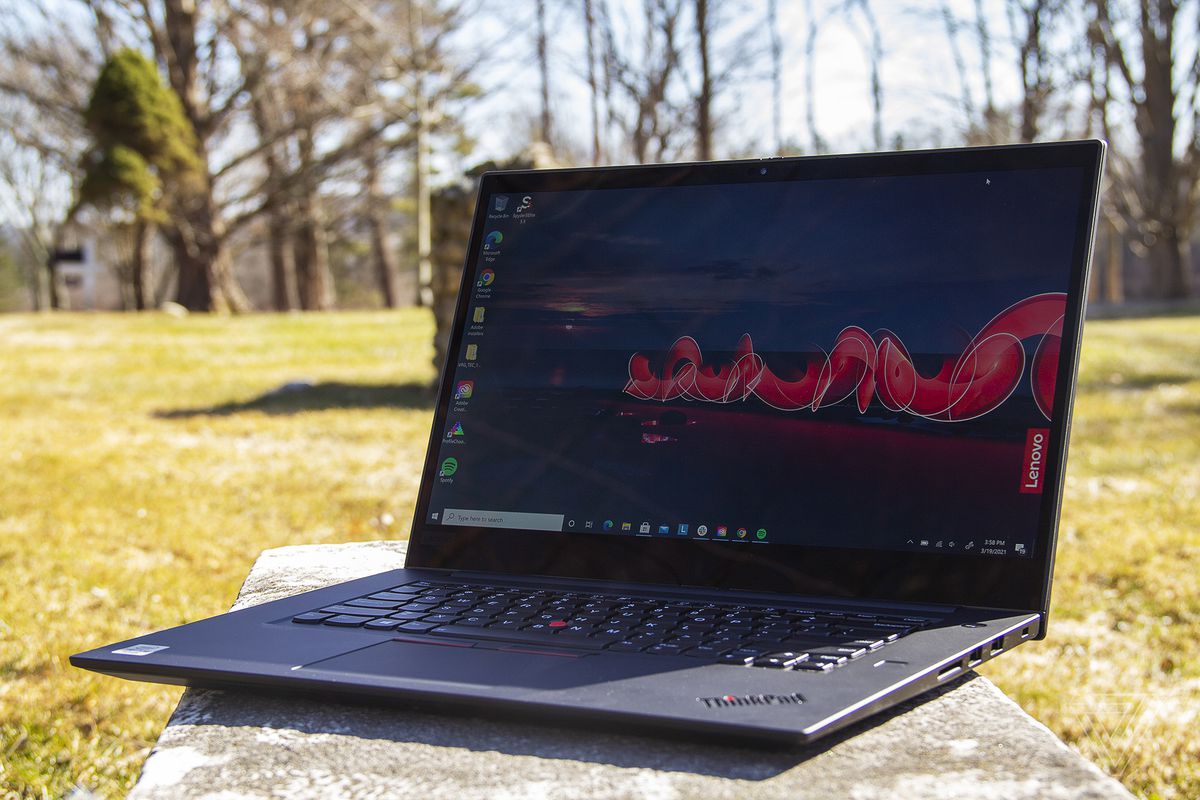 There are dual far-field microphones that work alongside Cortana.

One note on the build: the lid and chassis aren’t the worst fingerprint magnets I’ve ever seen, but they do pick them up. After a few days of use, the keyboard deck was pretty smudgy.

Finally, the X1 Extreme comes with some helpful features for remote meetings. You can optimize the dual microphones for various settings (including voice recognition, solo calls, and conference calls) in Lenovo’s Vantage software. They didn’t have any trouble picking up my voice. And the stereo speakers are fine, delivering distortion-free audio with percussion and bass that are audible but not exceptional. You can create custom equalizer profiles in the preloaded Dolby Access software, and you can also toggle presets for scenarios like voice, music, movies, and games.

The infrared webcam was also a pleasant surprise — while a bit grainy, it was fairly color-accurate and delivered a decent picture in low-light environments. There’s a physical privacy shutter that’s easy to click back and forth. You can sign into the X1 Extreme with Windows Hello facial recognition, as well as a match-on-sensor fingerprint reader on the side of the keyboard deck, which was quick to set up and didn’t usually have trouble recognizing me.

The Core i7-10850H isn’t the most monstrous processor around, especially compared to AMD’s recent H-series chips. But it does bring the business-specific benefits of Intel’s vPro platform, and it did a fine job with my piles of spreadsheets, emails, Slacking, and other general office work.

Similarly, the GTX 1650 Ti Max-Q is a midrange graphics card — it’s not what you’d want to use for serious gaming or high-throughput professional video editing. But for amateur creators and other artists, it can certainly lend a hand.

My test model scored a 386 on PugetBench for Premiere Pro, which tests its proficiency in real-world Premiere Pro tasks. That’s not a shameful score among top competitors, but it’s not great either. The system comes in under scores we’ve seen from the Dell XPS 15 with the same GPU, and the six-core MacBook Pro, which has AMD Radeon Pro 5300M. And, of course, it loses out to creator machines with more powerful Nvidia chips, such as the lower-priced Gigabyte Aero 15 with an RTX 3060.

If you’re going to be doing intense content work, prepare to hear the fans. Even when I was just bouncing around in Chrome, they were audible quite often. On the plus side, they did their job: the laptop’s bottom, keyboard, touchpad, palm rests, and hinge all remained cold. 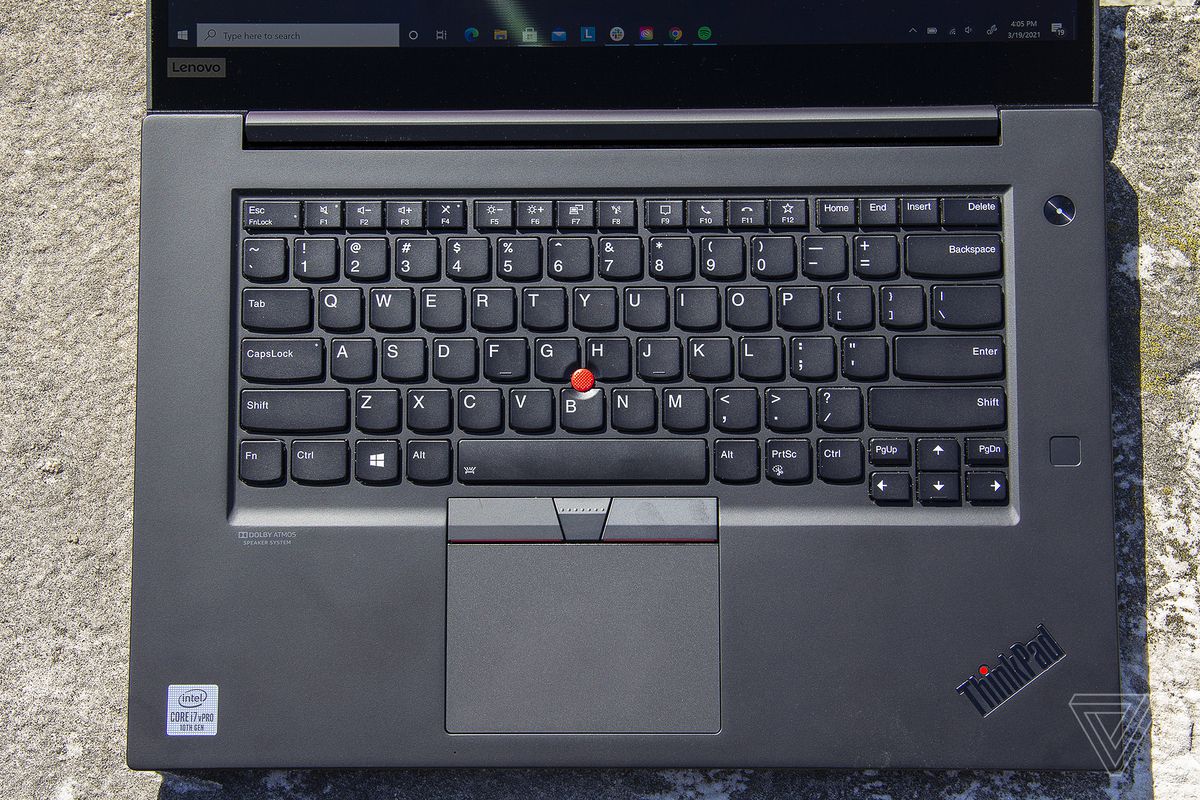 Lenovo says the ThinkPad can charge up to 80 percent in 60 minutes with its “Rapid Charge” feature.

Another compromise you’re making here is battery life. I only averaged four hours and 59 minutes on our battery test, which involved using the ThinkPad for continuous office multitasking on the Battery Saver profile, with the screen around 200 nits of brightness. I ran a trial without using Chrome to see if that would make a difference; it didn’t. And this result actually seems to be a bit on the high side — Tom’s Hardware got an even pithier two hours and 19 minutes on a synthetic streaming benchmark.

It’s not unexpected that a machine with a 4K screen and a discrete GPU wouldn’t last all day. But I got more juice out of the Gigabyte Aero 15, which has both an OLED display and a heftier graphics card. And if you don’t need the high-resolution screen (which many people won’t), the Dell XPS 15 (which still has an exceptional display) lasted an hour longer with my workflow, while my colleague Dieter Bohn got up to eight hours out of the MacBook Pro. Folks who are interested in the X1 Extreme who would prefer not to have it plugged in all the time should consider an FHD (1080p) model. 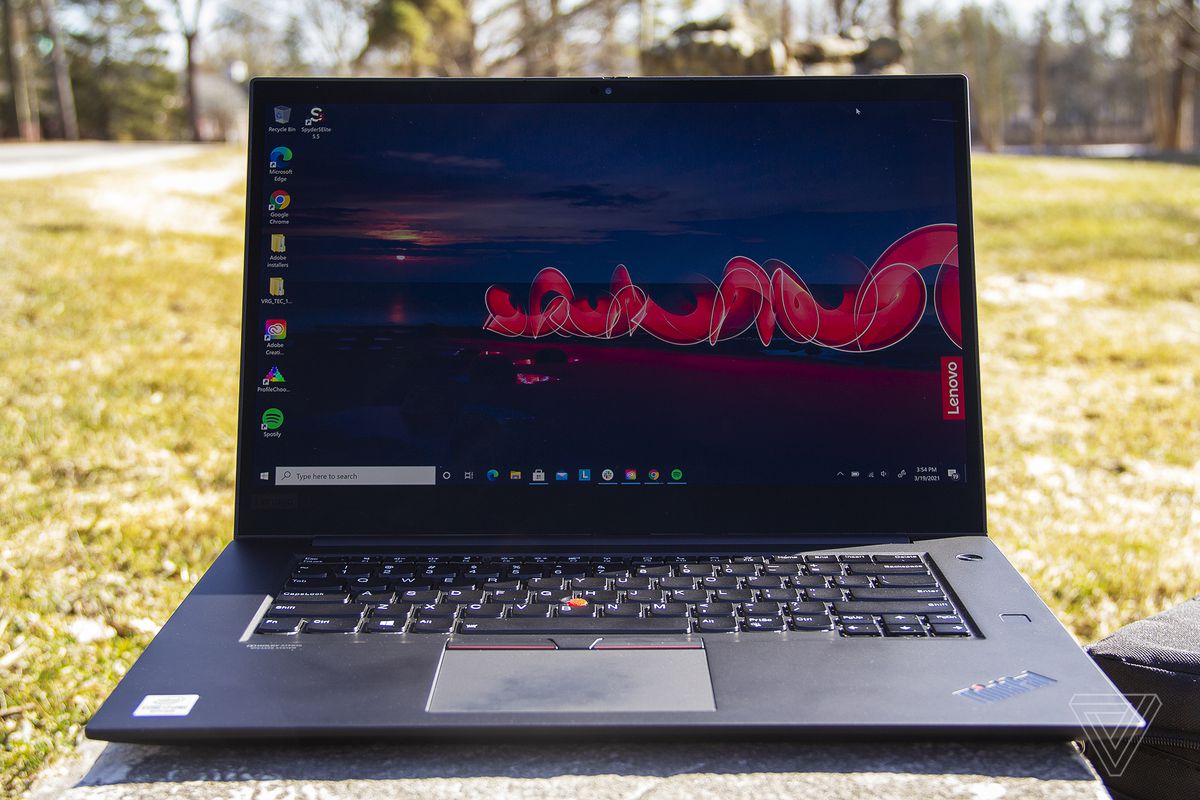 It’s a ThinkPad through and through.

Ultimately, the decision between the ThinkPad X1 Extreme Gen 3 and other 15-inch thin-and-light workstations really boils down to: do you want a ThinkPad?

This is to say that the X1 Extreme shares many of the strengths and weaknesses of Windows machines like the XPS 15. Both have dazzling displays, decent chips, sturdy build, boisterous fans, and mediocre battery life. Both have best-in-class keyboards and touchpads, with average webcams and speakers.

But a ThinkPad and an XPS are still very different machines — and if you’ve used any member of either lineup before, you probably know which one you prefer. They have different looks and different feels. The ThinkPad is slightly lighter and slightly thicker, with more ports and larger bezels. The XPS is a bit more powerful, but the ThinkPad has extra business features.

The XPS, due to its lower price, is a more accessible model for most consumers. And the X1 Extreme’s weaker chips and poor battery life, in particular, are tough pills to swallow at such a high price. But there’s still a market for the X1 Extreme — and if you’re willing to sacrifice a bit of power, a bit of money, and a bit of battery life for the unique advantages of a ThinkPad, you probably fall into it.

Photography by Monica Chin / The Verge

Will there be “Orange Is The New Black season 8”? Find out all the details...

Minari review – A moving portrayal of the pains of assimilation