The Bank of England has revealed the design for the UK’s new £50 note featuring computer scientist and codebreaker Alan Turing. Turing was selected to appear on the note in July 2019 in recognition of his groundbreaking work in mathematics and computer science, as well as his role in cracking the Enigma code used by Germany in World War II.

The polymer note will enter circulation from June 23 this year, and incorporates a number of designs linked to Turing’s life and legacy. These include technical drawings for the bombe, a decryption device used during WWII; a string of ticker tape with Turing’s birthday rendered in binary (23 June 1912); a green and gold security foil resembling a microchip; and a table and mathematical formulae taken from one of Turing’s most famous papers.

As well as honoring his scientific achievements, Turing was also selected to appear on the bank note in recognition of his persecution by the UK government for homosexuality. Turing was openly gay among friends, but in 1952 was arrested and charged with “gross indecency” for homosexual acts, which were illegal in England and Wales until 1967. Despite changes to the law, prosecution of same-sex acts continued in the UK for decades afterwards.

Turing did not deny the charges and was convicted and sentenced to chemical castration. He wrote in a letter before he was charged: “No doubt I shall emerge from it all a different man, but quite who I’ve not found out.” He died two years later at the age of 41 after eating an apple laced with cyanide. Historians still disagree over whether this was suicide or a case of accidental poisoning.

Turing’s birthday (23 June 1912) is rendered in binary on ticker tape, a format Turing thought could be used to enter data into machines. 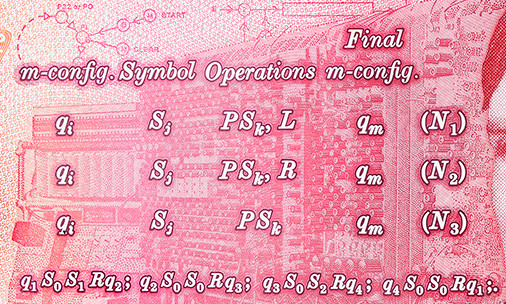 The table and mathematical formulae come from Turing’s seminal 1936 paper “On Computable Numbers, with an application to the Entscheidungsproblem,” which introduced the concept of the Turing Machine.

Turing’s signature is taken from the visitor’s book at Bletchley Park, and the quote from an interview given to The Times on 11 June 1949: “This is only a foretaste of what is to come, and only the shadow of what is going to be.” 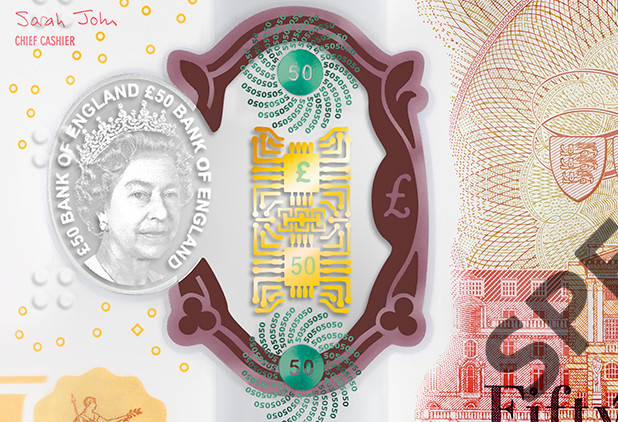 The note’s traditional security foil has been altered to resemble the design of a microchip, while the spiral sunflower patterns pay homage to Turing’s work in morphogenetics. 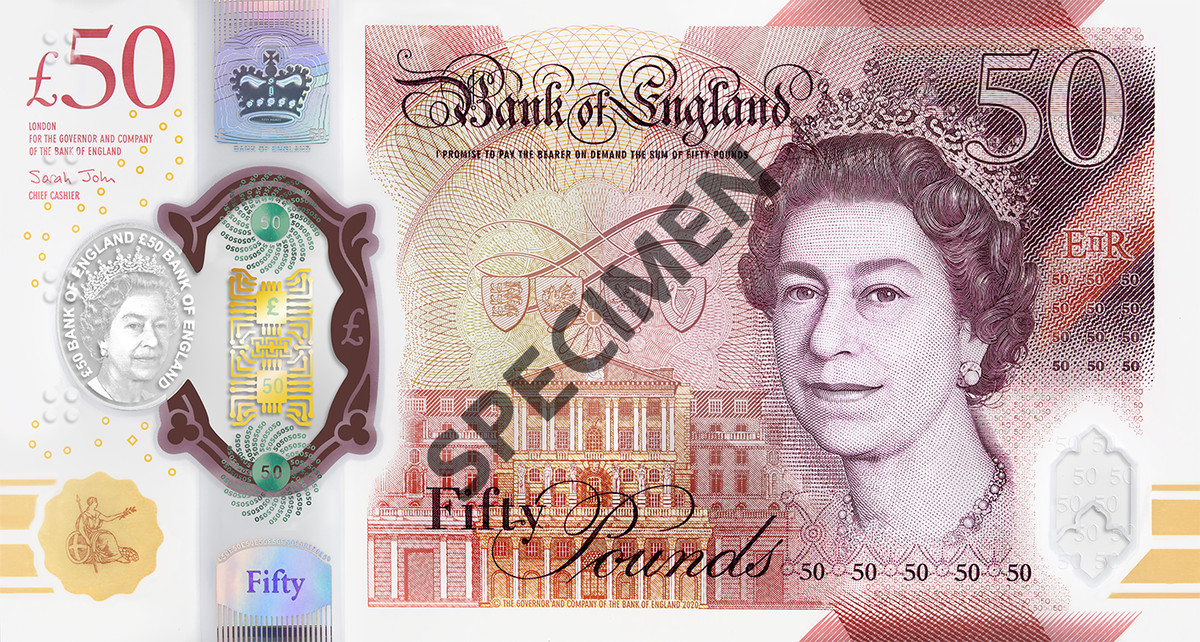 The rear of the note features standard elements for UK bank notes, including a portrait of Queen Elizabeth II.

Turing and tens of thousands of other men convicted of the same offenses were posthumously pardoned from 2017 following a 10-year campaign led by former MP John Leech. Leech said the treatment of Turing was a “national embarrassment and an example of society at its absolute worst,” and that selecting him to appear on the £50 note would at least bring his life and works to public attention.

“It is almost impossible to put into words the difference that Alan Turing made to society, but perhaps the most poignant example is that his work is estimated to have shortened the war by four years and saved 21 million lives,” said Leech in 2018. “Placing Turing on the £50 note would at least go some way to acknowledging his unprecedented contribution to society and science. But more importantly it will serve as a stark and frankly painful reminder of what we lost in Turing and what we will lose again if we ever allow that kind of hateful ideology to win.”

In an interview with BBC News, Turing’s nephew Sir Dermot Turing said that there was still much work to be done to truly honor Turing’s legacy. “I think Alan Turing would have wanted us to think about things like under-representation of women in science subjects; under-representation of Black and ethnic minority kids in STEM subjects in school, and why they’re not being given the opportunities they should have and why that’s bad for all of us.”

‘The Dragon Prince Season 4’: Release Date, Cast, Story and Trailer. Everything else you need...

What Kevin Hart Learned From His ‘Eye-Opening’ Car Accident