Cristiano Ronaldo scored the second-fastest hat-trick of his career, beaten only by the 20-minute treble he scored for Real Madrid against Espanyol in September 2015

Pele congratulated Cristiano Ronaldo after the Portugal forward’s hat-trick against Cagliari took him past the Brazilian legend’s tally of goals scored in official matches.

Ronaldo netted three times inside the opening 32 minutes to take his career total to 770 – three clear of Pele’s tally of 767.

“Life is a solo flight. Each makes his own journey. And what a beautiful journey you are having. I admire you a lot, I love watching you play and this is no secret to anyone. Congratulations on breaking my record of goals in official matches,” Pele posted on Instagramexternal-link.

Some reports suggest this is a world record tally but that is disputed by the Czech Football Association, which claims former Austria and Czechoslovakia striker Josef Bican is football’s true all-time top scorer with 821 goals.

Meanwhile, data from Rec.Sport.Soccer Statistics Foundation (RSSSF) says Bican scored 805 career goals. But among them were 27 goals for Rapid Vienna’s reserve and amateur teams, as well as strikes which were not in official international games. Remove those and Bican finished his career on 759 goals – short of Pele and Ronaldo’s total.

‘My ever-lasting and unconditional admiration for Pele’ 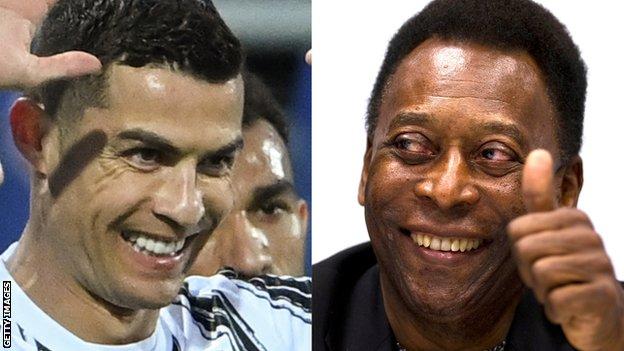 After the game against Cagliari, Ronaldo explained on Instagramexternal-link why he is only now acknowledging the “record”.

“The last few weeks were filled with news and stats considering me the world’s top scorer in football history, overcoming Pele’s 757 official goals,” he said. “Although I’m thankful for that recognition, now it’s time for me to explain why I didn’t acknowledge that record until this moment.

“My ever-lasting and unconditional admiration for mister Edson Arantes do Nascimento [Pele], such as the respect that I have for mid-20th century football, led me to take into account his 767 score, assuming his nine goals for Sao Paulo State Team, as well as his single goal for the Brazilian Military Team, as official goals. The world has changed since then and football has changed as well, but this doesn’t mean that we can just erase history according to our interests.

“Today, as I reach the 770th official goal in my professional career, my first words go straight to Pele. There’s no player in the world who hasn’t been raised listening to stories about his games, his goals and his achievements, and I’m no exception. And for that reason, I’m filled with joy and pride as I acknowledge the goal that puts me on top of the world’s goalscoring list, overcoming Pele’s record, something that I could never have dreamed of while growing up as a child from Madeira.”

Ronaldo came in for some criticism after Juventus’ Champions League defeat against Porto on Tuesday, the second year in a row they have been knocked out at the last-16 stage. But this performance was a reminder of just how devastating the former Manchester United forward can be.

He rose unmarked to meet Juan Cuadrado’s corner to send a towering header beyond Alessio Cragno after just 10 minutes, before drawing a foul from the goalkeeper for a penalty which he converted 15 minutes later.

The third goal was vintage Ronaldo, collecting Federico Chiesa’s pass just inside the area, shimmying away from a defender and powering the ball into the top corner with his left foot to complete the ‘perfect’ hat-trick.

Cagliari, who are just two points clear of the relegation zone, improved in the second half and got on the scoresheet when Giovanni Simeone slid home Gabriele Zappa’s cross from the right.

Ronaldo could have scored his fourth goal with virtually the last kick of the game, but Cragno did well to rush out and block.

Juventus stay third despite the win but are now three points clear of fourth-placed Atalanta and just one point behind AC Milan, who were beaten 1-0 at home to Napoli.