Calling the 2021 Motorola Moto G Stylus the best budget stylus phone feels a bit like a backhanded compliment. There’s more or less just one other contender for that title, the LG Stylo 6, which is too underpowered to recommend. But the G Stylus doesn’t just win by default; it’s actually a well-rounded and capable phone for under $300.

It offers a big 6.8-inch 1080p screen, a generous 128GB of built-in storage, and a Snapdragon 678 processor with 4GB of RAM. Motorola introduced it earlier this year with a $299 MSRP, though it’s now selling for $279 from the manufacturer and other retailers.

Other highlights include a 48-megapixel main camera accompanied by ultrawide and macro rear cameras, a 4,000mAh battery, a “water-repellant” design, and a fingerprint sensor embedded in the recessed power button. It’s a well-rounded set of features for a budget device, even without considering the G Stylus’ headline feature. 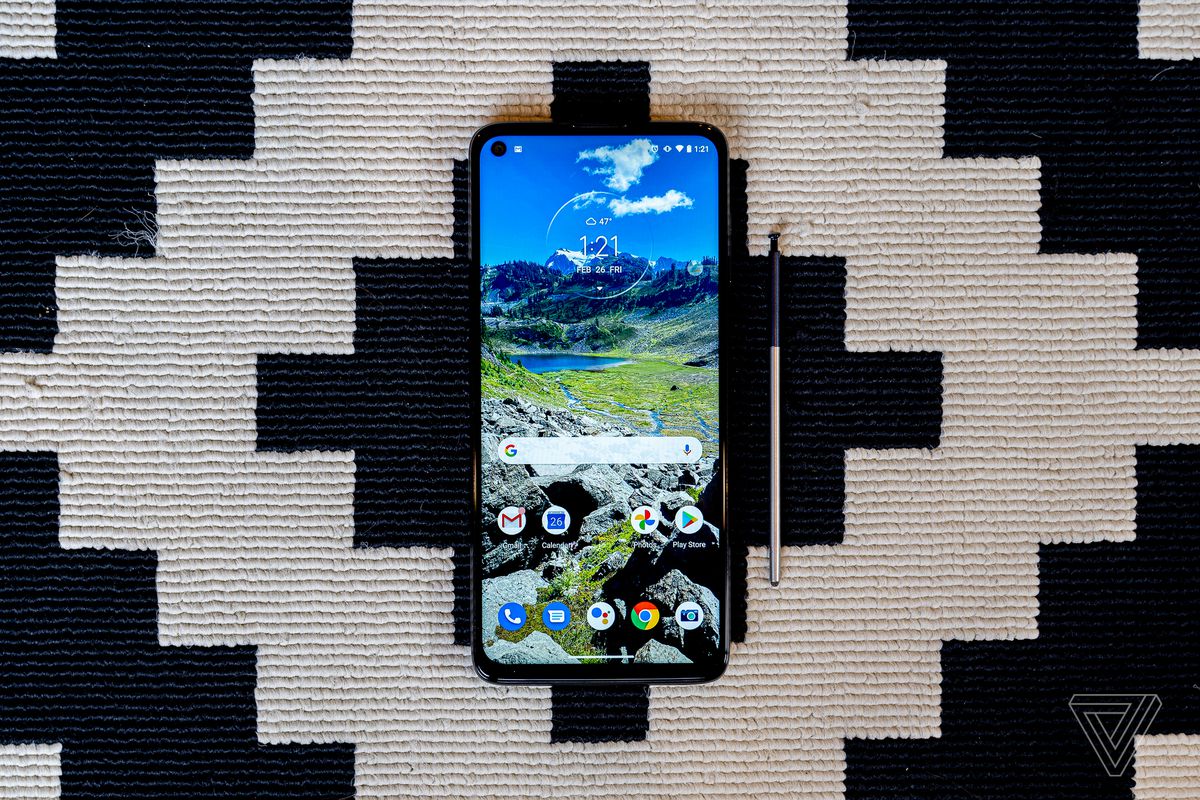 The G Stylus includes apps for note-taking, doodling, and coloring.

The main selling point is definitely the G Stylus’ stylus, so let’s cover that first. Like the Stylo 6, the G Stylus includes a built-in capacitive stylus tucked into the bottom-right corner of the device. Popping it out brings up a quick menu of shortcuts to stylus-friendly apps.

There’s a note-taking app and a shortcut to take and annotate a screenshot. You can also jot down a quick note without unlocking the screen. It’s a basic set of features — nothing too advanced like what the Galaxy Note series offers — but with a couple of neat bonuses. 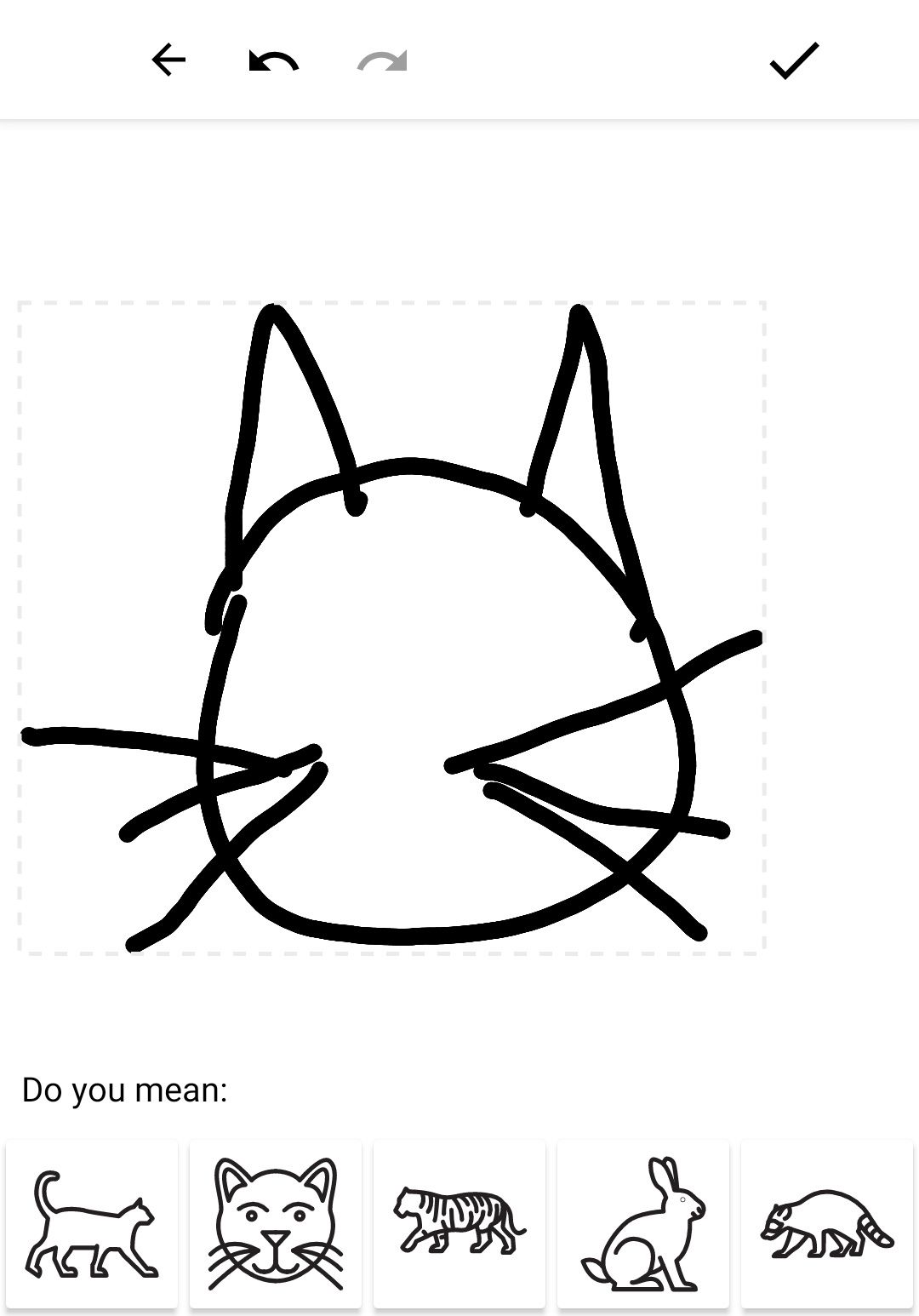 With AI, the phone can recognize what you’re trying to draw and turn it into a coloring book template.

First, messaging apps support handwriting-to-text conversion. This is a Gboard setting you can enable on any Android device, but it’s available by default on the G Stylus. Pressing the “globe” icon to the left of the spacebar opens up the handwriting panel. Write your message, and watch it appear in the text line above.

The Moto G Stylus’ other trick is the ability to create cinemagraphs, still images with a moving element. To create one, you’ll basically take a short video clip, holding the camera still. Then you use the stylus to draw on the areas of the scene with motion. The rest will remain frozen as a still image. You don’t necessarily need a stylus for this, but the added precision is helpful. Results can be saved as an MP4 or a GIF. The app does a decent job of stabilizing a handheld image for a more convincing final product, though the resulting clip is fairly low-res. Still, it’s fun to play with.

While the LG Stylo 6’s stylus features felt a little more fun and creativity-focused, the Moto G is a little more no-nonsense. Sure, there’s a coloring book app that does a neat trick of using AI to identify a rudimentary sketch of a cat and turn it into a template for your digital “crayons.” But where’s the animated GIF creator? Or an app that records as you sketch so you can text your friends and show off your mad doodling skills? These things exist in third-party apps, no doubt. But the native feature set feels, for better or worse, a little more grown-up. 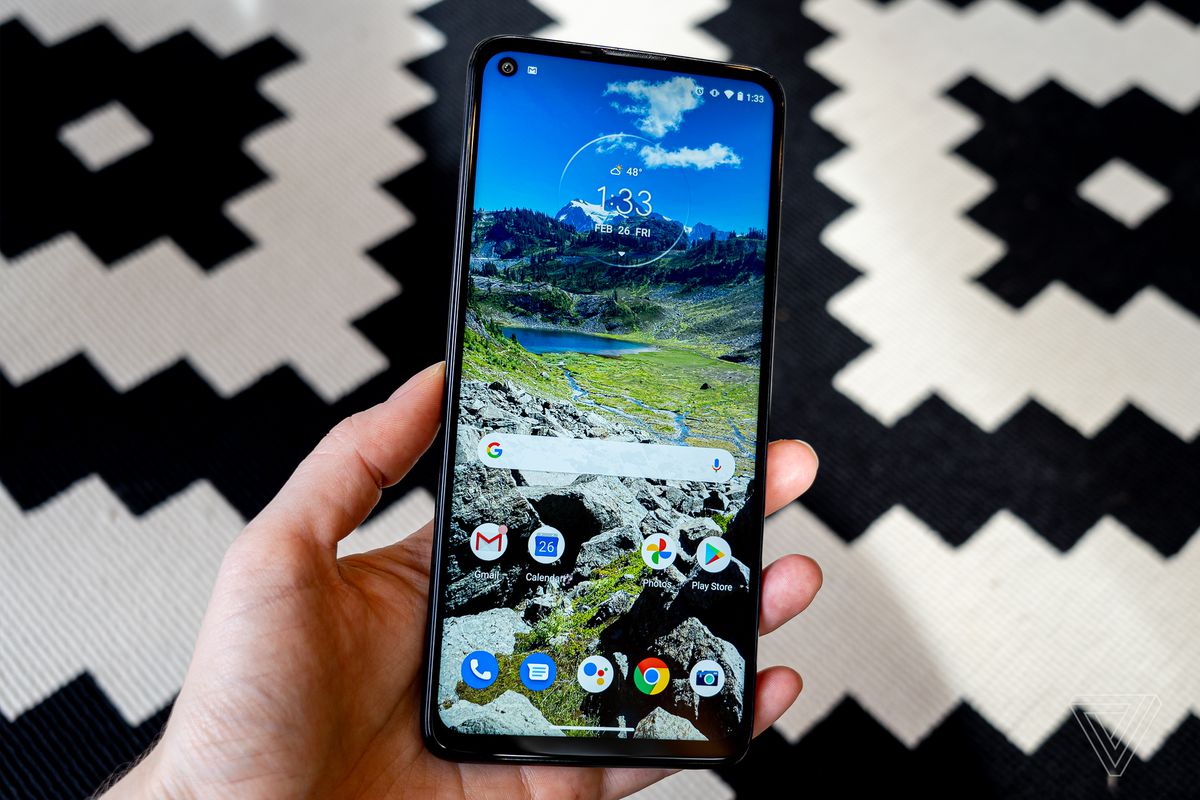 The Stylus’ screen is nothing fancy — standard 60Hz refresh rate LCD — but it’s a decently bright and large 6.8-inch 1080p display. The phone itself is, naturally, also large and on the heavier side, but the slightly rounded edges of its back panel make it more comfortable to hold than its dimensions suggest. It looks a little ridiculous peeking out of the top of a yoga pants pocket, but this stylus-packing device was never meant to be ultra pocketable.

The G Stylus uses a Snapdragon 678 processor with 4GB of RAM, and this combination feels more than adequate for day-to-day tasks. Apps load quickly, and jumping between them feels snappy. There are some occasional hiccups and slight slowdowns when scrolling through media-rich apps like Twitter, but nothing that feels too frustrating.

Battery life is also good — not outstanding but thoroughly sufficient. Motorola claims the Stylus will get two days to a single charge, which feels like a little bit of a stretch in my experience. More importantly, I had no problem getting through a full day, including two-plus hours of screen time, with plenty of battery life left to spare. Motorola includes a 10W charger, which it calls “Turbo Power” when it’s connected. Charging speeds are more average than “Turbo”: 10 minutes of charge got me an extra 10 percent, and it took about 40 minutes total to bring an 80 percent battery up to full charge.

The Moto G Stylus ships with Android 10 and is expected to get an update to Android 11. Motorola doesn’t say exactly when, but G Stylus owners can keep an eye on the company’s software update page for more information. Motorola’s budget device support isn’t great; the phone will get just two years of security updates, ending in January 2023. Samsung recently announced that even its budget A-series Galaxy phones will now be guaranteed four years of security updates. Hopefully, that’s a policy more manufacturers like Motorola will consider adopting. 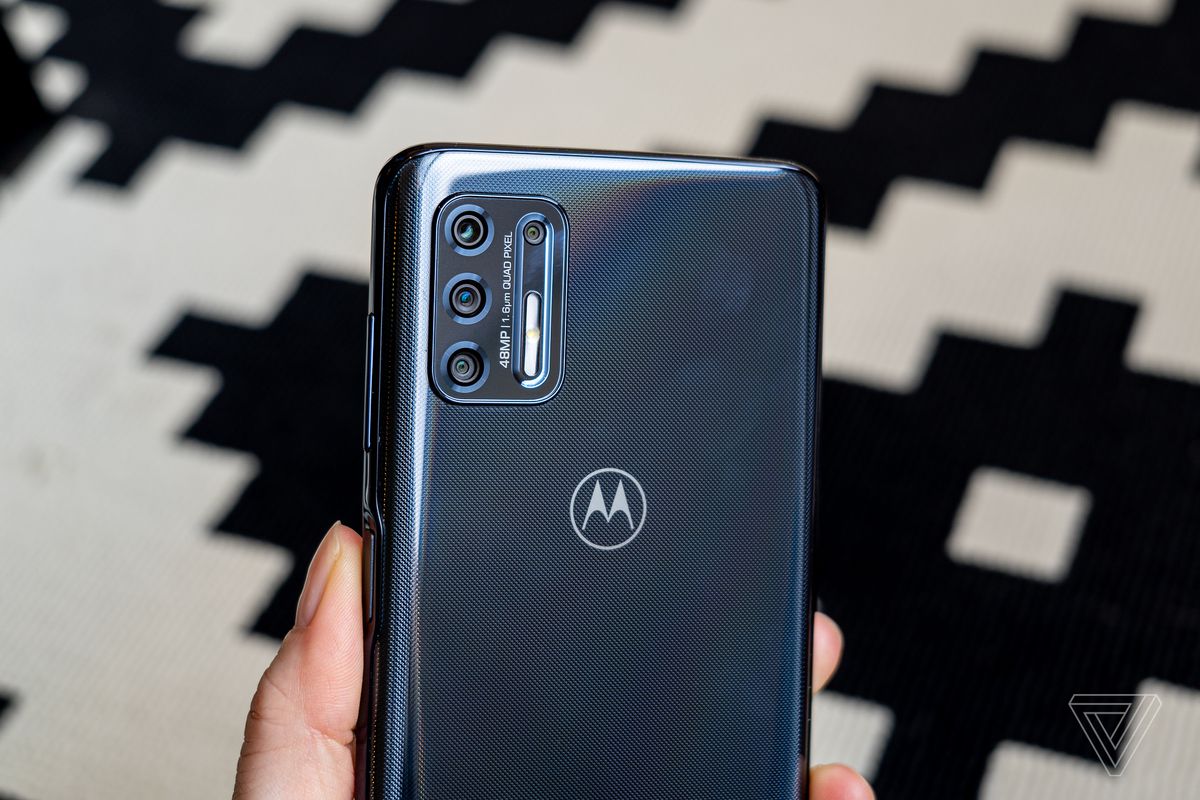 The triple camera on the G Stylus is the same found on the $400-ish Motorola One 5G Ace, with the addition of a dedicated depth sensor. To recap, that includes a 48-megapixel f/1.7 main camera that produces 12-megapixel images, an 8-megapixel f/2.2 ultrawide, and a 2-megapixel macro camera.

There are no surprises here. Like the Ace, the G Stylus is capable of good-quality images in bright light, particularly from the main camera. Downsampling from 48 megapixels to 12 allows it to capture plenty of detail, but if you look close, you’ll see some crunchy-looking sharpening. Colors are reproduced well, without looking overly saturated. As an exception, the camera seems to boost saturation and warmth when it identifies a subject as food. The results are more appetizing, if a little unnatural.

Unfortunately, the ultrawide camera is less good. Even photos taken in bright light show smeary details and some ugly noise. A photo I took of a city street has an unusual purple tint, while a photo from the main camera in the same spot looks much better. This is all evident even at smaller image sizes for social sharing, which is unfortunate. The macro camera is bad, but the selfie camera is a little sharper and better than expected from a budget phone. Win some, lose some.

While the camera system on the Ace was a bit of a letdown, it feels about right on the less expensive Moto G Stylus. You won’t find an amazing night mode or top-notch picture quality here, but for a sub-$300 phone, it does the job just fine. 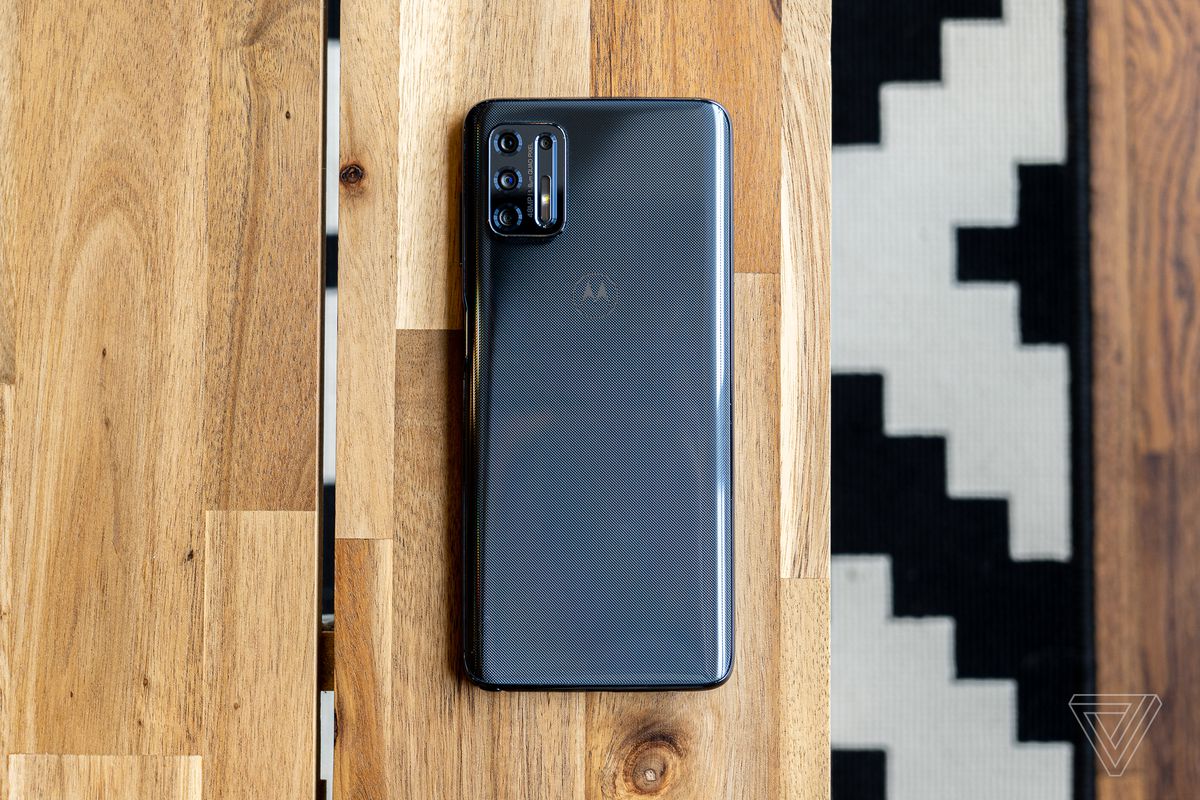 The G Stylus is a well-rounded budget device, even if you don’t care about its pen-focused features.

The Moto G Stylus is a well-rounded budget phone that also happens to have a stylus. Of Motorola’s 2021 budget devices that I’ve tested so far, this one offers the best balance of features and cost-saving measures. It has a big display, stylus features, good battery life, and solid everyday performance. The cameras, though flawed, are good enough to get by.

This is the obvious choice for someone looking for a budget stylus phone, but I hesitate to recommend it to everyone else. The $299 OnePlus Nord N10 5G offers a faster refresh rate screen, a better camera, and slightly better performance for nearly the same price. If you can afford to spend a bit more, the $349 Google Pixel 4A will offer better software support and a great camera.

If you’re a stylus devotee or even just strongly stylus-curious, the Moto G Stylus is a good choice. But if you’re ambivalent toward the stylus, you might be better off with one of these other options.

Photography by Allison Johnson / The Verge