Kyrgyzstan’s former president has been rearrested as the country’s incumbent leader tries to shore up his power after days of unrest over a disputed election.

He had been freed by supporters days earlier in protests against last Sunday’s contested parliamentary poll.

The election has triggered a political crisis in the Central Asian country.

On Saturday Kyrgyzstan’s parliament named nationalist politician Sadyr Zhaparov as new prime minister, after his predecessor stepped down, opening up a power vacuum.

Mr Zhaparov is also among the several prominent politicians who were freed this week during the protests. He had been serving a prison sentence on charges of taking a government official hostage in 2013.

The unrest began after demonstrators took to the streets of the capital Bishkek and stormed government buildings on Tuesday, demanding a new vote and the resignation of pro-Russian President Sooronbay Jeenbekov.

They said the election results had been rigged – claims international monitors said were “credible” and a cause for “serious concern”.

President Jeenbekov has said he will resign when a new government is formed and the rule of law is restored.

In the meantime, the president has declared a state of emergency, after demonstrations on Friday spiralled into violence and clashes with police. 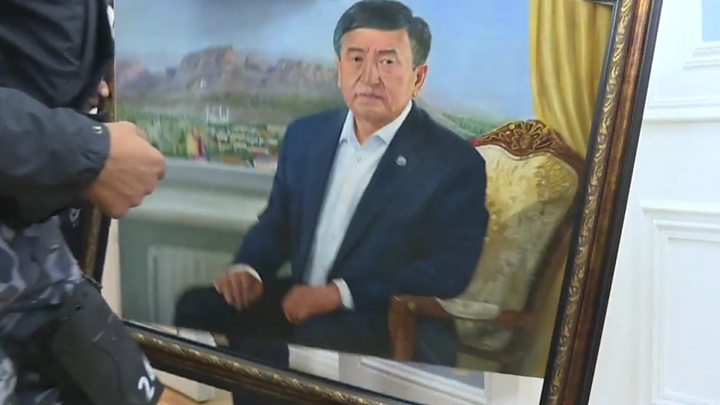 Fist fights broke out among groups supporting rival politicians who were vying to become the country’s new prime minister.

More than 1,200 people have been injured and one person has been killed in street clashes since protests erupted. Police have reportedly used water cannon, stun grenades and tear gas to disperse protesters.

Now, a curfew and strict military restrictions have been imposed, including controls on who can travel in and out of the capital.

The landlocked country, which borders China, was part of the Soviet Union until independence in 1991. It has a reputation for holding semi-free and fair elections in comparison with some of its neighbours, but uprisings in 2005 and 2010 swept previous presidents from power.

The latest political instability has concerned Kyrgyzstan ally Russia, which has played a role in mediating recent crises in other post-Soviet states, including Belarus.

How and why was Atambayev rearrested?

The state security service said it had detained Mr Atambayev on charges of inciting unrest. The ex-president is one of Mr Jeenbekov’s fiercest political enemies.

Mr Atambayev’s supporters had on Tuesday secured his release from prison where he was serving a lengthy sentence on corruption charges.

What caused the unrest and what do protesters want?

A disputed parliamentary election led to a violent uprising this week as protesters refused to accept the outcome. The Central Election Commission later annulled the results.

The clashes created a power vacuum and spread mob rule across the country, with people storming government offices and installing their own leaders.

In an extraordinary session of parliament on Saturday, Mr Boronov was replaced by Mr Zhaparov, who is backed by nationalists.

Seen as an ally of the president by opposition factions, Mr Zhaparov told MPs he would keep the cabinet line-up unchanged.

It is not clear whether this appointment will satisfy demonstrators, who cannot agree on who should lead the new government. Each group wants their own leader to take power.

Earlier, President Jeenbekov sacked top security officials who supported the opposition or failed to intervene when it was seizing power.

What do we know about the election?

The parliamentary vote was held last Sunday. Only four political parties out of 16 won enough votes to gain seats in parliament – three of the four had close ties to Mr Jeenbekov.

None of the established opposition parties secured a seat, and on Monday all 12 opposition groups jointly declared they would not recognise the results.

They accused parties close to the president of vote-buying and voter intimidation. Some observers claimed to have seen, during the first hours of voting, some citizens with marked masks being handed filled-out ballots.

There were also allegations of voters being bribed and bussed in to places where they could swing the result.

Is LG Wing’s Unique Design Good Enough to Help It Succeed in India?

Haunting of Hill House Season 2: When is it coming on Netflix? & Everything you...