It’s been a rocky few years for multiplayer Star Wars games. In 2015, EA revived the Battlefront franchise only to deliver a beautiful but shallow arcade experience that didn’t require much skill. This was then followed up by an improved and expanded sequel, which only reached its full potential years after it was nearly immobilized by an industry-shaking microtransaction controversy.

Despite this, Battlefront II turned out to be one of my favorite Star Wars games. It received a batch of updates that I believe made up for its rocky start and kept me coming back. These updates were mainly focused on ground combat modes, leaving Starfighter Assault, its space battle mode, to go without an update since launch. While it was a fun mode, it largely relied on its spectacle and speed over engaging gameplay. It was fast, fun, and dumb.

Star Wars: Squadrons, EA’s new combat flight sim, slows down the pace and replaces the mindless one-button abilities with intricate systems that require moment-to-moment decisions and long-term planning. The ability to manipulate these systems, like power distribution and shield allocation, can separate the good pilots from the great.

Squadrons lowers the player count to 10, split between the New Republic and the Galactic Empire. Both sides allow players to select from four classes: the all-around fighter, the dedicated bomber, a speedy interceptor, or a team-focused support ship. Rebel ships come equipped with shields and generally have great visibility, which comes in handy in VR. Imperial ships, with the exception of the TIE Reaper, trade shields for the ability to immediately transfer power from one system to another, providing a complete laser recharge or full boost refill. They also have worse visibility, due to the classic TIE fighter cockpit design.

No two matches of ‘Squadrons’ are exactly the same

Within each faction, the classes all have a distinct feel. Some are more maneuverable, while others give and take more damage. Modifications to your ship’s components can bend one class to mimic the role of another. You could outfit your fighter to be more effective against capital ships, or you could tweak your bomber to be more effective against other starfighters.

These modifications always come with a trade-off, a theme that permeates throughout the rest of Squadrons. Every benefit has a drawback. In order to raise your top speed, you may need to sacrifice your overall health pool. This allows for a lot of personalization in your starfighters and really changes the way you play. Some loadouts may benefit from an aggressive mentality, requiring you to get in close and get out, while other kits allow you to move a bit slower and deal as much damage as you take. The variety of possibilities ensures that no two matches of Squadrons are exactly the same, and you have to be ready to adapt to any given situation. The starfighter with the steepest learning curve seems to be the support ships, which handle like big space boats and are a bit slower. 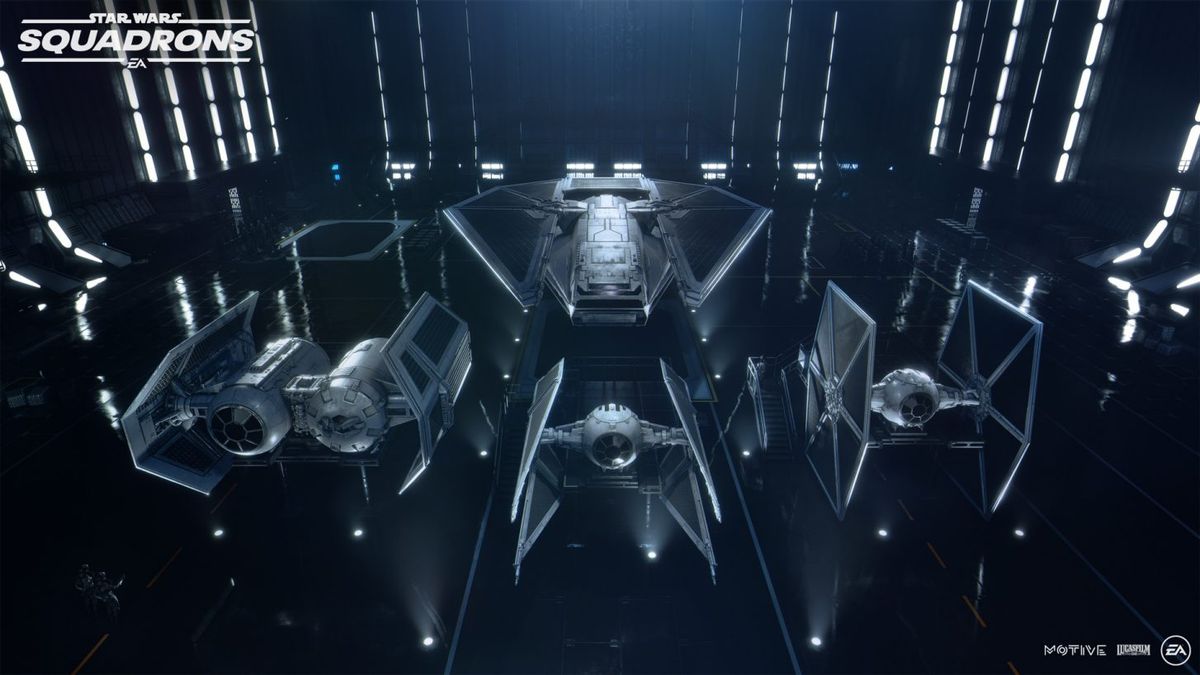 The two main multiplayer modes in Squadrons are dogfights, a short team deathmatch-type game mode, and fleet battles, a multistage objective-based mode focused on taking down the enemy’s flagship.

Fleet battles is the premier mode of Squadrons. Two teams go head to head with the ultimate goal of taking down the other’s capital ship. However, both teams must go through the other defensive line of fighters, corvettes, and frigates in order to make the final approach. Each side must work to boost their morale in order to push the frontline forward; each kill gives a morale boost, while each death takes some away.

There’s nothing like weaving through asteroids, dodging missiles, and laying mines for your pursuer to encounter

A fleet battle begins with an initial dogfight. This is where interceptors and fighters are handy. The winner gets a morale boost that propels them into the next phase, while the opposing team has to pull back and defend their frigates. These serve as defense structures and are extremely valuable. They keep the frontline away from your capital ship while also providing a resupply point during the attack phases. Losing one has real cost and can make attacking the enemy’s flagship much more challenging.

The constant push-and-pull nature of this mode makes it much more engaging than the linear hand-holding of Starfighter Assault in Battlefront II. I found myself clenching my controller as our Nebulon-Bs were on their last legs, swerving my bomber around, setting full power to my lasers to take down the incoming corvette. I feel like I have agency over a battle and can turn the tide of the battle based on how well I play my role. 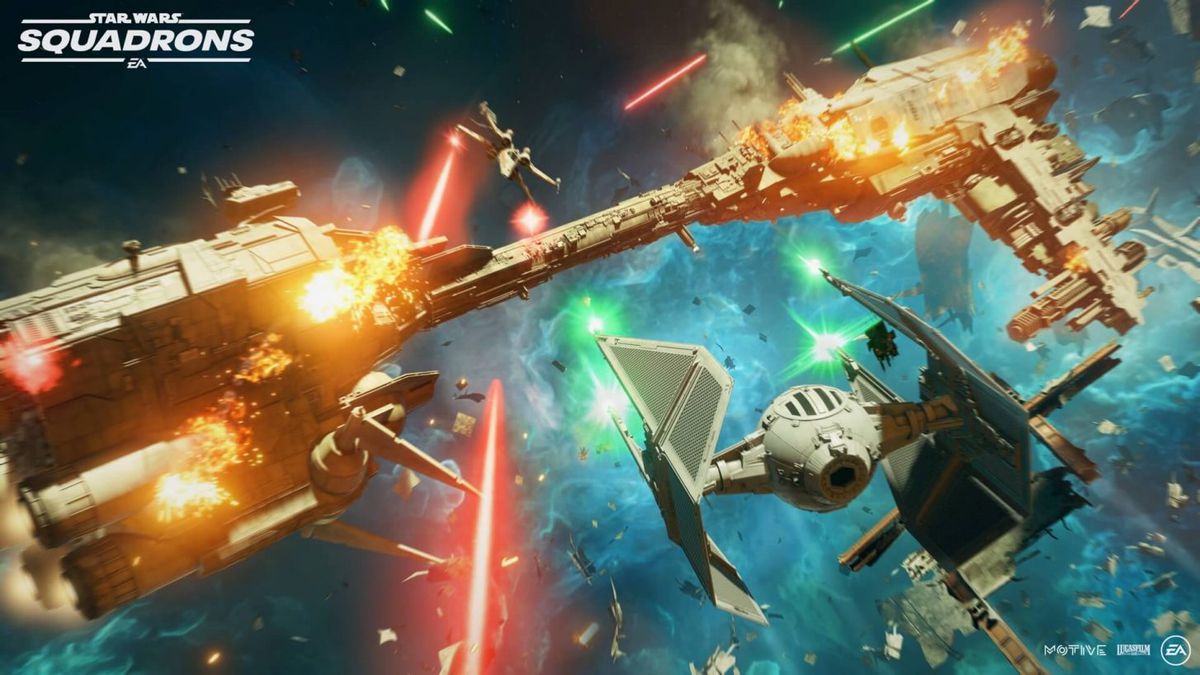 Both modes are played on the same six maps, with size variations for the two modes. They offer great variety, and most of them provide excellent cover. In one round as a U-Wing, I led my team around an asteroid just above a Star Destroyer, using the squadron mask ability to hide our bombers from their scanners, setting us up for a perfect bombing run on their shield generators. In another round, I placed a turret mine around the corner of a debris field, just in front of our frigate, providing covering fire that would hit enemy bombers in their blind spot. There’s nothing quite like weaving through asteroids, dodging missiles, and laying mines around the bend for your pursuer to encounter.

That’s at the heart of what could make this an exciting esport: the potential for clever plays and team tactics. But whether this game has the steam to stick around is yet to be seen. After nearly 60 hours, I can feel the charm of the maps wearing off. With no upcoming content announced, I’m not sure moving up the competitive ranks would be worth grinding on the same maps over and over.

Ranking has also been a bit of a hassle at launch. For one, if any player drops out of a game, your whole game immediately becomes invalid for ranking. You could leave the unranked match without impacting your competitive rank, but it would count as a loss on your pilot record. So you’re forced to play a whole match down one or more players or sacrifice your ratio hoping the next round is better. At this point, my ranking is completely bugged. As soon as I finished my qualifying rounds, my rank reset to zero and my end-of-round rank screen glitched, with XP counting up to infinity. These are understandable issues to have at launch, but it’s been a bit discouraging as someone eager to climb the ranks.

Squadrons is the Star Wars game I’ve been waiting for. It challenges players and makes them sink deeper into its mechanics to improve. It maintains the spectacle of the Battlefront games while relinquishing control over the action to the player, raising the stakes for each strategy and decision. The big question is whether this game will have a prolonged life, especially in esports. EA continues to say that it has no plans for future content, so the future of Squadrons may be in the hands of the fans. Some are already forming their own tournaments, like the Calrissian Cup and Operation Ace. They may be Squadrons’ only hope.

Brad Pitt’s Son Maddox Just Testified In Divorce Case With Angelina Jolie, And It Was...