The news of President Donald Trump’s positive coronavirus test, and his subsequent hospitalisation, has reminded the country that no one is protected from this virus.

So where is the US right now in dealing with the pandemic?

With about 7.5 million coronavirus cases, the US has the highest number of confirmed infections in the world – about one fifth of the global total despite having only 4% of the population.

After the initial spike in late March, social distancing restrictions across the country gradually brought infections to heel. By May, case numbers had stabilised. But as states peeled back lockdown measures, cases began to rise, reaching a countrywide high in July. 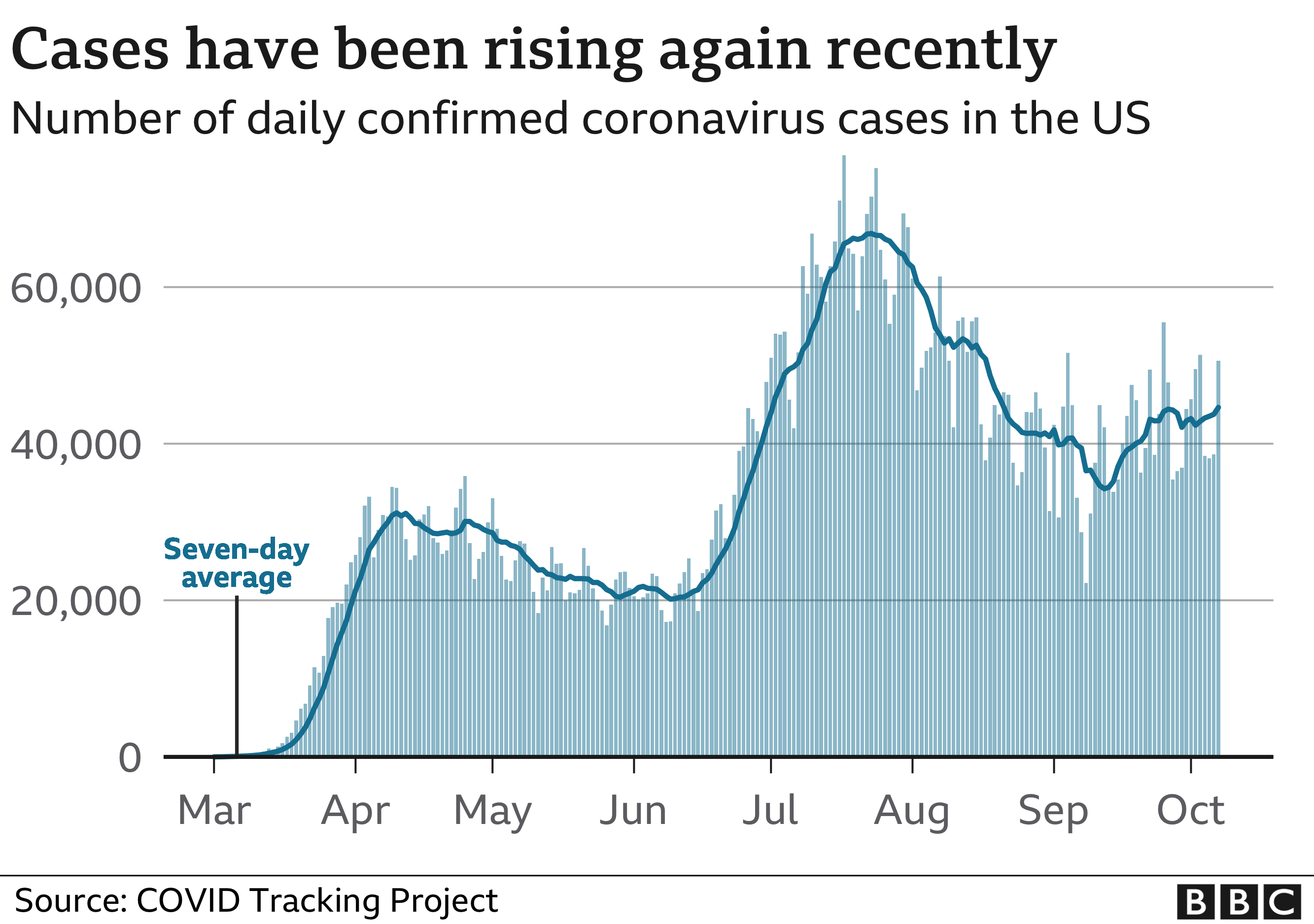 But as summer hotspots – like Arizona, Florida and California – brought their outbreaks under control, surges have developed elsewhere, with quick-moving outbreaks in North Dakota, South Dakota, and Wisconsin.

In recent weeks, the country has experienced yet another rise in infections, with national cases rising for three weeks in a row. Though numbers have so far not reached the record-breaking levels of July and August, the country is reporting more than 40,000 new cases each day.

Hospitalisations, too, are on the rise. According to data compiled by the Covid Tracking Project, the average number of people hospitalised for coronavirus in a week rose recently for the first time since July.

Why are cases rising?

It’s difficult to explain precisely why.

One contributing factor has been the return to school for US students.

A recent study from the US Centers for Disease Control on the almost 100,000 coronavirus cases reported between 2 August and 5 September – around when college students began their return to school – found that weekly cases among those aged 18-22 increased by 55% nationally.

The greatest increases came from the Northeast (which includes New York, Connecticut and New Jersey) and the Midwest, which is a region located west of the Northeast, including Illinois, Indiana, Ohio and Wisconsin.

There have now been more than 130,000 cases identified at more than 1,300 American colleges, according to reporting from the New York Times. 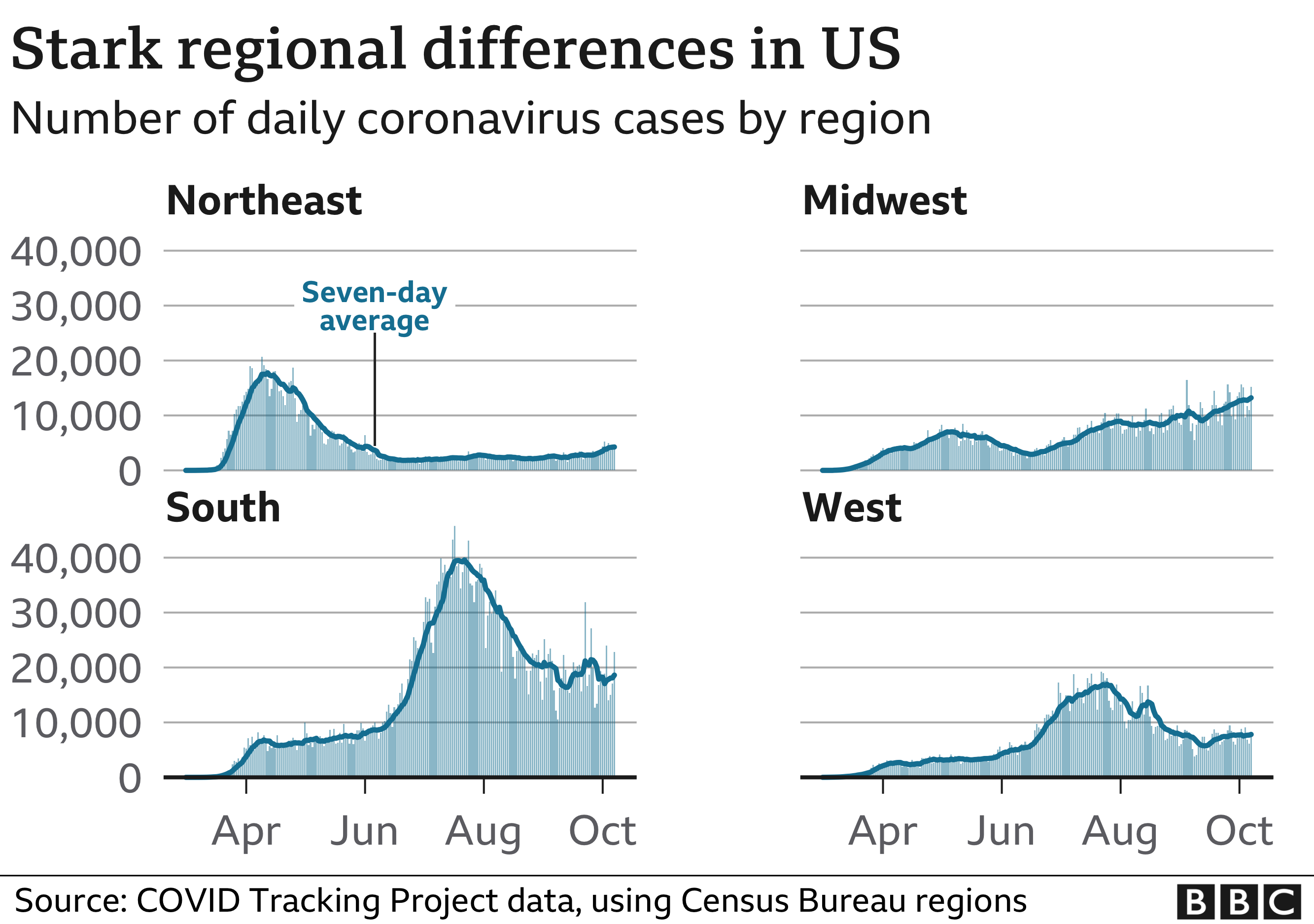 Another compounding factor is the change in seasons. Top US virus expert Dr Anthony Fauci said last month that we should plan to “hunker down” through the fall and winter. “It’s not going to be easy,” he said.

Why? A key piece of coronavirus health advice has been to do things outside. This gets more difficult as temperatures slip. Instead, cold weather will drive people indoors to closer quarters with potentially poor ventilation, where the risk of spread is heightened.

There are now additional fears that the virus will collide with the US influenza season – which typically begins in October – threatening to overwhelm the country’s health system.

Here’s some good news – virus deaths in the US are continuing to fall, albeit gradually.

As of early October, the daily average had reached around 720, a marked drop from the staggering 1,000-plus daily fatalities recorded this summer. 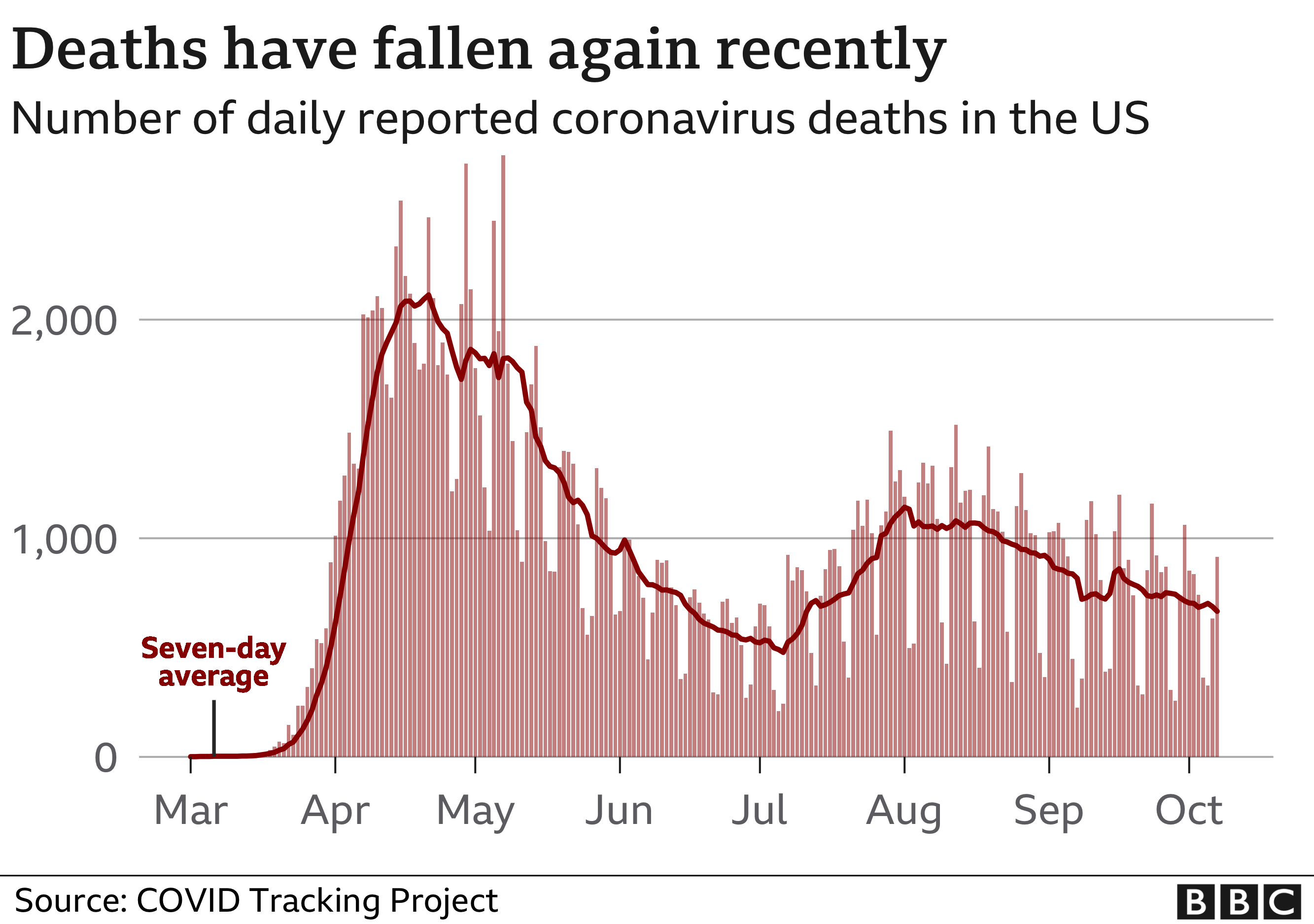 But the bad news? This decline appears to have slowed in recent weeks. And recent daily tallies suggest some ground has been lost since the record lows of early July.

In total, over 210,000 people have died of Covid-19 across the US, according to data from Johns Hopkins University.

What are the hotspots?

Case numbers remain high throughout much of the country, with concentrations in the Upper Midwest (that includes Wisconsin and Minnesota) and parts of the West.

Wisconsin is one of the state’s being hardest hit. Case numbers there have quadrupled in the past month according to the Covid Tracking Project. Hospitalisations more than doubled throughout the month of September, and its test positivity rate is now at a weekly average of 19.6%,

To put this figure into perspective: The World Health Organisation in May suggested a positive case rate at or below 5%, for two weeks, before reopening measures were implemented. North Dakota is also in the throes of a major outbreak. For the fourth week in a row, it lead the US in most cases per capita – at 548 cases per one million residents. Neighbouring South Dakota, as well as Montana, Utah and Idaho, are also recording severe upticks in new infections.

Sunbelt states Arizona, Florida and California – pummelled by the virus this summer – are now getting some relief, with steep declines.

New York City, once the epicentre of the US outbreak, is once again facing climbing case numbers. In late September, as many public schools began their reopening, Mayor Bill DeBlasio reported a daily positive test rate of 3.25% – the highest daily rate since June.

Mr Cuomo said there “could be” a future rollback of indoor and outdoor dining in hotspot areas, but described the closure of nonessential businesses in certain postal codes as “arbitrary and capricious”.

But despite the political tug-of-war, the city will go ahead with plans to shutter public and private school in those nine areas, home to about 500,000 New Yorkers, including large communities of Orthodox Jews, among whom the virus has been spreading rapidly.

“I’m not going to recommend or allow any New York City family to send their child to a school that I wouldn’t send my child,” Mr Cuomo said of the closures.

It’s interesting that these considerations are playing out in New York City even though it still has a lower positivity rate than many other parts of the country. Zack Snyder Throws Shade At Justice League Controversy While Praising Army Of The Dead As...

Upcoming Daveed Diggs Movies And TV: What’s Ahead For The Hamilton Star

How to Recharge Mobile From Paytm Phone App Through UPI