James Bond may have been the last straw for Regal and Cineworld, but analysts I spoke to agree: the only thing that will truly save movie theaters in the United States is a COVID-19 vaccine.

On Thursday, Regal Cinemas — the second-largest theater chain in the US with 536 theaters and 7,076 screens — will officially shut all its doors in the United States for the second time during the global pandemic. Its parent company Cineworld is closing 127 theaters in the UK as well. Over 45,000 people may lose their jobs or be furloughed, and there’s no timeline for reopening.

In what seems like good news, AMC and Cinemark, the first- and third-largest US chains respectively, will not be following Regal’s lead. Each confirmed today that over 80 percent of their US-based theaters are open and will stay open despite Regal’s decision.

But if you love the theaters, you shouldn’t necessarily take that as a reprieve — even with Regal out of the picture, AMC and Cinemark are fighting over pieces of a pie so small that both of them could still wind up starving. Financial records show AMC lost $2.7 billion in the first six months of 2020, and Cinemark lost $230 million.

“They’re in a state of no revenue”

That’s not surprising because revenue all but evaporated for each company when people stopped going to the theaters, dropping 98.7 percent for AMC and 99 percent for Cinemark compared to the previous summer, to just under $20 million and under $10 million, respectively — compared to the $65 million that Cinemark paid in rent. “They’re in a state of no revenue, and that’s about as dire a situation as you can imagine,” says Benchmark analyst Mike Hickey.

Each chain publicly said it can only hold out through part of 2021 unless things change — despite taking on hundreds of millions of dollars in debt this year, renegotiating rents with their landlords, laying off tens of thousands of employees, reducing salaries, and closing some small number of theaters permanently. 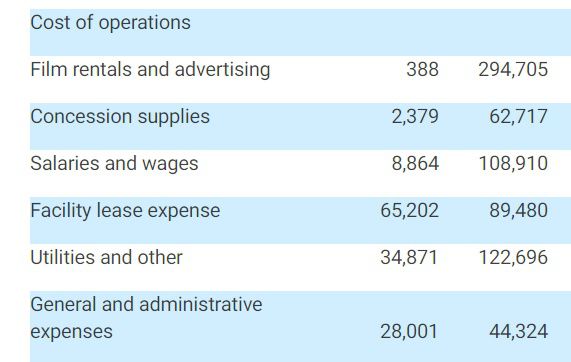 When the theaters are closed, many costs drop dramatically — but that’s still $65M worth of rent in Q2.Image: Cinemark

It’s largely a matter of rent, explains Wedbush Securities analyst Michael Pachter. The big chains largely don’t own their own buildings, so even if they stop screening movies, furlough their employees, and stop selling food — Cinemark had to throw out $2.4 million worth of perishable food last quarter — they’ve still got to pay rent, and there’s only a matter of time before landlords, many of whom need to pay their own mortgages, will come to collect. “If we don’t get some visibility to a vaccine soon, you wonder how long the landlords are going to be patient,” says Pachter.

And that’s just the remaining majors, which (along with Regal) accounted for only 53 percent of movie screens in the United States. On September 30th, the National Association of Theatre Owners warned Congress that “69 percent of small and mid-sized theater companies will be forced to file for bankruptcy” if things continue as they did in Q2. “A lot of them are small chains, mom and pop businesses, generational sometimes. I think a lot of them won’t be able to survive this,” Hickey says.

Now, things aren’t quite as bad now as they were in Q2, because those numbers are from when theaters were largely closed in the US. AMC and Cinemark only began reopening for real in August, ahead of the release of Christopher Nolan’s Tenet. Theaters had hoped Tenet would bring back crowds, and its director and owners had repeatedly insisted the film wouldn’t skip theaters and needed to be seen there.

‘Tenet’ was the test, and it didn’t make the grade

But Tenet opened at just $20 million over Labor Day weekend, a number that could only be generously viewed as “good” given the pandemic, and it didn’t even manage to cross $30 million by September 13th. It’s now passed $300 million in global box office receipts, but Exhibitor Relations analyst Jeff Bock tells us that might not nearly be good enough: with a budget of $205 million plus a huge marketing campaign, the film might have needed $450 million to break even.

“This is a high-stakes game, and with Tenet probably maxing out at $350M worldwide, that’s just not going to cut it,” he says, adding that it was estimated to be a $700 million film before the pandemic. That’s a lot of popcorn and candy that theaters aren’t selling (which is largely how theaters make money).

After seeing the early Tenet receipts, Warner Bros. quickly decided not to risk Wonder Woman 1984 on those audiences, pushing it to Christmas Day. But in the wake of No Time to Die and Dune each being pushed back a year and Regal Cinemas shuttering, we’re wondering whether Wonder Woman will actually arrive this Christmas.

What will theaters do if Wonder Woman (or Disney / Pixar’s Soul, the other big family film due out this year) are further delayed?

A lot of hopes pinned on ‘Wonder Woman’ and ‘Soul’

“You need good content to get people back to the movies,” says Hickey, arguing that the studios and theater owners will need to coordinate if theaters are to survive, instead of continually pushing movies back. He says it’s a good sign Disney hasn’t delayed Soul yet, and that if key markets like Los Angeles and New York reopen their theaters, maintain safety requirements, and “play some good movies,” he thinks audiences will start to return.

But Pachter argues it won’t matter until there’s a vaccine because people are still afraid of potentially catching COVID-19 — “Imagine being in the theater and hearing somebody cough,” he asks me — and neither Benchmark nor Wedbush is expecting things to normalize anytime soon. “The box office is pretty much destroyed from mid-March of 2020 to mid-March of 2021,” says Pachter, calling it “a lost year” for the industry. Hickey says his company’s models bring us “close to normal” in 2022.

And while Pachter thinks it’s “very easy” for the studios to keep pushing back films right now and hope they’ll find an audience later — particularly because the pandemic initially created a multi-month hole in film production, too, leaving a gap for these films — they won’t be able to do that forever because there isn’t enough room. With 130 major studio releases each year, there are only so many movies that can get pushed before there are too many for theaters to screen.

“(We) have to prepare for the inevitability that one (or more) of the major chains — AMC, Regal, Cinemark — may not survive if this goes into next summer,” says Bock, referring to COVID-19’s impact on theaters. There are many factors that could keep a vaccine from arriving before then. But even if one or more of the big theater chains go under, it’s not necessarily the end of American big-screen cinema.

No one I spoke to believes that Disney’s experiment to skip theaters with Mulan was necessarily a success — or that Netflix, Amazon, and other streamers will simply snap up the big blockbuster films, killing theaters in the process. Studios still need theaters to maximize their returns. “The theaters will survive; they just may not be run by the same people,” says Pachter. He points out that it’s not easy to simply turn a multiplex into a department store, and he suggests that while hundreds or thousands of theaters might close, the failing movie chains might simply be snapped up by new investors.

“A vaccine is coming. If it comes a year from now, I think the owners of the listing chains will change out. If it’s in the next three months, all of them survive,” says Pachter. “Even if the announcement is 10 months from now, I think landlords would work with the movie chains and not force them to go away. It’s the not-knowing that’s the risk.”

So like the rest of US society, the theaters remain in limbo.

Netflix’s The Old Guard: Where You’ve Seen The Cast Before