A drone, 7 GoPro cameras, 2 Wi-Fi GoPro trigger remotes, a Canon DSLR, multiple camera lenses, 7 heavy duty tripods, 8 memory cards, 8 walkie-talkies, 7 high capacity power banks, a anemometer, countless charging and data transfer cables, an optically stabilizing binocular, a 4TB external hard drive, all packed in two black military grade pelican cases. I still remember the glances that I got from people at the airports while bringing all my research gear from the USA to India in the summer of 2017. I looked like a man on a mission… a very important mission. It was near certain that I would be pulled out at the security check at every airport. I had my elevator pitch ready on how all these gadgets were to help me unravel the mysteries of the flying dragon!

I was traveling to the Agumbe Rainforest Research Station (ARRS); nestled in the Western Ghats of Karnataka, the Agumbe rainforest is home to one of many species of gliding lizards belonging to the genus Draco found in Asia. Famously referred to as the flying dragons of the animal kingdom, these magnificent, yet cryptic creatures are not your conventional gliders. Measuring approximately a palm length, they launch from treetops and spread their wing like Batman’s cape. Once airborne, they deftly manoeuvre the jungle maze, actively controlling their aerial descent and covering distances over 100 times their body length in less than a few seconds. When it’s time to land, they reorient themselves like a parachute deploying from a fighter jet, slowing down and landing on their intended target tree.

My goal was to understand the mystery behind their effortless and well-choreographed gliding behaviour, and the gadgets were the key to unlock this mystery.

So, what was my game plan? My team and I would set up a makeshift flight arena cordoning off two trees in the jungle. One would be the takeoff tree and the other, the landing tree. Lizards would be caught and released on the takeoff tree. The 7 GoPro cameras — five mounted on tripods and one each on the takeoff and landing trees — would simultaneously record a glide from different angles. Each camera was connected to a power bank so that it could be continuously charged for extended bouts of recording. The walkie-talkies were hung on the tripod into which I could speak and record audio notes (ambient temperature, wind speed, animal behaviour), and also use the audio to sync frames across all cameras. The Wi-Fi remote would trigger start/ stop recording for all the cameras. The cables were the underlying network connecting everything together. All these gadgets had to work in unison for the post recording computer-vision wizardry to work and stitch all the views together and produce three-dimensional position data. This would form the basis of all my analysis.

Did it work? As is the case with most things in life, some improvisation (‘jugaad’) was required. The first ‘jugaad’ came with the GoPro cameras. Being action cameras, GoPros are ultra-portable and rugged, capable of handling extreme (sort of) conditions. Or at least that’s what I believed. In the hot and humid tropical weather, when temperatures reached close to 35C, one or more of the cameras would invariably overheat and automatically switch off. Losing any of the cameras was like losing a piece of a jigsaw puzzle — without it, the picture would be incomplete. This was bound to happen, and a fix was critical. We sourced plastic plates from the nearby town as personal umbrellas for each camera. This did not help. We painted the plates white to reflect sunlight better. This did not work either. Time was running out, especially given that I had just a month before the monsoon hit and the lizards’ activity dropped drastically.

Enter Shankar CM, the station manager-cum-electronics wizard. Within a few hours of reconsidering our options, we decided to build personal cooling rigs for each camera. Thanks to Shankar’s ingenuity, we sourced materials from the nearby town and computer fans from Bangalore. But the logistics posed another dilemma. There is no delivery service and Agumbe is beyond Amazon and Flipkart. So Shankar came up with another local solution. The conductor of a state bus on the Bangalore-Agumbe route delivered the fans for us from a local shop in Bangalore. Shankar spent a few days making customized circuits to power the fans using the power bricks. Lo and behold, each camera had a personal cooling system with a safety net around it to prevent any harm to the lizard from the spinning blades. The power bank would now charge the camera and run the fan. We did a test run and the cameras could now run for more than 4 hours without powering off.

The second ‘jugaad’ – the dragon catcher. We had to spot (using binoculars) and catch lizards perched on tall areca palms so that they could then be released in the flight arena for recording. The lizards were generally high up in the trees and it was a struggle running around trying to find one that was within arm’s reach. Shankar’s clever creations came to the rescue again. Using tripod poles and a metal tong, Shankar was able to make a long pole (6m) with a horseshoe shaped wire attached to the tong at one end which was wrapped with a thick soft padding and cloth hanging from it. A string connected to the horseshoe shaped wire hung at the other end. When pulled, the string would close the horseshoe, wrapping it around the tree trunk; this would force the lizard to climb downwards, and right into our waiting palms! This dragon catcher might seem rudimentary and may not instantly qualify as ‘tech’, but this contraption proved to be one of the most useful pieces of gadget in the forest to capture lizards for recording.

I can go on and on about the use of technology – how the drone helped map the jungle landscape to measure the lizard territory, to the use of DSLR camera to capture qualitative behaviour data and all the pretty pictures of the work that you see here. But none of this would have been possible without the group of like-minded, curious people that helped me set up and use the gadgets that enabled data collection in ways that were not possible before. I will probably go out on a limb and say that it was these gadgets that allowed me to meet so many people, share my love for research, and form a community which I now call the ‘Draco family’. 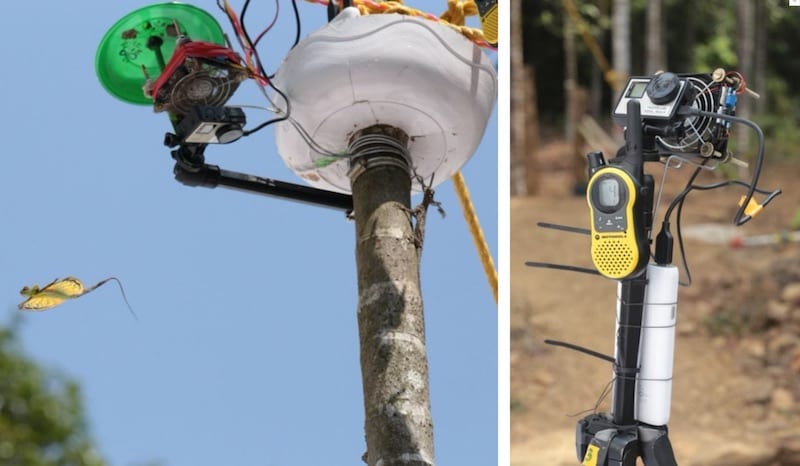 Pranav Khandelwal is an Indian researcher fascinated by the workings of the natural world around us. He studies the underlying processes that enable animals to move in complex spatial environments and how it can be applied to real-world applications. His research heavily relies on using consumer-grade technology as a tool to acquire behavioural data in real-world settings.

Shankar CM specializes in customized solutions for Ecological research equipment. He has worked in remote locations in India working on projects related to animal monitoring and conservation.

This series is an initiative by the Nature Conservation Foundation, under their programme Nature Communication to encourage nature content in all Indian languages. If you’re interested in writing on nature and birds, please fill up this form.

How to find the best deals during online sales? We discussed this on Orbital, our weekly technology podcast, which you can subscribe to via Apple Podcasts, Google Podcasts, or RSS, download the episode, or just hit the play button below.

Batman v Superman: Zack Snyder On The ‘Hatred’ The Studio Had For Ben Affleck’s DC...

Hurricane Laura: 400,000 without power in Louisiana