Wing, LG’s unannounced smartphone with a main display that swivels to reveal a smaller secondary screen, has leaked again in a series of renders published on Twitter by Evan Blass. The images show a couple of different use cases for LG’s unusual form factor, including watching video on the main screen while the playback controls appear on the secondary display, and displaying two apps side by side. The new phone is due to be revealed at 10AM ET today.

More examples of how the two screens can be used emerged over the weekend, thanks to LG developer documentation uncovered by NextPit. According to LG, users will have the option of saving combinations of apps to open simultaneously, and you’ll also be able to rotate the phone so that the swiveled main screen is above, below, to the left, or to the right of the secondary display.

Promotional images give an idea of how the phone’s displays can be used. Image: Evan Blass 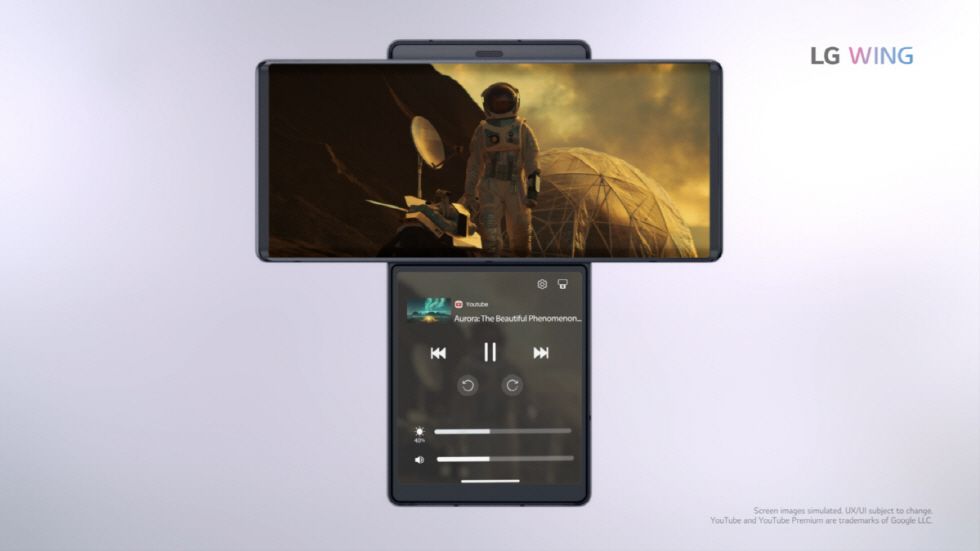 One app can extend across both displays simultaneously.Image: Evan Blass

The LG Wing appeared in a leaked video in August and again earlier this month. But these new official images and developer documentation give us a much clearer look at the unannounced device and how its software should work.

News of the LG Wing first leaked in May. At the time, reports indicated that its main display would be 6.8 inches big, while its secondary display would measure just four inches corner to corner. It’s expected to support 5G and will be powered by a Snapdragon 7-series processor. Three rear cameras are expected, with the main sensor having a resolution of 64 megapixels.

LG is no stranger to making multiscreen Android devices. However, in the case of its previous phones, like the LG G8X and LG V60, their second screens came in the form of optional cases. But with both phones, LG’s software ended up letting the overall experience down. Android isn’t designed for phones with two screens, which means manufacturers like LG and now Microsoft have to build their devices’ multiscreen functionality themselves, often with mixed results.

LG’s official announcement for the Wing is due to kick off at 10AM ET later today. You’ll be able to watch it over on LG Mobile’s official YouTube channel.

JoJo Siwa Comes Out As Gay

Cardi B Files For Divorce From Offset