Deep within the acidic clouds of Venus, astronomers have detected a tantalizing gas never found on the planet before — a gas that, remarkably, could be a sign of life on the hellish world. The gas’s presence isn’t enough to say for sure that Venus hosts life forms, but the fact that it exists in the planet’s clouds indicates that something is going on there that we don’t fully understand.

The gas in question is a nasty one called phosphine, a toxic and explosive molecule with a lingering odor of garlic and dead fish. Astronomers discovered the putrid gas lurking within a layer of clouds on Venus, where temperatures are pretty close to those on our planet. They didn’t find much — just small traces in the swirling mix of sulfuric acid clouds that surround the planet. “It’s equivalent to a few tablespoons in an Olympic sized swimming pool,” David Clements, an astrophysicist at the Imperial College of London and part of the team that made the discovery, tells The Verge.

But finding even a small amount of phosphine on Venus is enticing because of how the gas is made here on Earth. Either it is manufactured artificially by humans — into products like fumigants or biological weapons — or it is a natural byproduct of life. Phosphine can be found in swamps and marshlands, where it’s thought to be produced by microbes. It can also be found in the guts of animals or in the poop they leave behind. Above all, it’s a gas that is almost exclusively associated with life on Earth, raising the possibility that it could be a sign of microbes floating in the Venusian clouds.

“it has to come from something completely unexpected.”

Or it could be coming from something that we can’t yet comprehend. An international team of researchers, writing today in Nature Astronomy, tried as hard as they could to come up with other explanations for the gas they found on Venus. They modeled things like lightning strikes and meteors bombarding the planet’s surface to see if such phenomena could produce the amount of phosphine they’ve seen. So far, nothing matches up. “That’s why this is such an extraordinary detection, because it has to come from something completely unexpected,” Clara Sousa-Silva, a molecular astrophysicist at MIT and one of the authors on the study, tells The Verge. “At some point, you’re left with not being able to explain it. Except we do know of a strange way of making phosphine on terrestrial planets — and that is life.”

The idea of finding life on Venus may seem absurd, as the planet embodies the definition of a hell scape. Venus is a barren wasteland, surrounded by a thick carbon dioxide atmosphere. Temperatures can soar to nearly 900 degrees Fahrenheit on the surface, hot enough to melt lead (and most spacecraft). Heavy clouds swirling around the planet are made of droplets of sulfuric acid that are so acidic, we can’t even measure them on our own pH scale. “It is literally billions of times more acidic than the most acidic environment on Earth,” Janusz Petkowski, an astrobiologist at MIT and an author on the study, tells The Verge.

Still, astronomers have considered the possibility of life forms surviving in this unmerciful place, specifically in the planet’s cloud tops. Celebrity astronomer Carl Sagan and biologist Harold Morowitz proposed the idea in 1967, and astronomers have speculated on it ever since. Scientists fixated on dark patches within Venus’ clouds, regions that absorb more ultraviolet light than other areas. A possible explanation for these blemishes? Large swaths of light-soaking microorganisms that swell and shrink over time, akin to massive blooms of algae. “The idea has been around but nobody had really looked into it seriously until we proposed a lifecycle for the bacteria,” Sanjay Limaye, a planetary scientist at the University of Wisconsin who proposed an explanation for life on Venus and was not part of this study, tells The Verge.

The planet embodies the definition of a hell scape

Finding hard evidence for life on a harsh world like Venus poses a particular challenge. Some probes sent to Venus have actually melted while plunging to the surface, and none have turned up any evidence for life just yet. On Earth, astronomers can study the planet’s atmosphere from afar to determine if any molecules have been farted out by something biological. Hunting for these gases — so-called biosignatures — is one of the best methods astronomers have to determine if life is lurking on another planet.

Phosphine has emerged as an intriguing gas to watch. Recently, Sousa-Silva and some of the researchers on this discovery presented phosphine as a possible biosignature because of its association with some Earth life. That association is still somewhat mysterious. We still don’t know exactly which bacteria produce phosphine on Earth, but some laboratory studies suggest complex microbial communities spawn the substance. Plus, it takes a lot of energy to make phosphine, and life is a particularly energetic source. “We don’t know why life on Earth is making it, but it makes sense that only life is making it,” Sousa-Silva says. “Because spontaneously, it just wouldn’t be made on an environment like Earth.”

The James Clerk Maxwell Telescope in Hawaii, one of two telescopes used to make the phosphine detection on Venus.Image: Will Montgomerie / EAO / JCMT

With phosphine in mind, an international team of researchers used two ground-based telescopes — the James Clerk Maxwell Telescope in Hawaii and the Atacama Large Millimeter Array in Chile — to search for any possible signatures of phosphine in Venus’ atmosphere. Sure enough, they found the gas at a concentration of five to 20 parts per billion in the atmosphere. That’s a lot when you compare it to how much is found on Earth, where the gas is concentrated in parts per trillion and parts per quadrillion. “That is all very much evidence pushing towards this exotic explanation of something replenishing it and something making it at large quantities,” says Sousa-Silva.

The potential is certainly there for this detection to be extraordinary, but no one is crying “aliens” just yet. The astronomy community has been down this road before, where a discovery is hailed as finally being The One only to somewhat fall apart later. Perhaps the most famous example was the supposed discovery of fossilized bacteria in a Martian meteorite back in 1996, which prompted a speech by then-President Bill Clinton. Over time, the claim didn’t hold up to scrutiny. “I’m maybe not jumping up and down here,” Victoria Meadows, an astrobiologist at the University of Washington who was not involved with the study, tells The Verge. “We’re in a “Let’s wait and see,” kind of situation. I think it’s a very intriguing discovery, but it definitely needs to be explored more.”

no one is crying “aliens” just yet

First, we have to be sure that the gas is, indeed, phosphine. The detection isn’t super strong, and even the researchers admit the possibility that this signal could be explained by another gas, sulfur dioxide. Further observations of the Venusian atmosphere are needed to really confirm that phosphine is there.

If the phosphine detection is confirmed, then people will set to work figuring out where it’s coming from. It may turn out that life isn’t even the best explanation. The phosphine may have been found in clouds with moderate temperatures, but the area is still a ghastly place for life to survive, even for the hardiest of microorganisms. “There’s nothing definitive saying it is biology,” Rakesh Mogul, a biological chemist at California State Polytechnic University focusing on extreme microbial life, who is not involved in the study, tells The Verge. “There’s still a lot of unknowns. And it’s nice to put biology as the answer, but really, as scientists, we need to back it up and make sure we exhaustively study all the other possibilities.” 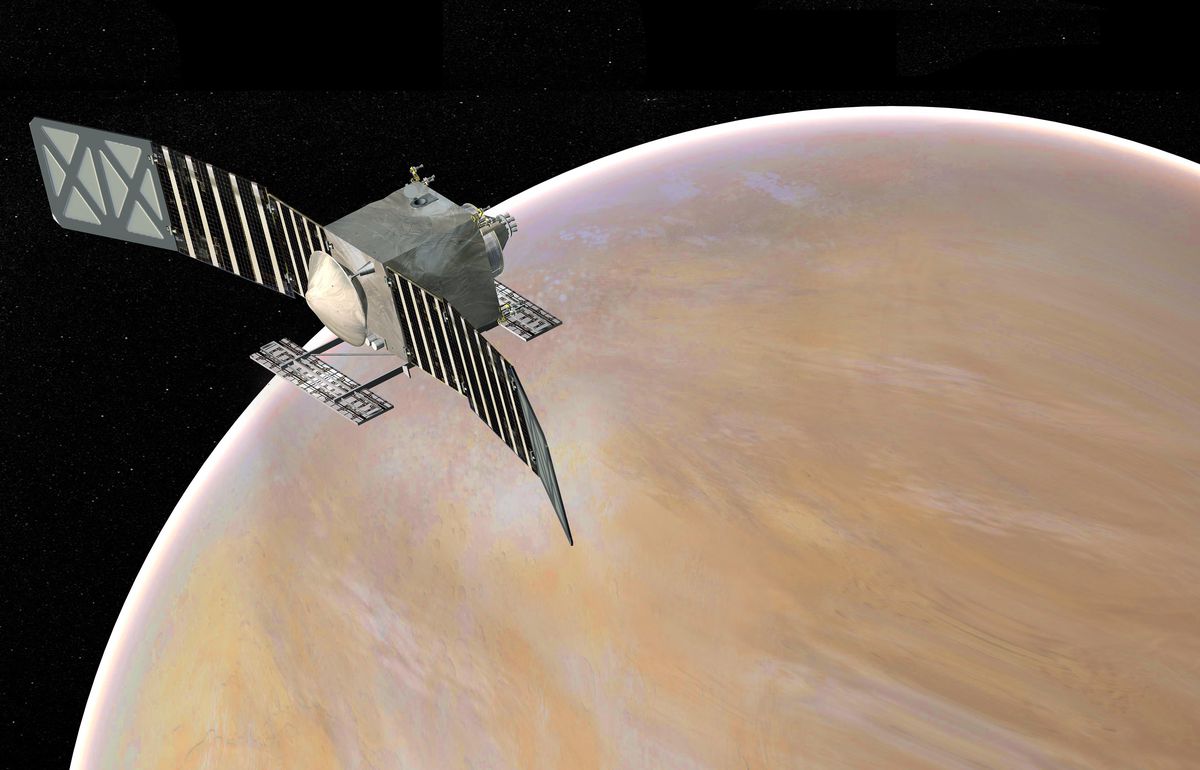 An artistic rendering of the Veritas spacecraft, a proposed mission to Venus out of NASA’s Jet Propulsion Laboratory.Image: NASA/JPL-Caltech

If it turns out that life is a good explanation, this discovery could seriously raise Venus’ clout as a place to visit in the future. Despite its proximity to Earth, Venus has gone largely unexplored over the last few decades, while our other neighbor Mars has received much more attention. Confirming phosphine on Venus could prompt the creation of new microbe-hunting missions to the cloudy planet. The requirements for those types of missions will likely need to be much more stringent than before to prevent contamination of the Venusian environment. “It’ll need to be a global conversation of what the ethics of future observations of Venus are,” Sarah Rugheimer, an astrobiologist at Jesus College, Oxford, who was not involved in the study, tells The Verge. “If you’re talking about going in and scooping up the Venusian atmosphere and potentially disrupting the habitat, I think we need to have a conversation about that.”

Finding strong evidence of life on Venus would completely change our understanding of what makes a habitable planet. During our search for life off of Earth, we’ve focused on planets that look a lot like our own. But Venus may tell us we need to expand our criteria. “If it is microbes, then life is really different and can create creatures in environments that we might never expect,” says Rugheimer.

Ultimately, everything comes back to one question: are we alone? Microbes on Venus may not seem that impressive, but if life can form on two worlds right next to each other, that opens up the possibility that life is much more abundant in the Universe than we think.

No matter what, this detection is just the beginning of a long journey to discovering more about Venus and its potential for habitability. Right now, there’s no definitive answer. There may never be. “As they say, extraordinary claims require extraordinary evidence,” says Clements of the Imperial College of London. “We’ve got pretty good evidence, I wouldn’t say it’s extraordinary yet.”

To dive deeper into this discovery, The Verge produced a video about the phosphine detection, which you can check out at the top of the article. Let us know what you think of the find in the comments.

MemRegenX is A Breakthrough for Cognitive Memory

When is ‘Homecoming season 2’ going to be released? Watch the teaser here! Is Julia...

That Time A Wildly Heavy Backpack Took Down Michael Rooker On The Set Of Love...