Image copyright
We The People/ GoFundMe

Daniel Prude died a week after he was restrained by police

An unarmed black man died in New York state after he was hooded by police and held face down to the road for two minutes, body camera footage shows.

Daniel Prude, 41, who had mental health issues, was restrained in March by police who put a “spit hood” – a device used to stop detainees spitting or biting – on his head.

He later died of asphyxiation but his story has only now been made public.

His death was two months before the killing of George Floyd.

Mr Floyd died after a white policeman knelt on his neck for nearly eight minutes in Minnesota. Anti-racism protests broke out in the US and globally in the wake of his killing.

How did Daniel Prude die?

In a news conference on Wednesday, Mr Prude’s brother, Joe, said he called police in Rochester on 23 March as his sibling was showing acute mental health problems.

A warehouse worker from Chicago and father of five, Daniel Prude was visiting his brother at the time of his death.

Police body camera footage obtained by the family through a public records request shows Mr Prude, who had been running naked through the streets in a light snow before police arrived, lying unarmed as officers restrain him on the ground.

The video shows that Mr Prude complied immediately when officers arrived on the scene and ordered him to lie on the ground and put his hands behind his back. He can be heard saying: “Sure thing, sure thing.”

He becomes agitated, at times swearing at the officers who surround him and spitting, but he does not appear to offer any physical resistance, according to the footage.

Mr Prude told officers he was infected with coronavirus, and they placed a white “spit hood” over his head.

One officer is seen pressing down with both hands on Mr Prude’s head and saying: “Stop spitting.” 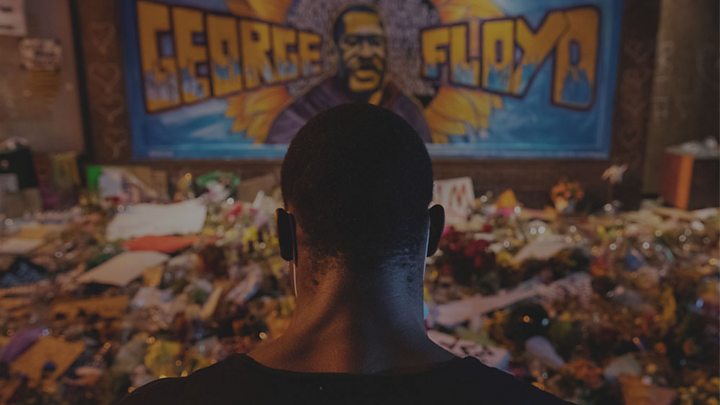 After he stops writhing and goes quiet, one officer notes: “He feels pretty cold.”

Medics try to revive him before he is carried into an ambulance. He was taken off life support a week later on 30 March.

The family’s lawyer said the reason the case was not made public earlier was that it had taken “months” for police footage to be released.

According to a post-mortem examination report seen by the Rochester-based Democrat and Chronicle newspaper, Mr Prude’s death was a homicide caused by “complications of asphyxia in the setting of physical restraint”.

The report also listed PCP, a strong hallucinogenic drug, as a complication.

What has the reaction been?

In a statement, New York state’s attorney general called the death a “tragedy” and said an investigation was under way.

The officers involved have not been suspended.

Protesters gathered in the city of Rochester, New York, on Wednesday over Mr Prude’s death.

Rochester police used pepper spray and pepper balls against some demonstrators outside the Public Safety Building, according to the Democrat and Chronicle newspaper.

Several people were briefly taken into custody after entering the building, which serves as police headquarters, the local media reports say.

What are ‘spit hoods’ and why are they controversial?

“Spit hoods” are mesh fabric hoods placed over the heads of suspects. They are intended to protect officers from a detainee’s saliva.

Critics who oppose their use say they are distressing and humiliating, can cause panic in the detained person, and make it harder to notice if a prisoner is having difficulty breathing.

In recent years, they have been scrutinised as a factor in the deaths of several detainees in the US and other countries.

In the UK, campaign group Liberty said that, as of February 2019, “spit hoods” were being used by at least 30 of the 43 police forces in England and Wales.

Back in 2016, UK police forces told the BBC they only used them when “proportionate, appropriate and justifiable” to protect officers. The Metropolitan Police says its medically supervised tests have found “spit hoods” present no risk to a suspect’s breathing.

The death of George Floyd sparked huge protests in the US, some violent, against police brutality and racism in both the police force and society in general. Demonstrations were held in many other countries.

News of Mr Prude’s death came amid heightened tensions in the US after black man Jacob Blake was shot seven times in the back during an arrest in Kenosha, Wisconsin, on 23 August, sparking days of protests in the city.

Democratic presidential nominee Joe Biden on Wednesday called for charges against police involved in Mr Blake’s shooting and that of Breonna Taylor, an African-American woman who was shot eight times by police who entered her apartment in Louisville, Kentucky on 13 March.

“I think we should let the judicial system work its way,” he told a news conference in Delaware. “I do think, at a minimum, they need to be charged, the officers.”

US Attorney General William Barr dismissed accusations that black and white Americans were treated differently due to police racism.

In an interview with CNN on Wednesday, he said it was very rare for an unarmed black person to be shot by white officers.

“I think the narrative that the police are in some epidemic of shooting unarmed black men is simply a false narrative,” he said.

‘Saints Row 3 Remastered’: Release Date, Plot And Other details You Want to Know!

Discover the sly social critique of this Reagan-era teen thriller