Demonstrators listen to speakers near the Lincoln Memorial

The sister of George Floyd, whose death in police custody sparked months of racial turmoil across the US, has urged civil rights protesters to “be his legacy” as thousands gathered for a rally in Washington DC.

Ms Floyd was one of several relatives of black Americans harmed or killed by police to address the event commemorating a historic 1963 civil rights march.

Jacob Blake Sr, whose son was shot in Wisconsin on Sunday, told the rally they were holding court on racism in America – and the verdict was “guilty, guilty, guilty!”.

What is the 2020 March on Washington?

Thousands of people gathered in Washington DC for the event that commemorated the 1963 civil rights March on Washington and in protest at police violence.

Called the Commitment March: Get Your Knee Off Our Necks – a reference to the death of George Floyd, who died in May after a policeman knelt on his neck for several minutes – it follows renewed protests over the police shooting of Jacob Blake.

The event brought together generations of activists to call for police reform and to urge Americans to vote in November’s general election. It was organised by civil rights leader Reverend Al Sharpton and Martin Luther King III – the eldest son of Mr King Jr.

The families of black Americans shot or killed by police spoke at the same site where Martin Luther King Jr delivered his I Have a Dream speech. 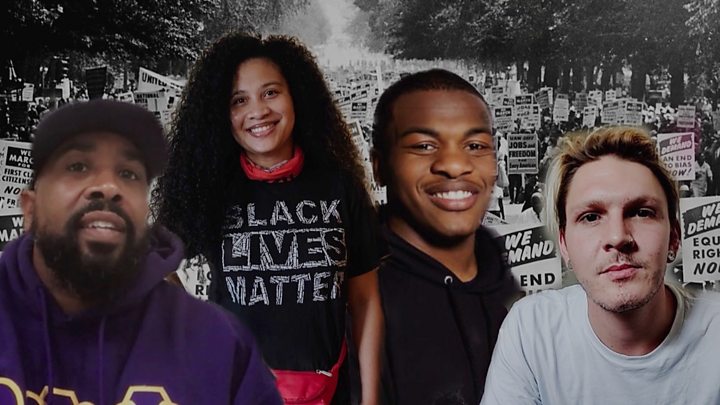 The 1963 March on Washington was a seismic event in US history, credited with spurring the passage of the Civil Rights Act outlawing segregation the following year.

Some 250,000 supporters packed the 1.9 miles (3 km) strip from Lincoln Memorial to the Washington Monument, making it one of the largest political gatherings the country had ever seen.

Rev Sharpton announced the 2020 march – which falls on the 57th anniversary of the 1963 event – at Mr Floyd’s memorial service in June.

His organisation, the National Action Network, worked with Mr King III to convene the rally.

The event comes in the wake of at times violent protests over Mr Blake’s shooting that have left two dead in Kenosha, Wisconsin. Mr Blake was shot and injured by police.

Since Mr Floyd’s death in May, marches in support of the Black Lives Matter movement and against racism and police brutality have swept the US and the globe.

Who else spoke at the rally?

Speakers during the morning’s programming included congresswoman Ayanna Pressley, who paid tribute to the activism of black Americans of the past whose “sacrifice and self-determination shaped history and brought us to this moment”.

“We are Black with a capital B,” she said. “We are the manifestation of the movement. We are a symbol of social, political and cultural progress.”

Other presenters included a young activist who called for an end to the gun violence that plagues black communities, and representatives from unions, gay rights groups and Hispanic activism groups, who expressed solidarity with the Black Lives Matter movement.

Among the initiatives on the agenda were slavery reparations, defunding police departments and investment in healthcare, housing and social services in black communities, organisers said. It was drafted by hundreds of delegates from across the country.

Attendees lined along Constitution avenue as early as 7am in anticipation of the march.

“I’m here to play my role and give this administration the mandate that we mean what we say: we want change,” he says.

For Rex Ikwueme there’s a sense of urgency.

“We’re in a crisis and we really have got to get things in order,” he says. “We can’t be living like this and we can’t be seeing my people die on film every week. That’s not normal.”

“Clearly with the way that the police have been behaving in different areas of the country, they’re looking at us as targets and we can’t have that,” he continued. “It contradicts the entire American dream.”

Police violence against African-Americans is top of mind today for many marchers.

Artelia Bryant, from Roanoke, Virginia, says in her opinion, little has changed since 1963.

Where do they start?

“Cops being arrested,” says Bryant. “They can start with the cops that killed Breonna Taylor.”

Speeches preceded a march to the Martin Luther King Memorial

‘Frozen 2’ DVD: release date, cast, plot, what the sequel was about, details and everything...