Two Hong Kong opposition lawmakers are among 16 people arrested over anti-government protests, as a crackdown on democracy supporters widens.

Lam Cheuk-ting and Ted Hui Chi-fung from the Democratic Party were arrested at their homes on Wednesday morning.

Mr Lam is accused of rioting over a July 2019 incident when masked men attacked protesters after a rally.

He was one of dozens injured in the attack, where police were accused of failing to protect democracy activists.

A police source told the BBC that a total of 16 people, including the two lawmakers, had been arrested in the operation on Wednesday.

Mr Lai was paraded through his Apple Daily newsroom in handcuffs as some 200 police raided the office as part of an operation that also saw nine other activists arrested, including Agnes Chow, a prominent youth activist.

The verified Facebook pages of the two opposition politicians – both critics of Beijing – confirmed their arrests on Wednesday.

A tweet from Mr Lam’s team said he was accused of rioting at Yuen Long train station on 21 July last year.

It added that police also accused him of conspiring to damage property and obstruction of justice on 6 July last year.

Mr Hui’s office released video footage of his arrest, reported AFP, where officers said they were charging him with attempted obstruction of justice, access to a computer with criminal or dishonest intent and criminal damage over the 6 July protest.

The violent attack on pro-democracy protesters returning home from the 21 July rally, at a train station in Yuen Long in north-west Hong Kong, was captured by victims and bystanders on mobile phones. 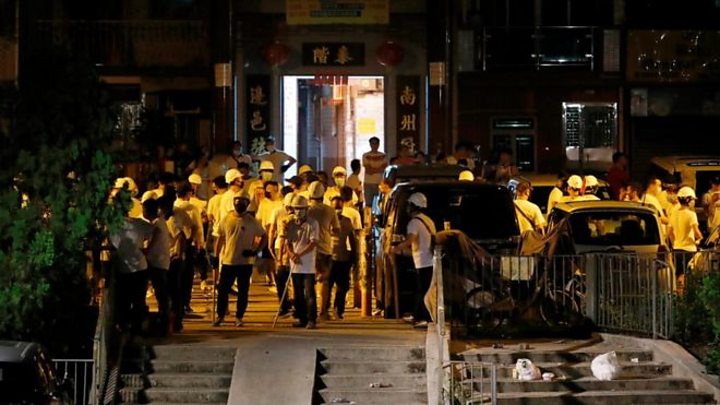 The footage, which went viral on social media, showed groups of men dressed in white shirts and suspected to be triad gangsters beating passengers with rods.

Police were late to arrive on the scene and the incident contributed to growing mistrust of the force at a time Hong Kong was faced with widespread protests.

Police have so far arrested 44 people on suspicion of involvement in the Yuen Long mob attack, seven of whom have been charged with rioting, according to Reuters.

“We know you were protecting citizens on the train on that day,” wrote one. Another posted that the move kept “the actual instigators at large”.