Media captionWho is Kamala Harris? A look at the life and career of a historic VP pick

Kamala Harris has accepted her historic nomination as the US Democratic party’s vice-presidential candidate, running with Joe Biden for the White House.

The California senator, the first US black running mate on a major-party ticket, assailed US President Donald Trump’s “failure of leadership”.

She said the Republican leader “turns our tragedies into political weapons”.

Mr Biden and Ms Harris will challenge Mr Trump and his Vice-President Mike Pence in the election on 3 November.

What did Harris say?

“We’re at an inflection point,” Mr Biden’s running mate said as she attacked Mr Trump, speaking live from a largely empty hotel ballroom in his hometown of Wilmington, Delaware. 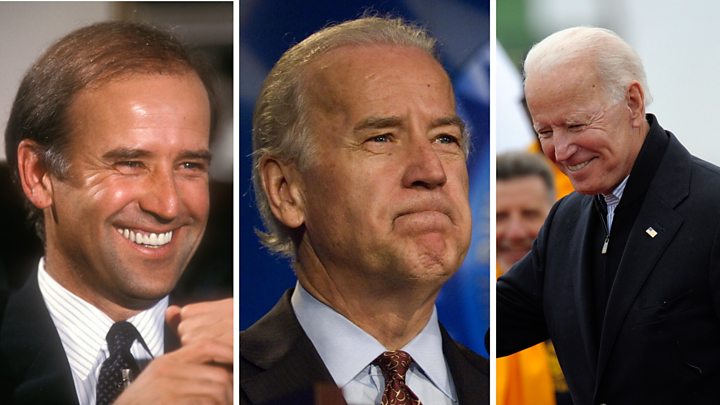 “And here’s the thing: We can do better and deserve so much more.

“We must elect a president who will bring something different, something better, and do the important work.”

She highlighted the disproportionate impact of the coronavirus on people of colour, moving on to the racial justice protests that have convulsed the nation in recent months.

“There is no vaccine for racism. We’ve gotta do the work,” she said listing the names of unarmed black Americans who have been killed by police.

The now-official Democratic vice-presidential nominee faced a bit of a challenge, having to directly follow Barack Obama, the party’s most beloved and rhetorically gifted politician.

What Ms Harris offered was a bit of an amalgam – one that sometimes connected and occasionally plodded. It was part biographical introduction, part sales pitch for Mr Biden and – most notably – part frontal attack on structural racism.

Although she’s been attacked by some on the left for her prosecutorial background, Ms Harris tried to turn that into a benefit for a general election audience, speaking of how she always tries to fight for justice.

Her speech delivered with smiles and warmth, but it took place in a rather haunting environment – a room constructed to replicate a party convention hall, but devoid of the cheering crowds.

It all had slightly post-apocalyptic feeling, which makes it seem that the emptiness of the current pandemic-stricken nation is a feeling Democrats want to highlight – and lay at Mr Trump’s feet.

Will Evan Rachel wood return as Dolores in ‘Westworld season 4’? Everything you need to...

‘Sword Art Online Season 4’ : Get to know more about the gaming journey of...