Media captionProtesters chant anti-government slogans in a show of defiance

Thousands of people have attended the funeral of a man who died during recent protests against the disputed presidential election in Belarus.

Opposition supporters turned out in the capital, Minsk, on Saturday where they laid flowers, waved banners and chanted for the long-time president to resign.

The result has been condemned with widespread allegations of vote-rigging.

The Central Election Commission says Mr Lukashenko, who has been in power since 1994, won 80.1% of the vote and the main opposition candidate Svetlana Tikhanovskaya 10.12%.

But Ms Tikhanovskaya insists that where votes were properly counted, she won support ranging from 60% to 70%.

On Friday, European Union foreign ministers agreed to prepare new sanctions on Belarusian officials responsible for “falsification”. The US has also condemned the election as “not free and fair”.

And on Saturday, three Baltic states called for the vote to be re-run.

What’s the latest with the protests?

Thousands of people waved flags, lit candles and laid flowers at the scene close to the metro station where Alexander Taraikovsky died on Monday. Others held up pictures of injured protesters, while drivers joined in by honking their horns.

Many opposition supporters chanted “Leave!” – a call for President Lukashenko to resign – and some carried signs with slogans against police violence.

The circumstances of Mr Taraikovsky’s death are unclear. Officials say he died when an explosive device went off in his hand during a protest, but opposition supporters dispute this.

His partner, Elena German, told the Associated Press news agency that she believed the 34-year-old was shot by police.

On Friday, Ms German visited the mortuary where Mr Taraikovsky’s body was held.

“There is a seam in the chest area – the hole was sewn up, but there is a black bruise; it’s small but we noticed. His hands and feet are completely intact, there are not even bruises,” she said.

Mr Taraikovsky had worked hard at his automobile repair business, Ms German said, and that neither of them had shown an interest in politics until the presidential election when they decided to support Ms Tikhanovskaya.

What else is happening?

A “March for Freedom” is also planned in the centre of the city on Sunday, a week after the contested election.

It follows Ms Tikhanovskaya’s call for further peaceful rallies across the country on Friday. “Don’t stay on the sidelines,” she said. 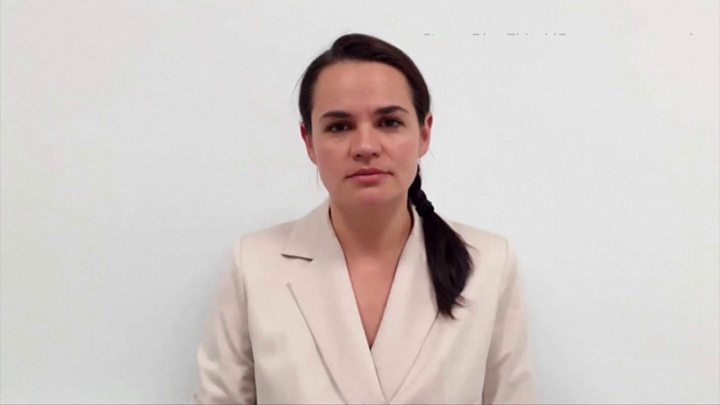 Media caption‘Human life is the most precious thing’: Svetlana Tikhanovskaya speaks out from exile

Mr Lukashenko had said he needed to speak to Mr Putin as the protests were not “a threat to just Belarus anymore”.

In a joint statement on Saturday, the prime ministers of three Baltic republics – Latvia, Lithuania and Estonia – “expressed deep concern at the violent crackdown… and the political repression of the opposition by the authorities”.

‘Scenes unimaginable a few weeks ago’

There has been a clear shift in mood here.

Earlier in the week, police with batons beat anyone who dared to come out on the street in the evening. But following widespread strike action in some of Belarus’ largest factories, people have been emboldened to come out in greater numbers in the daytime.

On Friday, workers from the famous Minsk Tractor Factory joined thousands of protesters in a spontaneous march and rally on Independence Square in Minsk.

Such scenes would have been unimaginable just a few weeks ago – in a country where, in normal times, any opposition to President Lukashenko is brutally repressed.

One woman told us: “We’re sure everything will change. We believe in our victory. That’s why we will come to the streets every day. Every day!”

The leaders said the presidential election was “neither free nor fair” and called for a “transparent” vote “with the participation of international observers”.

“The prime ministers urge the Belarusian authorities to refrain from violence against peaceful demonstrators [and to] release all political prisoners and those that have been detained,” the statement added. 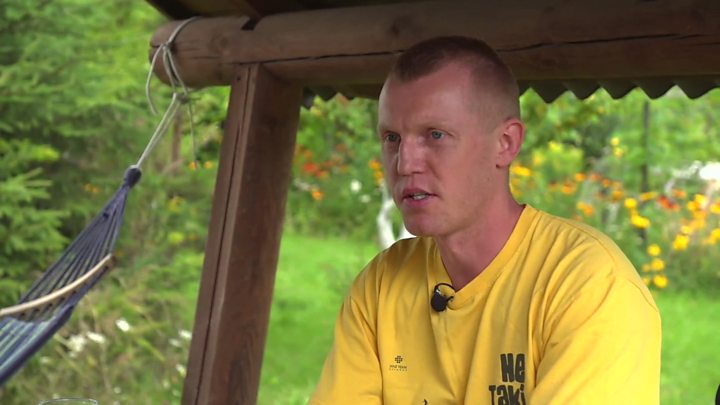 Ms Tikhanovskaya fled to Lithuania following the election after she publicly denounced the results. She said he had sent her children to Lithuania for safety before the vote.

Lithuania and Latvia have also previously said they are prepared to mediate in Belarus, provided the authorities stopped violence against protesters and formed a national council with members of civil society. They warned that the alternative was sanctions.

Mr Lukashenko said on Saturday that he did not need outside mediators to solve the situation in Belarus, state news agency Belta reported.

Some 6,700 people were arrested in the wake of the election, and many have spoken of torture at the hands of the security services.

More about the protests in Belarus

Prisoners continued to be released from the notorious Okrestina detention centre in Minsk on Friday, revealing their bruised and swollen bodies.

“They beat people ferociously, with impunity, and they arrest anyone. We were forced to stand in the yard all night. We could hear women being beaten. I don’t understand such cruelty,” one man said as he showed the BBC his bruising.

Belarus Interior Minister Yuri Karayev said he took responsibility for people being injured and wanted to apologise to people caught up in the violence.

Hospitals in England Struggle in the Grip of the Virus