Hong Kong tycoon Jimmy Lai – the most high-profile person to be detained under a controversial new security law – has warned young protesters they need to be “more cautious” now.

Mr Lai was arrested on Monday, and his newspaper offices raided by hundreds of police, in scenes that shocked many.

Speaking after his release on bail, Mr Lai told the BBC he believed his arrest was “just the beginning”.

There will be “a long fight” ahead for Hong Kong’s freedoms, he added.

Mr Lai, who has been a prominent pro-democracy voice and a supporter of protests that erupted last year, owns Apple Daily, one of Hong Kong’s most-read newspapers.

He and nine other activists were detained on Monday over allegations including collusion with foreign forces, under a national security law imposed by China in June.

The sweep of arrests has raised fears that China will use the new law to undertake a broad crackdown on Hong Kong’s pro-democracy activists and media figures.

Speaking to Newshour on the BBC World Service, Mr Lai said he was surprised when he saw police arrive at his home on Monday morning. 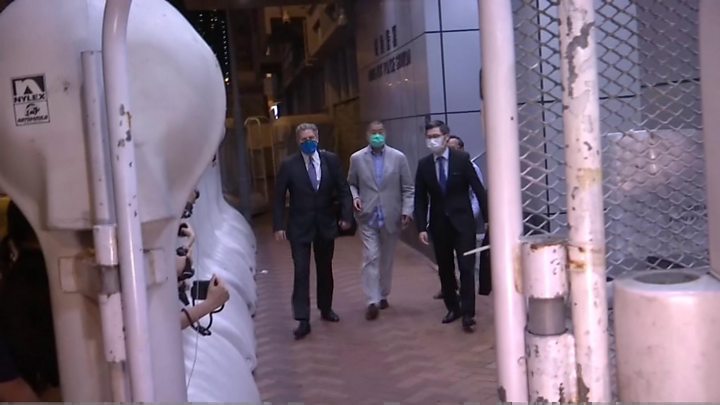 While he had been arrested before, this was “more scary” because it came under the national security law imposed by China, he said.

Both his sons were also arrested on “bogus charges”, he said, although he added that he had no regrets about his pro-democracy activism.

“When I was in custody I could not sleep… I was thinking, if I knew that was going to happen to me now, (with) even more hardship (on the way), would I have done the same thing?

“I would not have (done things) another way – this is my character,” he added.

However, he warned protesters that they would now have to be “more cautious in our resistance to preserve our rule of law and freedom”, as the sweeping new security law made the environment more dangerous for activists.

“We have to be more careful and creative in (our) resistance… we can’t be as radical as before – especially young people – because the more radical (we are) the shorter lifespan we have in our fighting.

“We have to really use our brain and patience, because this is a long fight.”

Mr Lai’s arrest has been welcomed by Chinese state media, who have described him as a “riot supporter” and his publications as having been “instigating hatred, spreading rumours and smearing Hong Kong authorities and the mainland for years”.

Who is Jimmy Lai?

The businessman is estimated to be worth more than $1bn (£766m).

Having made his initial fortune in the clothing industry, he later ventured into media and founded Apple Daily, which is frequently critical of Hong Kong and mainland Chinese leadership.

In 2019 the daily was the most-read paid newspaper in the territory, both in print and online, according to the Chinese University of Hong Kong.

Mr Lai has also been an activist against Beijing’s increasingly tight grip on Hong Kong. In 2019 he supported and participated in pro-democracy protests that lasted for months in the territory.

On Tuesday, the holding company of Apple Daily newspaper saw its stock rise fourfold, as Hong Kongers rallied behind the newspaper and bought stocks in the company following Mr Lai’s arrest.

Who else was arrested?

Supporters of Agnes Chow, 23, have started calling her “the real Mulan”

Mr Lai’s colleagues and two of his sons were among those arrested on Monday.

Separately, prominent youth activist Agnes Chow was arrested, as were Wilson Li, who works as a freelance journalist with UK-based ITV News, and activist Andy Li.

Ms Chow was released on bail late on Tuesday, and told reporters: “It’s very obvious that the regime is using the national security law to suppress political dissidents.”

What is the new security law?

Hong Kong has had a high degree of autonomy since it was returned from British to Chinese rule in 1997, and its residents have had a far higher level of freedom of speech and media than people on the mainland.

But the new law’s key provisions include that crimes of secession, subversion, terrorism and collusion with foreign forces are punishable by a maximum sentence of life in prison.

It makes it easier to punish protesters, and reduces Hong Kong’s autonomy.

The law also gives Beijing powers to shape life in the former British colony in a way it never has before.

Critics say it effectively curtails protest and freedom of speech. China has said the new law will return stability to the territory after a year of unrest.

Sen. Ron Johnson: I Would’ve Felt Threatened By Capitol Mob If They Were BLM Or...