There are 2.6 million miles of pipelines crisscrossing the US that will one day retire. Even in their afterlives, these zombie pipelines will be able to spill toxic materials. It’s happened in the past. There’s also the risk of a pipe one day rising from its grave, exposed by floodwaters or erosion. Or, devoid of oil and gas that once coursed through them, they might accidentally drain bodies of water or do the opposite — pollute them.

The COVID-19 pandemic rattled the fossil fuel industry, which saw oil prices turn negative for the first time ever. The industry will also need to grapple with the looming climate crisis and environmental campaigns that have won recent, high-profile victories against the Dakota Access, Atlantic Coast, and Keystone XL pipelines.

All of that has more people thinking about what comes next for oil and gas companies and the pipelines they’ll ultimately leave behind. The potential risks have some communities worried about what the fate of pipelines running underneath their feet means for their homes and the environment. They’ve begun fighting for a say in what happens to those lines once they’re abandoned. Without protections, they fear they could be left with a big mess and a hefty check.

The question of who’s responsible for zombie pipelines is beginning to play out in Minnesota, where Enbridge’s Line 3 could become the first major pipeline to be abandoned across a vast stretch of North America. “Companies want to put in new lines rather than deal with their old lines, and that’s a national infrastructure crisis,” says Winona LaDuke, executive director of Honor The Earth, a prominent indigenous environmental group. LaDuke’s organization has opposed both the abandonment of Enbridge’s aging Line 3 and the construction of a new line to replace it. “Everybody should watch line 3, it is a precedent,” says LaDuke.

Line 3 is a “vital link,” Enbridge says on its website, transporting crude oil over more than 1,000 miles from where it’s produced in Alberta, Canada, to refineries in Minnesota and Wisconsin. Built in the 1960s, the pipeline carried up to 760,000 barrels per day at its peak — about as much as what 24,000 tanker trucks would haul in a day. But after more than half a century, the pipeline’s capacity has been reduced nearly in half because of its age. Enbridge says that it can continue to operate the aging pipeline at its current capacity with maintenance and repairs, but it wants to instead replace it with another pipeline along a modified route that can again carry 760,000 barrels per day. The company did not respond to a request for comment from The Verge.

LaDuke’s organization opposes the proposed route for the new pipeline, fearing that construction and potential spills along the new route would threaten the health of watersheds and Ojibwe lands in Minnesota. “You don’t get to leave a mess in place for the state of Minnesota and tribes, who are very impacted by this because it crosses three reservations, to clean up,” says LaDuke.

In Canada, the new Line 3 has already been built. The old line will be cleaned out and abandoned in place next year. The country’s National Energy Board oversees pipelines that cross borders and requires companies to submit a plan before abandoning a pipeline that includes how they’ll set aside funds to monitor the decommissioned pipeline and take care of any problems that arise. It’s a provision that’s lacking in the US, although the US Pipeline and Hazardous Materials Safety Administration requires abandoned pipelines left in place to be disconnected, purged of hazardous materials, and sealed. 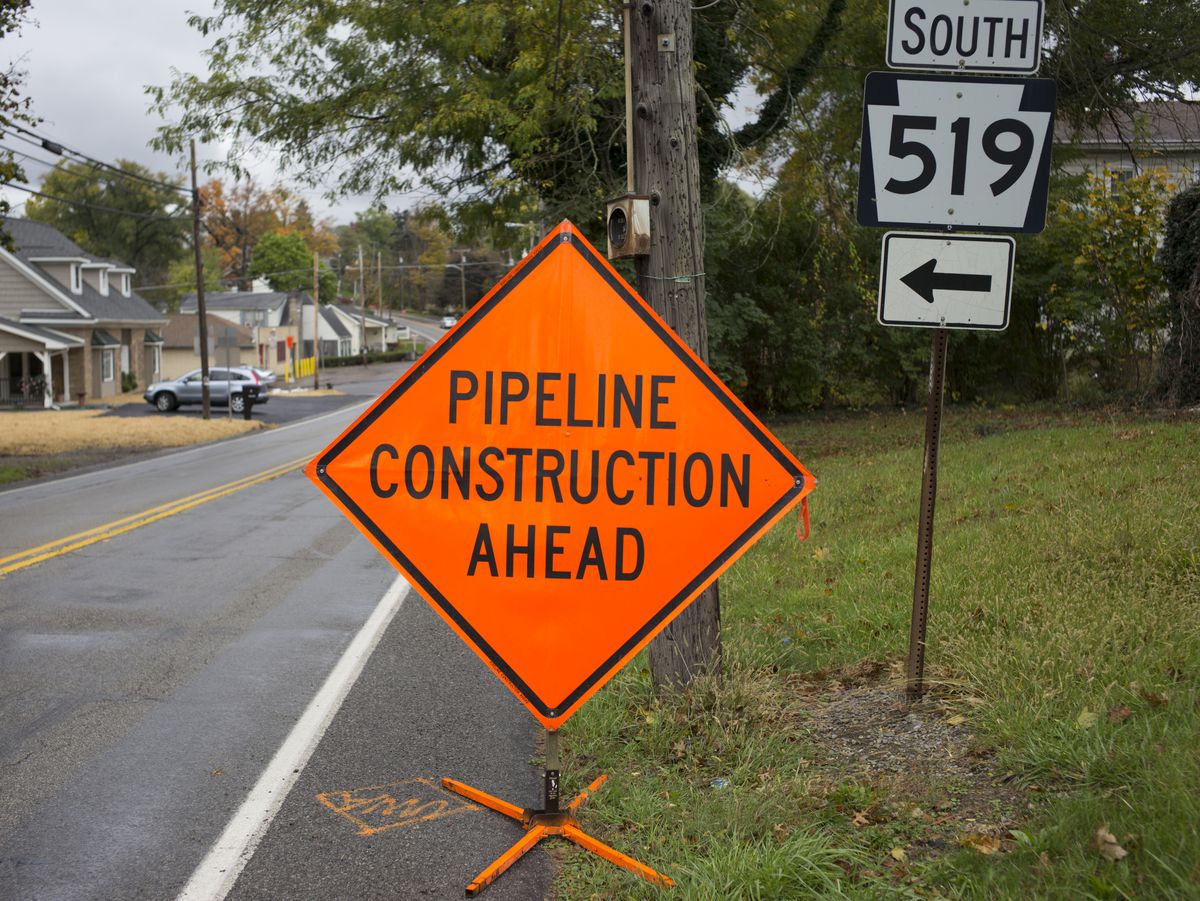 A road sign cautions drivers about oil and gas pipeline construction ahead October 25th, 2017, in Hickory, Washington County, Pennsylvania. Located in the heart of the natural gas-rich Marcellus shale region, residents and farm owners in the surrounding area of Washington County have been selling their land and mineral rights to out-of-state natural gas pipeline companies.Photo by Robert Nickelsberg / Getty Images

There are established methods for safely laying a pipeline to rest. It typically requires companies to submit a plan of action that includes disconnecting the pipe, cleaning it, and filling or plugging it to prevent it from becoming a conduit for water or other materials, and removing any unnecessary equipment connected to the pipeline above ground. It also requires an environmental review that might entail consulting local communities and developing measures to mitigate any risks to the environment.

“It’s not rocket science to do this,” says Alan Pentney, who wrote about procedures for properly abandoning a pipeline in Oil and Gas Pipelines: Integrity and Safety Handbook. It just needs to get done. A properly maintained pipeline might not collapse for hundreds of years, according to Pentney. In some cases, leaving the pipeline in place might cause less damage than tearing it out.

Yet, some advocates and landowners worry that the protections in the US aren’t robust enough to protect people from the financial burden of a decaying pipeline in their yard. “There’s almost nothing in the entire country that protects landowners from pipeline abandonment. All the costs of the cleanup are dumped on land owners,” says Paul Blackburn, a staff attorney at Honor the Earth.

In a bid to appease Minnesota residents in 2018, Enbridge adopted a plan to remove the pipe where landowners request it or else offer them compensation for leaving it in the ground. For those who take the money, “(Enbridge) better pay them big, really big,” says Rick Lundquist, who owns property in northern Minnesota, which has a slice of Line 3 running through it. Abandoning the pipeline in place is a lot cheaper for Enbridge, at $85 million, compared to the $1.28 billion cost of taking it out. But the risks grow the longer Line 3 stays in the ground, according to an environmental impact statement prepared by the Minnesota Department of Commerce.

Keeping an eye on it is important because, left in place, the line runs the risk of contaminating nearby soil and water with leftover oil or the chemicals used to clean it once it’s out of service. Over time, as the pipe breaks down, it could cause the land around it to sink. Or if no longer weighed down with oil, it can begin to rise to the surface — an issue of more concern with Line 3 compared to newer pipelines since it was built before minimum depth requirements were passed into law. 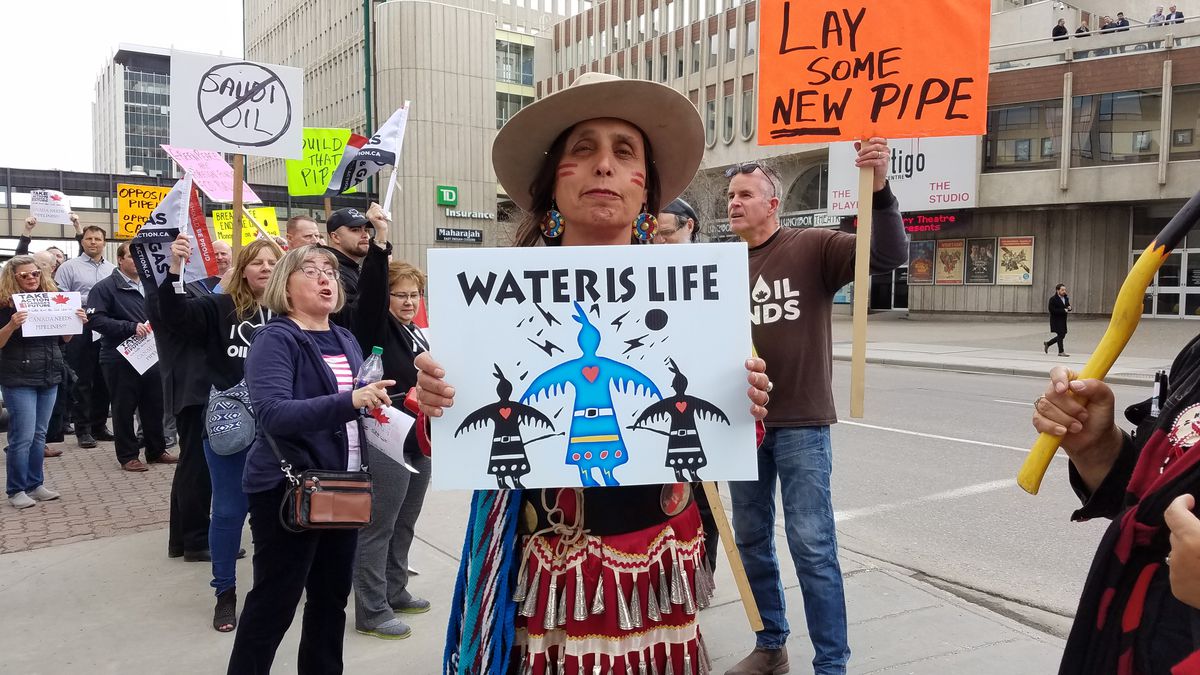 Winona LaDuke protesting in Calgary at an Enbridge shareholders meeting.Image: Honor The Earth

Unlike LaDuke and Blackburn’s organization, Lundquist supports Enbridge building the new Line 3. He just doesn’t want the old one left to rot on his land, and he welcomes the jobs that might come with removing the old line and building a new one.

Mark Borchardt is another landowner worried about being left with the costs of having four Enbridge pipelines — though not Line 3 — cutting through his property in central Wisconsin. “I’ve got 2.2 million barrels of oil, passing underneath my driveway every day,” says Borchardt. When he bought the property in 1994, it only had one pipeline running through it. An easement from 1968 gave Enbridge the right to use a swath of Borchardt’s land to build more pipelines.

“There’s nothing in my easement from 1968 that says ‘Enbridge you must remove the pipe when you’re finished,’” Borchardt says. “All I get are headaches and Enbridge employees tearing up my land to fix their pipe.” Borchardt has since started a nonprofit called Wisconsin Easement Action Team to push for stronger protections in new pipeline easements, with new provisions that require companies to take responsibility for what happens to the pipelines at the end of their lives. 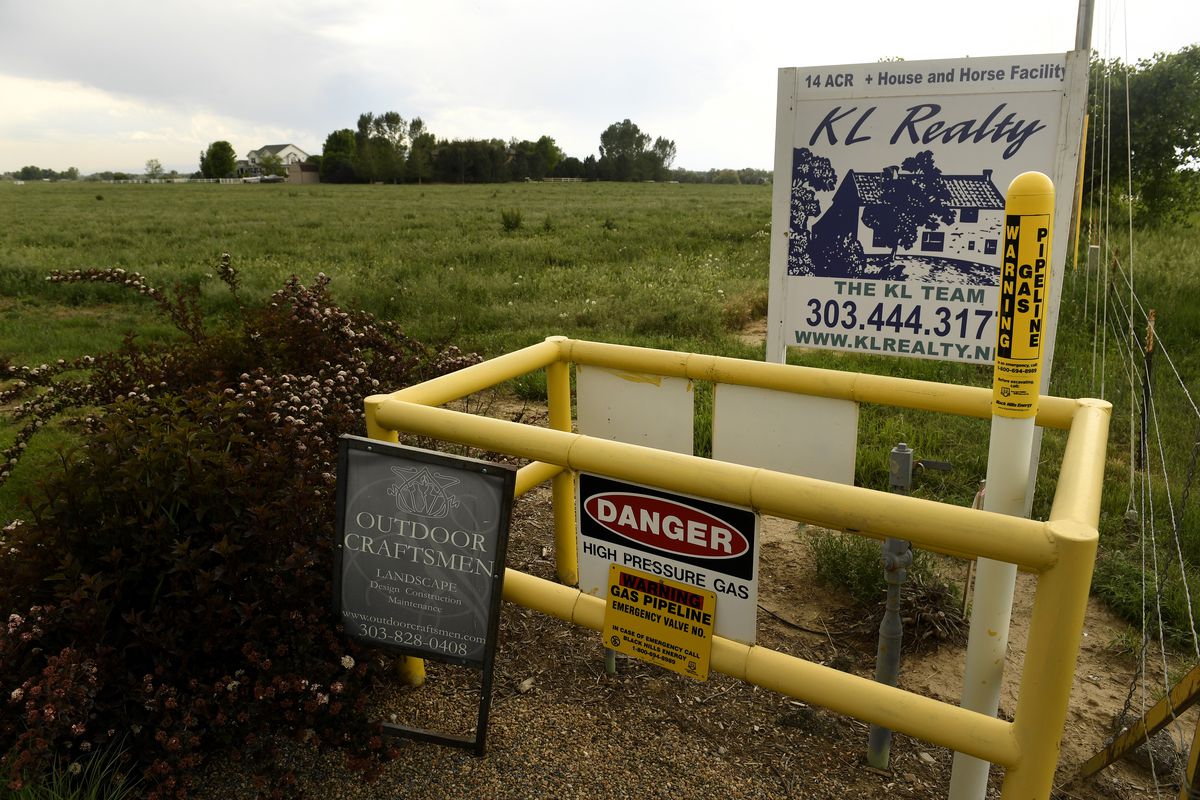 Real estate for sale signs sit next to gas pipelines along Colorado state highway 52 near the Boulder and Weld County lines on June 7th, 2017, near Erie, Colorado. Gas and oil development, exploration, and fracking operations are colliding more and more with subdivision and housing developments as the front range continues to grow.Photo by Helen H. Richardson / The Denver Post via Getty Images

It’s all the more important because the future for oil and gas companies is more uncertain than ever, which makes the future of their pipelines more uncertain, too. The time will come when the US will need to reckon with the fate of all its pipelines — and when that time comes, the companies that operated them could no longer be around to deal with them. The COVID-19 pandemic alone sent oil and gas companies stumbling toward bankruptcy. Even after the economy recovers from the pandemic, there will be more challenges ahead. Global efforts to tackle climate change, adopted in the landmark 2015 Paris climate accord, set nations on a path to cut down greenhouse gas emissions from burning fossil fuels to net zero by 2050. That means a future with more renewables and little to no oil and gas.

“Expect to see more and more pipelines being abandoned.”

After the $85 million it would initially cost Enbridge to safely retire Line 3, it’s estimated it will take an additional $100,000 a year to monitor the abandoned line. That’s a glimpse of the costs that could be passed on to landowners if Enbridge doesn’t pay.

“In the future as crude oil demand decreases, we would expect to see more and more pipelines being abandoned,” says Blackburn. “With the oil industry having less and less money in the future, the risk becomes greater and greater that they’ll just walk away from their pipelines and leave landowners holding the bag.”

The All New Samsung Galaxy F Series Promises to Bring the #FullOn Experience to India Soon!