Pillars which will be used in the construction of the temple

Indian PM Narendra Modi has arrived to lay the foundation stone for a Hindu temple in the northern city of Ayodhya.

Hindu mobs demolished a medieval mosque there in 1992, saying it was built on the ruins of a temple for Lord Ram, a revered deity.

Hindus and Muslims claimed ownership over the site for decades. Last year, the top court gave the site to Hindus, ending a decades-long legal battle.

The inauguration comes amid a massive surge in coronavirus cases in India.

The dispute, which goes back more than a century, has been one of India’s thorniest court cases. The Supreme Court gave Muslims another plot of land in the city to construct a mosque.

The inauguration is somewhat muted affair amid the pandemic. India has been reporting record daily totals – it has recorded more than 1.9 million cases and nearly 40,000 deaths from the virus.

Uttar Pradesh, the state where Ayodhya is located, has confirmed more than 100,000 Covid-19 cases so far.

The idol of Lord Ram is currently in a makeshift temple

But the construction of the temple is a core promise made by Mr Modi’s governing Bharatiya Janata Party (BJP), and is seen as a huge symbolic gesture for its strident Hindu nationalist base.

The area surrounding the event has been cordoned off, and is restricted to invitees – some 310 people, including 135 religious figures – and security personnel only.

UP Chief Minister Yogi Adityanath has already arrived, as have some other senior BJP leaders.

Officials have said they will follow Covid-19 protocols, but BBC Hindi’s Sarvapriya Sangwan, who is at the venue, reports that crowds have begun to gather on the road leading up to and beyond the barricades.

Crowds have gathered to watch the event

People have also climbed onto rooftops to get a glimpse of the venue, and some are chanting ‘Jai Shri Ram’ (Hail Lord Ram). Most are not wearing masks or following social distancing, our reporter says.

A local told the BBC he is “ecstatic” that Lord Ram would finally have “a proper home”.

What has been planned?

Mr Modi is to lay a symbolic silver brick in the sanctum sanctorum, or innermost sanctuary, of the site as scores of devotees watch the event on giant screens across the city.

Hymns about Lord Ram are being played, and the roads are decked with flowers. Many shop fronts too have been painted yellow and saffron flags have been put up everywhere – both colours that Hindus consider auspicious.

Local police and teams of specialised personnel are patrolling on high alert. Officers in riot gear are also in place in case of any violence.

Indian TV channels will offer wall-to-wall coverage to the event.

Media reports say that devotees from across the country have been sending silver and gold – in the form of coins, bricks and bars – to use in the construction of the temple. Police officers are said to have been ordered to guard these precious metals. 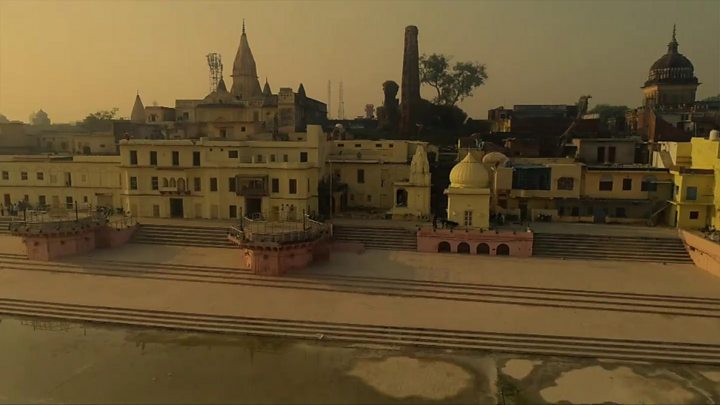 As many as 200,000 bricks inscribed with “Shri Ram” (Lord Ram) that have been collected from devotees over the years will be used to build the foundation of the temple, according to the Times of India.

Chandrakant Sompura, the chief architect of the proposed temple, told news website The Print that the structure would be designed in the “Nagara” style of temple architecture – a popular north Indian temple building style.

The inner sanctum of the temple – where the idol of the primary deity is housed – will be octagonal. The temple will include a large structure of three floors with 366 pillars and five domes.

Mr Sompura said that a memorial wall in honour of those who were involved with the temple movement would be erected.

What was the Ayodhya issue about?

At the centre of the row was a 16th-Century mosque that was demolished by Hindu mobs in 1992, sparking riots that killed nearly 2,000 people.

A skyline view of Ayodhya in Uttar Pradesh state

Many Hindus believe that the Babri Masjid was actually constructed on the ruins of a Hindu temple that was demolished by Muslim invaders.

Muslims say they offered prayers at the mosque until December 1949 when some Hindus placed an idol of Ram in the mosque and began to worship the idols.

Over decades the two religious groups went to court many times over who should control the site.

Security is tight in Ayodhya

What was the final ruling?

In its unanimous verdict, the Supreme Court said that a report by the Archaeological Survey of India (ASI) provided evidence that the remains of a building “that was not Islamic” was beneath the structure of the demolished Babri mosque.

The court said that, given all the evidence presented, it had determined that the disputed land should be given to Hindus for a temple to Lord Ram, while Muslims would be given land elsewhere to construct a mosque.

It then directed the federal government to set up a trust to manage and oversee the construction of the temple.

However, the court added that the demolition of the Babri mosque was against the rule of law.

Stranger things 4 – cast, plot, release date: And the best of the best is...