More than half the residents of slums in three areas in India’s commercial capital, Mumbai, tested positive for antibodies to the coronavirus, a new survey has found.

Only 16% of people living outside slums in the same areas were found to be exposed to the infection.

The results are from a random testing of some 7,000 people in three densely packed areas in early July.

The survey was carried out by the city’s municipality, the government think-tank Niti Aayog and the Tata Institute of Fundamental Research.

It found that 57% of the people tested in slum areas of Chembur, Matunga and Dahisar had been exposed to the novel coronavirus.

Some 1.5 million people live in these three areas located in the western, eastern and central parts of the city.

Scientists involved with the study told the BBC that the results pointed to a number of things about the prevalence of the infection in one of India’s worst-hit cities.

For one, the virus has spread more widely than what was earlier believed in the city’s slums, where more than half of Mumbai’s 12.5 million people live.

Scientists believe the sample tested was “statistically robust” and representative.

“The three areas we chose for the tests had a varying number of reported coronavirus infections, and they were a mix of slums and stand-alone houses and housing complexes. The idea was to see whether population density was driving changes in the prevalence of infection,” Dr Kolthur said.

Scientists say the survey does not claim to be representative of the prevalence of the coronavirus infection in the entire city – it was carried out in three of the 24 ‘wards’ or administrative unit areas.

“But we believe the prevalence rate in other areas should not be terribly far away from the numbers in the survey,” Dr Juneja said.

City-wide surveys in other big cites have found a lower prevalence rate among the population.

One of every six London residents, and one in five in New York City, tested positive for antibodies, according to surveys in May and July respectively. A government survey in Delhi in July found that nearly one in four residents in India’s capital has been exposed to Covid-19.

The high prevalence rate in the Mumbai slums could partly be explained by the fact that residents share common facilities such as toilets.

“The results showed how crowding plays a key role in the spread of the infection,” Dr Sandeep Juneja of Tata Institute of Fundamental Research (TIFR) told the BBC.

The study also found that a large section of people had been infected and survived with no or little symptoms, leading to a low fatality rate in these areas – one in one thousand to one in two thousand. This also lowers the city-wide death rate from Covid-19.

And more women were found to have been exposed to infection by the virus in both slum and non-slum areas.

“This is very interesting. We do not know the reason. It could be anything from social behaviour to underlying physiological differences,” Dr Ullas S Kolthur from TIFR told the BBC.

With the cases slowing down in Mumbai, the survey also raises the question whether the city is approaching herd immunity to the infection. Mumbai reported 717 new infections on Tuesday, the lowest in three months. Herd immunity is achieved when enough people become immune to a virus to stop its spread.

“The jury is still out on that. For one, we still don’t know how long the immunity to the infection lasts. We will only know the answer after repeat surveys,” Dr Kolthur says.

The survey is to be repeated in the three areas in August to find out whether the prevalence of the infection had increased or waned, which would offer clues to the trajectory of Covid-19 in the city.

Scientists say the presence of antibodies does not necessarily guarantee protection against the disease, and that the amount of the all powerful neutralising antibodies decides the level of immunity to the infection.

The other problem with Covid-19 antibodies, say scientists, is that their levels have been reported to decline in 90 days. “What will that do to herd immunity or vaccines?” wrote K Srinath Reddy, president of the think tank Public Health Foundation of India, recently.

He says we simply don’t know enough yet on how the ongoing encounter between us and the virus is shaping our immune response. All we can do, Dr Reddy writes, is “wait in hope”. 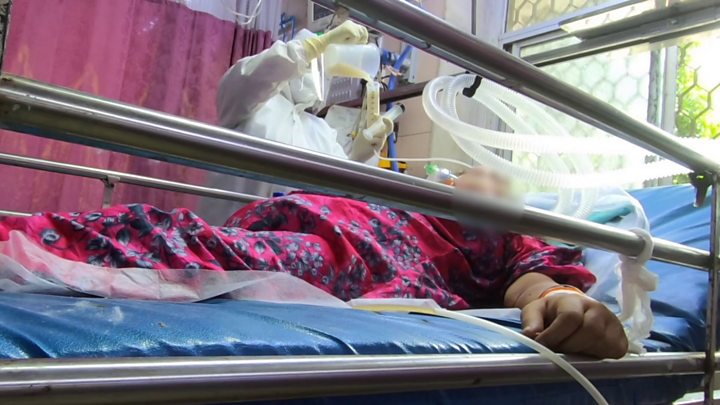 Media captionInside an ICU in Mumbai during the coronavirus pandemic

Trump doing well and could be discharged on Monday, doctors say

Belarus election: Police use live fire on protesters in Brest