This summer, the United Arab Emirates aims to join the ranks of just a handful of elite space-faring countries around the world by launching its first interplanetary mission to Mars. For the last six years, the small Middle Eastern country has worked tirelessly to build a spacecraft that can orbit the Red Planet to study its atmosphere and weather. Now, the mission is set to launch on top of a Japanese rocket.

Know as the Emirates Mars Mission, the project will kickstart a busy summer of missions to Mars. Following this launch, China also plans to launch an orbiter, rover, and lander to the Red Planet on July 23rd. Shortly after that, on July 30th, NASA is set to launch its next rover to Mars, called Perseverance. All of these missions are trying to get off the ground during a very small window this summer when Earth and Mars come closest to one another on their orbits around the Sun. This planetary alignment only happens once every two years, so if any of these missions can’t launch this summer, they’ll have to wait until 2022 to try again.

The project will kickstart a busy summer of missions to Mars

For the UAE, launching during this window is extra important, as the country is laser-focused on getting to Mars by next year. The 50th anniversary of the founding of the UAE is coming up in December 2021, and the UAE wants to celebrate with something big. Back in late 2013, UAE Prime Minister Mohammed bin Rashid Al Maktoum asked the nation’s top space engineers to pull off the ambitious space mission by 2021 to commemorate the occasion. “The timeframe that we had was very, very strict,” Omran Sharaf, the project manager for the Emirates Mars Mission, tells The Verge.

Getting to this point has certainly not been easy. The UAE’s space program has only been in operation for the last 14 years, and the program’s main focus has been building and launching satellites to observe Earth. For this mission, UAE’s space engineers had to design, for the first time, a spacecraft that could handle the harsh journey through interplanetary space. And that meant partnering with various academic institutions in the US to help get the job done. “There was a lot to learn,” Sharaf says. “And the thing is… we didn’t want to start from scratch; we had to learn from others.”

Now, the UAE’s spacecraft — called Hope — is complete and ready for takeoff. If all goes well with its launch, it will travel through space for the next seven months and reach Mars in February 2021. After it arrives, it will attempt to insert itself into orbit around Mars, something only a handful of spacecraft from four international space organizations have been able to achieve.

Before work could begin in earnest on the mission, the UAE had to decide what its spacecraft was going to do at Mars. When issuing the challenge, the UAE government specified that the scientific mission should be unique. “One of the objectives that we had… was ensuring that the science of this mission was complementary to other missions,” Sarah bint Yousif Al Amiri, minister of State for Advanced Sciences in the UAE, tells The Verge, adding that they wanted to gather data that could help answer scientific questions about Mars that have been left unanswered by previous missions.

Most of the spacecraft that have been sent to study Mars are tasked with analyzing the planet’s geology by taking high-resolution images of the Martian surface. Only a few Mars satellites are equipped with tools to study the planet’s atmosphere — including NASA’s MAVEN spacecraft and the European Space Agency’s Trace Gas Orbiter — but no mission has been able to get a global view of the Martian atmosphere closer to the surface.

A rendering of the Hope spacecraft at Mars.Image: Emirates Mars Mission

The Hope spacecraft will give scientists a better understanding of what’s happening in Mars’ lower atmosphere all over the planet and help people learn how the weather evolves throughout the year. The UAE is hailing Hope as “Mars’ first weather satellite” since it will monitor the weather throughout the day in as many locations as possible on Mars.

Such a tool could help planetary scientists learn more about the extreme events on Mars, such as the global dust storms that sometimes engulf the planet. In 2018, a massive storm took over much of Mars, cutting off communication permanently with NASA’s Opportunity rover. “Why does this planet have global dust storms? And why does it go on for such a long period of time?” says Al Amiri. “That’s among the other scientific questions that can be addressed now by this mission.”

“Why does this planet have global dust storms?”

Hope is designed with three instruments to study the Martian atmosphere in detail: two will analyze the planet in infrared and ultraviolet light, while an imager will take visible color pictures of the planet.

Hope plans to take a highly elliptical path around the Red Planet. The orbit will bring the spacecraft in close to the surface ever 55 hours, allowing the vehicle to observe roughly the same parts of the planet at different times of the Martian day. “You’re able to cover all local times, all areas of Mars, and that gives us the consistency that we require to be able to come and say that we do cover the day-to-night cycle for Mars,” Al Amiri says.

Not only did the UAE team face a hard deadline, but they also had to adhere to other tough restrictions in order to build Hope. The UAE government gave them a set budget for the project of just $200 million, and the prime minister wanted the engineers to build the spacecraft themselves — not buy it from someone else. Given all of these stipulations, the UAE team knew they couldn’t do it all on their own.

The Mohammed bin Rashid Space Centre, which built the Hope spacecraft, teamed up with the University of Colorado at Boulder — a college that’s been designing Martian instruments since the 1960s. Engineers in the UAE worked closely with researchers at UC Boulder every day as if they were all on the same team to design and test the Hope spacecraft. “That’s what’s unique about this project,” Sharaf says. “At the end of the day, you had US team members reporting to Emirati and you had Emirati reporting to US team members.”

The Emiratis also received guidance from researchers at Arizona State University and the University of California, Berkeley throughout the course of the spacecraft’s development. Thanks to these more experienced partnerships, the UAE team was able to build a unique and robust spacecraft without building brand-new infrastructure. To communicate with Hope, the Emiratis will also rely on NASA’s Deep Space Network, an existing array of antennas throughout the world designed to connect with interplanetary spacecraft. 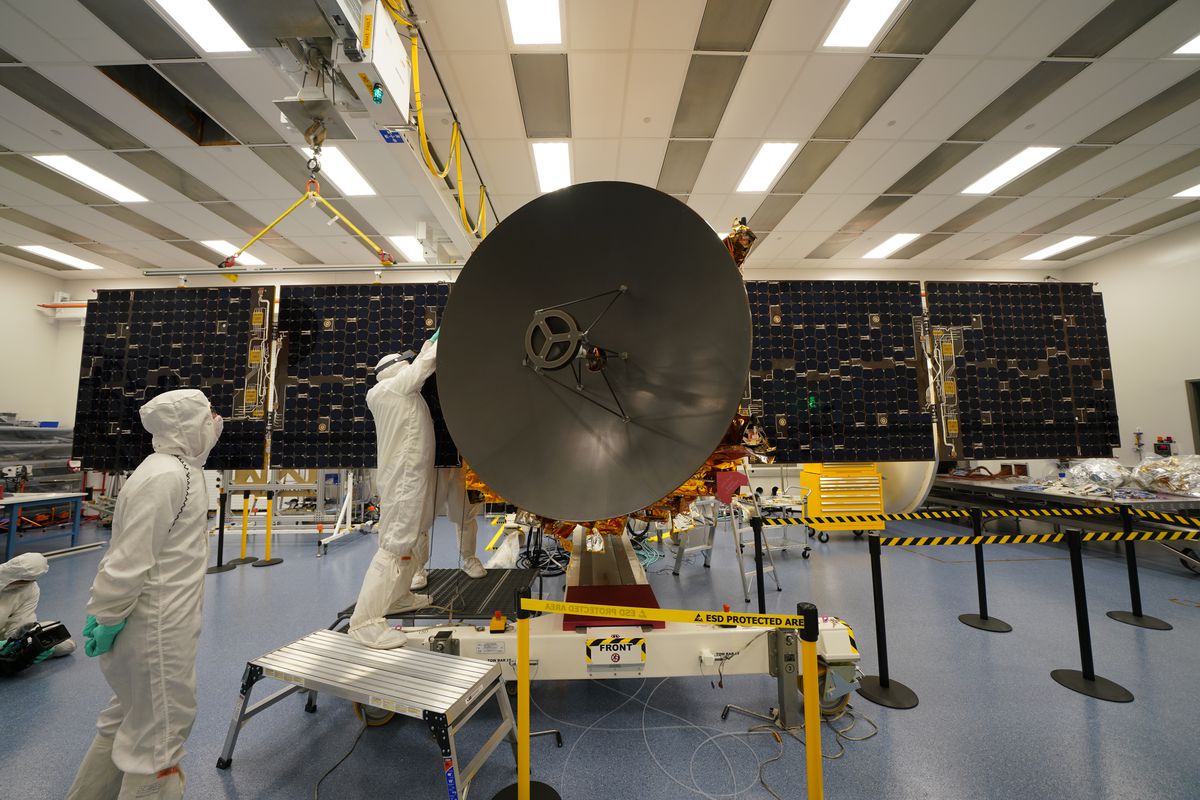 Since Hope is headed so far away, it has to be much more reliable and autonomous than any spacecraft the country has built before. A one-way radio signal can take up to 15 or 20 minutes to reach Mars, depending on where the planet is on its orbit. That means Hope must perform most of its functions on its own, including inserting itself into Mars orbit. When the vehicle reaches Mars, it will have to fire its onboard engines for 30 minutes, slowing itself down from 121,000 kilometers and hour to about 18,000 miles an hour. “You go too fast, you crash on Mars,” Sharaf says. “You go too slow, it skips (on the atmosphere); it’s a critical phase in the mission.”

And if the technical challenges weren’t hard enough, the UAE team had to deal with a pandemic during the final stretch to launch. The engineers had to get the spacecraft to Japan three weeks earlier than planned to adhere to Japan’s quarantine rules. Engineering crews arrived early to go through two-week quarantines before they could receive the spacecraft and eventually help mount the spacecraft to the rocket. “There was a real risk that, after six years of work, we could end up missing our launch window,” Sharaf says. “It was the last thing we had expected to encounter. The transfer was supposed to be routine and now it was mission critical.”

The UAE team is optimistic that the Hope spacecraft will be able to make some significant new discoveries while at Mars. They hope they’ll be able to announce scientific results in time for the country’s 50th anniversary in December. 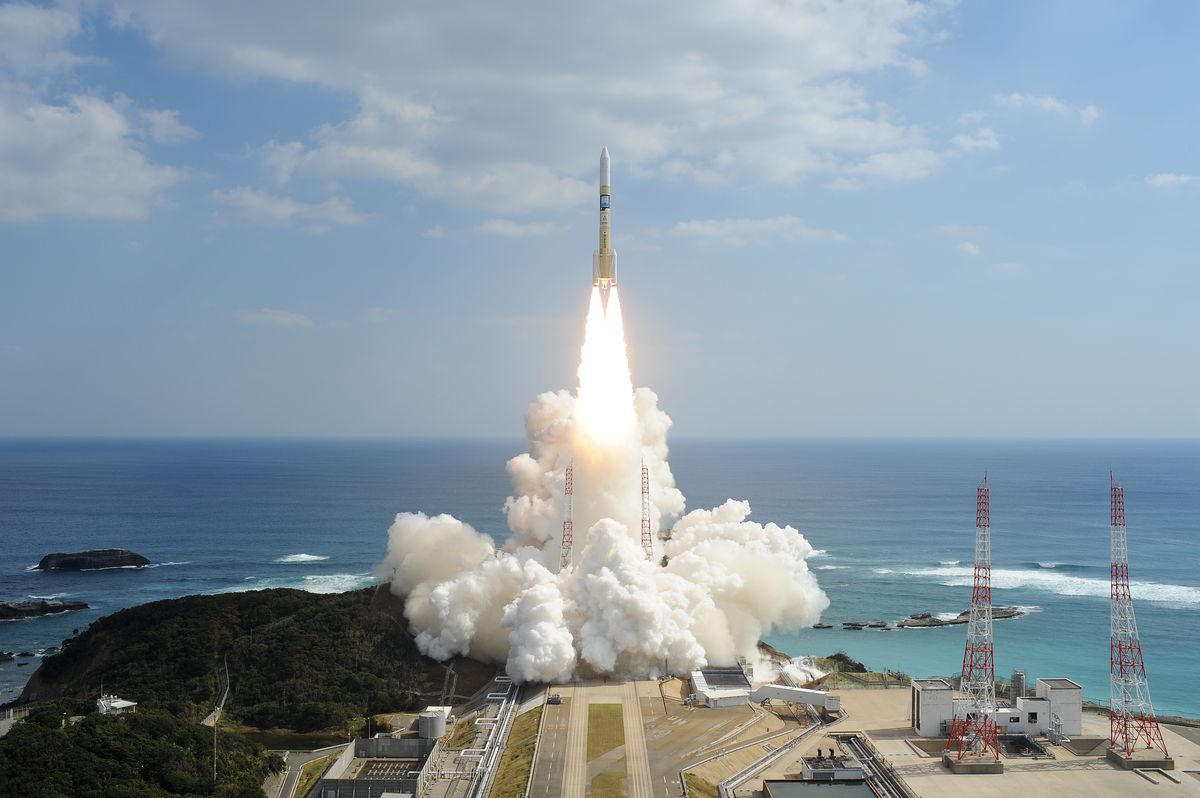 A Japanese H-IIA rocket, which will launch the Hope spacecraft to Mars.Image: Emirates Mars Mission

But even before that happens, the Emirates Mars Mission has already had a significant impact on students in the UAE. One of the biggest motivations for the Hope mission was to inspire Emirati teens to go into STEM fields and to make UAE space scientists role models for children. So far, that mission has been a success, and Sharaf says that more students have been going into STEM fields than ever before. “We saw students switching from international relations and finance, going into sciences; we saw universities that didn’t have any science programs, starting science programs, because of the mission,” Sharaf says. “So that ripple effect of the mission and the impact of the mission actually was quite something that we can see and it’s tangible.”

“The impact of the mission actually was quite something that we can see.”

The UAE team hopes to keep that momentum going — but first, Hope has to launch successfully. The spacecraft is slated to take off in the early morning hours on top of a Japanese H-IIA rocket out of the Tanegashima Space Center in southern Japan on Wednesday, July 15th, in the country. On the East Coast of the United States, liftoff is scheduled for 4:51PM ET on July 14th.

With the launch so close, the team is feeling a mixture of emotions after working so hard on this project after the last six years. “I personally can’t describe them at the moment,” Al Amiri says. “Perhaps ask us after we launch.”

Rihanna Has ‘Stretch Marks’ On Stomach; Fans Wonder If She Had ‘Secret Baby’!