China has appointed a hard-line figure as head of its new security agency in Hong Kong.

Zheng Yanxiong is best known for his role in dealing with a protest over a land dispute in the southern Chinese village of Wukan in 2011.

The new agency, answering directly to Beijing, is being set up to enforce a draconian security law passed this week in Hong Kong.

Opponents of the law say it erodes the territory’s freedoms.

The law targets secession, subversion and terrorism with punishments of up to life in prison.

Several leading pro-democracy activists have stepped down from their roles and one of them, one-time student leader and local legislator Nathan Law, has fled the territory.

Separately, one of 10 people arrested using the new law during protests on Wednesday has become the first to be charged under it. Hundreds were detained during the clashes.

The motorcyclist, accused of riding into a group of police carrying a flag calling for the liberation of Hong Kong, was charged with inciting secession and terrorism.

Beijing has dismissed criticism of the law, saying it is necessary to stop the type of pro-democracy protests seen in Hong Kong during much of 2019.

Hong Kong’s sovereignty was handed back to China by Britain in 1997 and certain rights were supposed to be guaranteed for at least 50 years under the “one country, two systems” agreement.

But China has rejected complaints by the UK and other Western nations that it is in breach of these guarantees as interference in its internal affairs.

What do we know about China’s new appointees?

Mr Zheng’s most recent senior position was as secretary general of the Communist Party committee in the southern province of Guangdong.

But he is best known as party boss in the Guangdong city of Shanwei in 2011 during a protest by villagers in Wukan seeking compensation for land requisitioned by the government.

At the time he criticised the villagers for talking to “a few rotten foreign media organisations” instead of the government about their grievances.

“These media organisations will only be happy when our socialist county falls apart,” he said in remarks broadcast on local TV.

The unrest led to a rare concession by the authorities, with the direct election of a popular local leader. However, five years later he was jailed for corruption and the protests were quashed.

Other appointments by Beijing include Luo Huining, who has been made adviser to Hong Kong’s chief executive on the new security law.

To understand Zheng Yanxiong you need to know about a Guangdong village called Wukan.

In 2011, disaffected locals forcibly expelled government officials from the area, accusing the officials of grabbing their land in a series of corrupt deals with developers.

A blockade ensued and, as part of a negotiated settlement to defuse tensions, the locals were given the right to elect their own council. It became a grass roots democratic exemption in China.

Five years later, the residents – angry that no money had been paid for the stolen land – started marching in the streets again. The situation escalated after their elected leader was taken away by the authorities on what are thought to have been trumped up charges.

The empowered locals were in charge of their own affairs and they believed they could achieve justice. But the Communist Party became fed up with the rebellion and they sent Zheng Yanxiong, who ordered in hundreds of riot police to make mass arrests and seize control. The ‘Wukan experiment’ was crushed.

Since then, Mr Zheng has moved through the ranks, acquiring a reputation for doing whatever is necessary. Now he’s in charge of a new security agency in Hong Kong which operates without any legal restraints whatsoever, and which no other agencies can touch.

What is the security law?

It also allows for closed-door trials, wire-tapping of suspects and the potential for suspects to be tried on the Chinese mainland.

Acts including damaging public transport facilities – which often happened during the 2019 protests – can be considered terrorism.

There are also concerns over online freedom as internet providers might have to hand over data if requested by police.

What has the reaction been from overseas?

US lawmakers have unanimously approved new Hong Kong-related sanctions, with House Speaker Nancy Pelosi saying the law amounted to a “brutal, sweeping crackdown against the people of Hong Kong, intended to destroy the freedoms they were promised”.

Meanwhile, UK Prime Minister Boris Johnson said the passing of the law was a “clear and serious breach” of the 1985 Sino-British joint declaration. 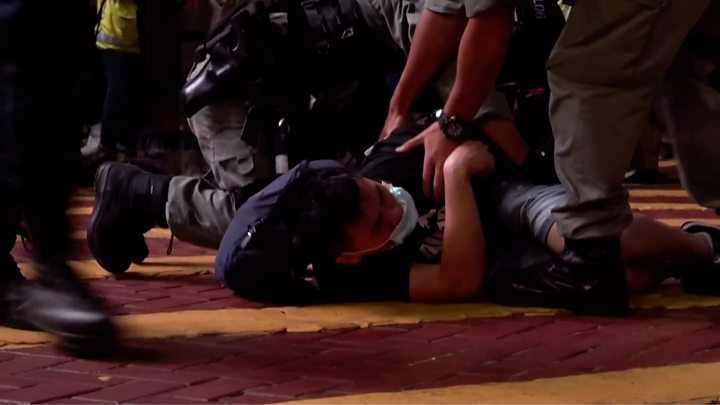 The UK has offered residency, and possible citizenship, to up to three million Hong Kongers in the wake of the law’s implementation.

Numerous others have also expressed strong concerns. Australia revealed that, like the UK, it was considering offering safe haven to Hong Kongers.

China has responded by saying Hong Kong’s affairs are “none of your business”.

However, Cuba – on behalf of 53 countries – welcomed the law at the United Nations Human Rights Council.

Samsung’s Galaxy Tab Active 3 now available in the US

Netflix’s The Old Guard: Where You’ve Seen The Cast Before