Sony’s noise-canceling WF-1000XM3 earbuds have been considered some of the best-sounding true wireless earbuds on the market since their release. But the 1000XM3s lack any kind of official sweat or water resistance, which means they’re not really cut out for running or other fitness use.

With the new $199.99 WF-SP800N earbuds — there’s got to be a better way of naming these things — Sony retains the noise cancellation, adds proper IP55 certification for dust and water resistance, and even extends the battery life to a fantastic nine hours of continuous listening (with ANC enabled). And they are $30 less than the 1000XM3’s launch price, though it’s not hard to find those at a discounted price now.

The 800Ns don’t sound quite the same or as refined as the 1000XM3s, and they still lack wireless charging and simultaneous pairing with two devices. But they pack a bass wallop and offer plenty of EQ fine-tuning. Unlike Sony’s last gym-focused wireless earbuds, these have a more subdued design that clearly takes after the 1000XM3s. On the outside of the earbuds, you’ll see a microphone, Sony logo, and a touchpad for gesture controls. It’s easy to feel when your finger is on that touch area because of its glossy texture and because it’s larger than the circular touchpad on the 1000XM3s; there’s also a nice downward slope that makes it easy to find by feel. The right earbud handles track controls, and the left is used by toggling noise cancellation and ambient sound mode. (Sony still offers its signature “Quick Attention” trick where you can hold a finger down on the left earbud to temporarily boost outside noise so you can hear what’s happening around you.) 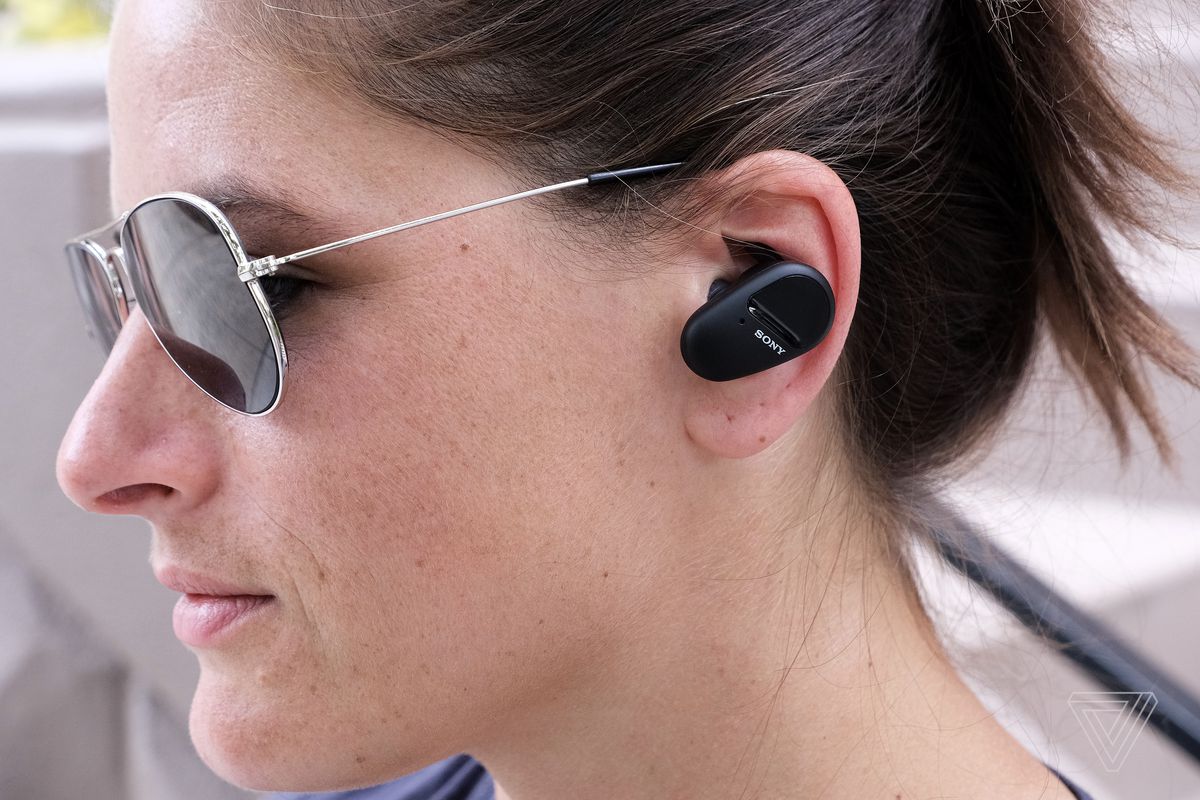 The design is similar to the 1000XM3 earbuds, but sportier. 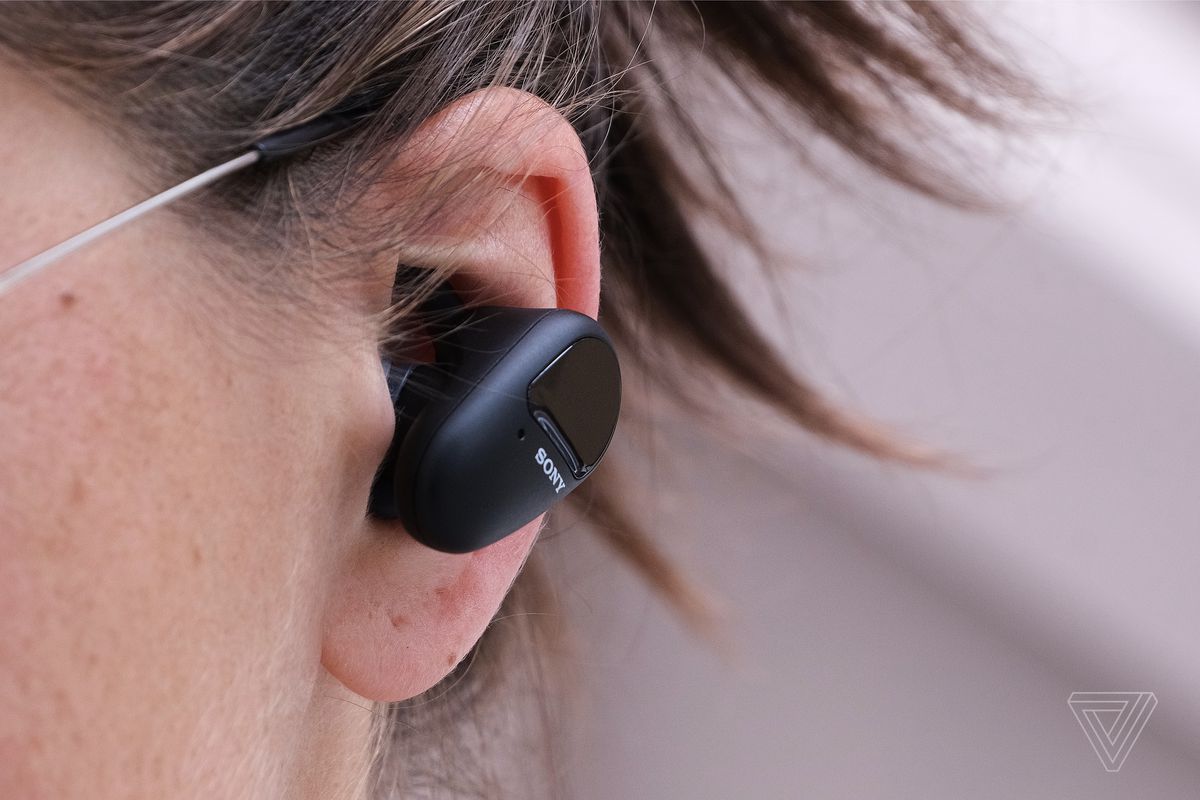 These earbuds jut out from your ears quite a bit.

Sony includes three sizes of silicone ear tips in the box — you lose the memory foam-like tips that come with the 1000XM3s — and two different sizes of support arcs. You can ignore the arcs entirely if you find that the buds stay in your ears securely without them. What’s totally comfortable for one person might cause soreness over time for someone else, so I always prefer them to be optional instead of a permanent fixture of the physical design. (I did manage to tear one of the silicone ear fins, however, so use some care when fitting them.) The downside of the 800Ns is that they’re still relatively bulky compared to competitors like the Jaybird Vistas and second-gen Google Pixel Buds. They protrude from my ears quite a bit but stay planted when I’m running or in the middle of a workout. I never had a problem with them coming loose.

The charging case is rather chunky — not to the level of the Powerbeats Pro, but a step back from sleeker options like the Pixel Buds, AirPods Pro, and Galaxy Buds that can slide into the smallest pocket of your jeans. It only contains enough juice for one extra full charge. If you’re not using noise cancellation, Sony estimates the buds to last around 13 hours, and so you’ll get another 13 from the case. When noise canceling is enabled, both of those numbers drop to nine, which still ranks as some of the best continuous stamina for earbuds that offer the feature. It’s a no-frills case with a USB-C connector and a lone exterior LED to reflect charging status. Unfortunately, these lack the smart design choice that debuted with Sony’s cheapest true wireless earbuds, the WF-XB700s. With those, the top of the case is slightly translucent, so you can be absolutely sure that the earbuds are charging because the red light shines through. It’s now something I wish Sony would do for its whole lineup to avoid any frustrating charging mishaps. 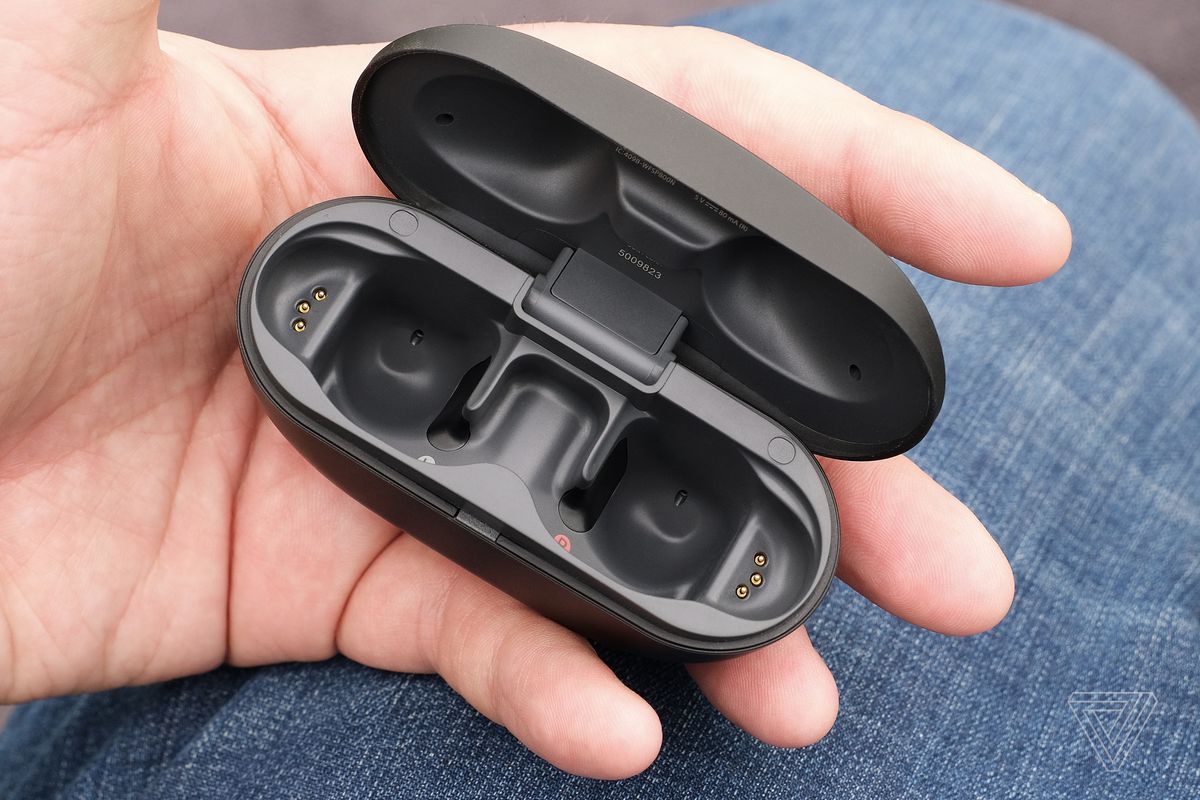 Like the WF-XB700 buds that were introduced not long ago, the 800Ns are tuned with the company’s “Extra Bass” sound profile. And the low end is certainly the star of the show, which should satisfy those looking for a powerful workout soundtrack. The mids are a bit hollow, though this can be evened out some with the EQ controls in Sony’s Headphones Connect app. Music is full-bodied regardless of whether you’re playing a pop-filled running playlist or something quieter. I put on Dizzy Gillespie’s “And Then She Stopped,” and the muted trumpet, piano, and flute all come through with warmth and clarity. But it doesn’t quite feel like you’re in the same room with the instruments, which is where the 1000XM3 earbuds set themselves apart. If you’re looking for the most pleasing sound that Sony’s earbuds can deliver, those are still a rung above the sportier 800Ns. I think the Powerbeats Pro also best these in overall audio quality, but their open design isn’t for everyone — especially if you want noise cancellation. 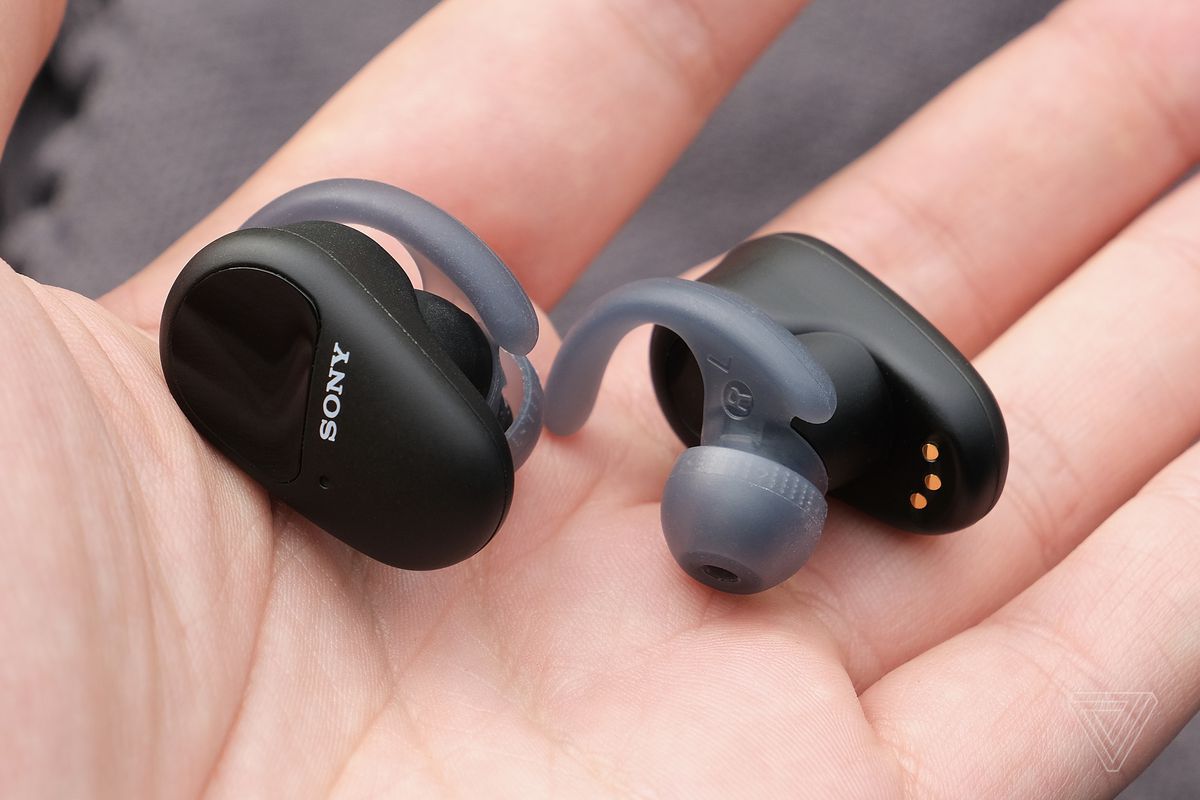 The silicone ear arcs can be removed if you find the ear tips are enough for a secure fit.

Speaking of noise cancellation, while these earbuds do a decent job of cutting out low-frequency hums and other constant noise in your environment, they lack the QN1 chip that helps the 1000XM3s be so effective at muting the outside world.

Sony’s Headphones Connect app offers EQ controls with several presets, and it also lets you choose the balance of ambient sound / noise cancellation that you prefer. There’s an option to have the earbuds automatically adjust this mix based on your activity, but that always feels a little too unpredictable, as the headphones make those changes frequently. More useful is that Sony can now adjust noise cancellation and ambient sound levels based on your location (if you’re comfortable granting the app this information without restriction), so you can set it to crank up NC once you reach the office, for example, or allow in more outside noise once you arrive at a park where you might frequently exercise. The 800N earbuds support Sony’s spatial 360 audio from streaming services like Tidal and Deezer that offer the format. But since they don’t encapsulate your ears like Sony’s full-size headphones, the effect is less convincing.

You can use either earbud individually for audio or making calls. I’d put these earbuds in the middle of the pack when it comes to voice call performance. It’s passable, and no one I spoke to complained about difficulty hearing me or missed words, but Sony still has work to do if it wants to match Apple’s AirPods and the Surface Earbuds. Music will automatically pause when you remove an earbud, and I didn’t notice any audio sync issues when watching videos across several devices.

Since these are so similar to the 1000XM3s, it shouldn’t come as a surprise that they share a frustrating downside: there’s no multipoint pairing to two devices at once. The company is expected to rectify this with its upcoming 1000XM4 headphones, but there’s no telling when it’ll do the same for earbuds; Jabra continues to be one of few companies doing multipoint in true wireless earbuds.

As the middle slot between Sony’s entry-level WF-XB700 earbuds (which can’t be EQ’d or used with the Headphones Connect app) and the flagship 1000XM3s, the WF-SP800N tick off the right boxes for the fitness crowd. They’ve got proper sweat resistance, lengthy battery life, and all the bass needed to fuel your most intense workouts. Even if the noise cancellation can’t match Sony’s best, it’s a key differentiator between these and something like the Powerbeats Pro for people who can’t stand mid-workout distractions.

Photography by Chris Welch / The Verge

THE MOST AWAITED MOVIE SERIES : ‘INDIANA JONES 5’ RELEASE DATE IS SHIFTED TO YEAR...

Maisie Williams Talks About Her Love Life And Her Experience On The Game Of Thrones...